Aside from the generic class of large fighting blades that Jim Bowie forever attached his name to, there’s probably no better-known or more recognizable “fighting” knife in history than the famed KA-BAR of World War II ancestry. The knife was originally developed and manufactured by Union Cutlery and adopted by the United States Marine Corps in November of 1942 as the 1219C2 Combat Knife (later designated “USMC, Knife, Fighting/Utility” and “MKII Utility Knife” for USN issue).

With input from USMC Colonel John M. Davis and Major Howard E. America, the USMC fighting knife was created with a 7-inch clip-point blade, fullers on both sides to strengthen and lighten the blade, a peened-tang steel disc pommel, straight steel crossguard and a stacked-leather grip. Steel surfaces were coated with a non-reflective matte phosphate finish to eliminate the glare. Later modifications switched the center-peened pommel disc retention to a cross-pin through the tang and disc, and the crossguard was slightly curved to the rear. The new pattern was subjected to field trials with favorable results. 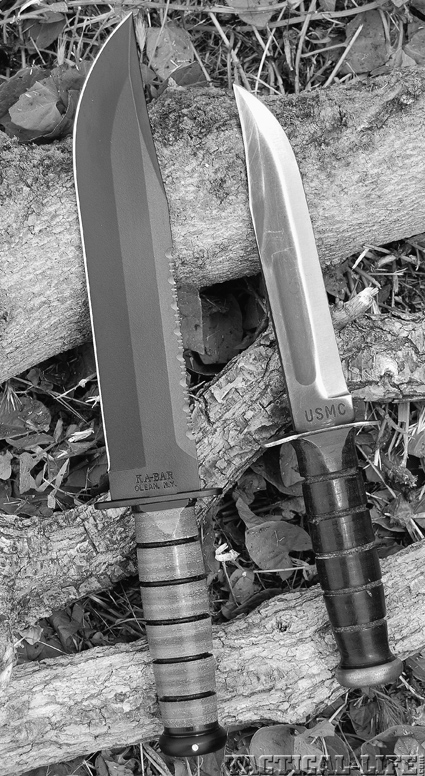 The parentage is obvious, along with the size difference, between the Big Brother on the left and author’s well-used Marine Fighting Knife at right.

It was cheap to manufacture, rugged, had enough blade to reach vital organs as a fighter and enough heft to dig, chop, and de-vegetate in a pinch if it had to. When it began appearing in combat arenas, supply couldn’t keep up with demand, and as many as four different companies supplied the USMC combat knife to the military under contract during the war, and Union Cutlery later changed its name to “KA-BAR Cutlery.” 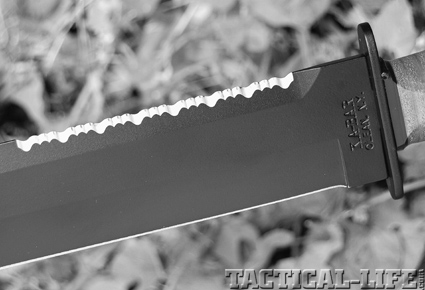 Serrated teeth on the spine are a mixed blessing: good for some types of cutting, bad for batoning and choking up on the blade.