The Zero Tolerance line is a collaboration between the company and Ken Onion plus Strider Knives, has rapidly gained a reputation for making extremely rugged, hard use blades. When you pick up a ZT folder and look at the heavy-duty liners and feel the heft of the knives, you might think you’re looking at a high-end custom folder rather than a production piece. They don’t skimp on materials and they build them to last. If there’s one possible downside to the vault-like construction, it might be that occasionally it might just be too much knife for some folks! While great for military use and uniformed police, some of the ZT knives are a bit hefty for casual EDC use and plainclothes police carry. That’s okay, though, because Zero Tolerance is looking out for those folks too, now, with their new Model 0350, a smaller-sized sibling to the popular 0300 model. 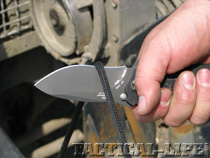 Welcome Little Brother
While the 0350 shares the same lines as its sibling, it’s about 10 percent smaller, a bit thinner and not quite as heavy. The 0350’s are made in the United States and show great attention to detail, having excellent fit and finish. Like all in the Zero Tolerance line, you can tell you have something substantial and well made in your hands when you pick one of their knives up.

The 0350 features a .121-inch-thick, 3-¼-inch S30V stainless steel drop-point, recurve blade with a Tungsten DLC coating. The handle is made up of textured black G-10 handle scales. In a departure from the 0300’s frame lock, the 0350 uses a hefty liner lock mechanism. Overall length closed is 4 5/8 inches, about a ½-inch shorter than its bigger brother. Weight is down to 5.6 ounces, significantly less than the 0300’s 8-ounce weight. Operation of the knife is by way of Kershaw’s patented SpeedSafe ambidextrous opening system. You can either use one of the thumbstuds on either side of the blade to start the 0350 open, or just tap the flipper with your index finger. The 0350 comes with a plain-edge blade, but there is also an 0350st model, which has a combination, partially serrated blade. My test sample was the plain edge 0350.

0350 at Work
I carried the ZT 0350 for about a month at work and ran it through the gamut of EDC chores you’d expect of a working knife. Boxes, tape, cord, plastic zip ties and anything else that came my way fell prey to the 0350’s recurve S30V blade. At just over 3 inches, you have plenty of blade for most tasks you’re likely to encounter in an urban environment. The stout drop-point design is a good all-around choice for slicing, poking and sticking. I’ve long been a fan of Kershaw’s SpeedSafe assisted-opening mechanism, too. My first assisted opener was a Kershaw Scallion and I’ve been hooked on the system ever since. For me, it’s intuitive and extremely fast to tap that flipper when the knife is on its way out of my pocket. I generally find it as easy, or easier, than using an automatic, and it has the bonus of being legal in many places where autos may not be.