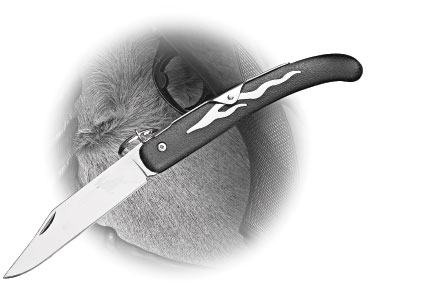 As a group, the knives made for the African trade during the colonial period remain pretty much a mystery to American cutlery buffs. One of the primary advantages of being a European colonial power in the old days was the fact you could control the commerce of the countries you occupied. As a result, a colony was forced to buy products from their mother country that they might not have preferred if they had been free to trade in the world market. In the area of trade cutlery, styles and patterns of knives were often unique to the European country claiming that particular part of Africa. When the colonial system eventually came to an end, many of these specialized trade knives simply disappeared. A few of the more useful ones, like the ring-pull locking clasp-knife, remained standard commercial items all across Africa. 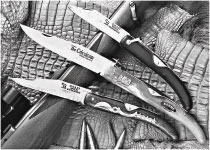 Most of these folders seem to have originally been produced in either France or Germany. I have also seen Spanish folders that were represented as African trade items and I wouldn’t be surprised if others weren’t produced in Portugal, Italy and Belgium. All were major colonial powers at one time and each would have needed trade goods for their own markets. French and Spanish versions tend to have handles made of cattle horn, while the German models usually have some type of wood.

It’s All About Long Shots

As a group, the knives made for the African trade during the colonial period…