Poland has a rich tradition of parachute troops dating back to Free Polish paratroopers who jumped at Arnhem during World War II. This tradition continued throughout the Cold War when Polish airborne forces were considered one of the better units in the Warsaw Pact. Today, the Polish 6th Air Assault Brigade (Airborne) was the first Polish unit to achieve full operational readiness within NATO and remains a key element in Polish rapid deployment capability. Poland has other elite units that are airborne qualified including GROM, the Polish antiterrorist unit; FORMOZA, the Polish combat swimmers; and the Polish 1st Commando Regiment. However, these are special forces rated units. The 6th Air Assault Brigade remains the primary airborne striking force.

Polish paratroopers also have a long tradition of special combat knives. During World War II, Polish paratroopers used various Fairbairn-Sykes knives, including the smooth-handled one often designated as “Polish Paratrooper F-S.” OSS/SOE-type escape knives and gravity knives were used by Polish paras and commandos as well. During the Cold War, Polish paras used a combat knife similar in design to World War II Russian examples. There was also the Polish airborne issue canopy knife that had a blunt tip and double edge. The most interesting Polish paratrooper knife of this period was the automatic knife, which combined a button-deployed blade with various tools inside of the handles.

Today’s Mod 1992
Currently, Polish airborne troops are issued a simple but quite effective combat knife that evolved from the “Noze 62 Ks.” This knife is designated the “Mod 1992” (or Mod. 92). The Mod 92 bears similarities to the U.S. M3 Trench Knife. The blade is just under 7 inches with a 6.5-inch cutting edge. The top of the blade has a 3.5-inch false edge. It has a spear point. At the ricasso, the M92 is stamped with a crown and the name of the manufacturer, “GERLACH.” The crossguard is .16-inch thick and curved on both sides. A rectangular opening in the crossguard is used to retain the knife in the sheath. The handle is ribbed hard rubber with a pommel cap.

The polymer sheath is simple but well designed. It is designed with a loop to take two thicknesses of belt or to affix through lashing to the webbed gear. It comes with a tie-down thong to keep it in position along the leg. The retention system is simple but works quite well. A spring affixed to the edge of the sheath goes through the rectangle in the crossguard and snaps in place to retain the knife. To release it, all the paratrooper must do is press against the edge of the spring and pull the blade from the sheath. A minute ago, I stopped typing and turned my M92 upside down and began to shake it vigorously. The knife stayed securely in place.

The M92 Polish Airborne/Air Assault Knife is an excellent example of a well-designed, yet inexpensive, general issue military knife. It is an effective close-combat knife which can also be used to cut loose a parachute or for other utility tasks. I believe that Polish paratroopers are still issued specialized shroud-cutting knives as well. The advantage of the inexpensive design of the M92 is that if one is lost during a jump or helicopter insertion or otherwise operationally, it can be replaced readily. The fact that it is designed as a tough general issue knife means, too, that it will probably receive a lot of use and if worn out, can be replaced readily. My impression of the M92, however, is that it will take quite a bit of usage to wear it out.

On a side note: In a book I own on Polish military knives I have seen photos of what appear to be fancy versions of the M92. In that same book I also saw photos of what appear to be a hollow-handled survival knife. I don’t read Polish so I am not sure if this knife was developed for Polish special-ops troops or not. I will note that members of GROM train constantly with the U.S. Special Forces and the British Special Air Service, and some operators have acquired U.S. equipment including 1911-type pistols and custom combat knives.

To get back to the Model 1992 Polish Airborne Knife, however, I like the knife because of its simplicity. It gives the Polish paratrooper an effective knife but not one that will cost him a week’s pay if he loses it. Simple but effective is almost always best for military issue knives. 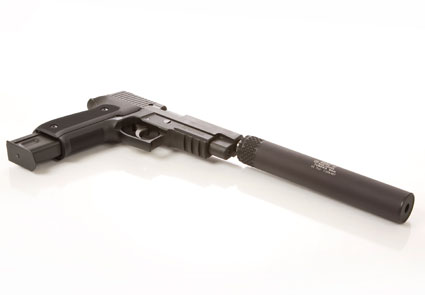