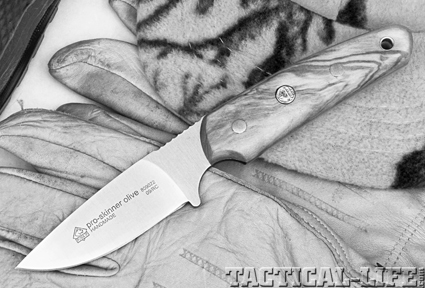 With its attractive olive wood handle scales, drop-point pattern blade and recessed choil, the Puma Pro-Skinner is well designed for its intended purpose. However, the knife can easily handle an extended role as an effective field-dressing tool.
Comment(s)

Puma knives have always held a certain fascination for me. One of my very first big game knives was a Puma folder. Regrettably, that knife accidentally ended up in the garbage disposal and was damaged beyond repair. Anyway, sometime later I acquired another Puma knife, this time a traditionally designed fixed-blade skinner. To date, I’ve used that old knife on every manner of big game, from elk to eland.

In the early 1980s I had the opportunity to visit the Puma factory in Solingen, Germany. At that time it was located in a spacious three-story house, far away from the center of town. The fact that the production facility was in a suburban neighborhood allowed the factory to escape Allied bombing raids that virtually destroyed the other cutlery factories in Solingen during World War II. Needless to say, I was deeply impressed with the knife building that went on there. Unlike many of our own cutlery factories that operate on a much larger scale, what went on in the Puma plant was more like watching the creation of a hand-made knife.
Puma knives have been produced continuously since 1769 when Johann Wilhelm Laughter added his trademark to the roll of knife makers in Solingen, Germany. More than 100 years later, the name “PUMA-Werk” was also entered into the Solingen register of companies producing cutlery. And by the early 1920s Puma knives were being exported far beyond the borders of Germany. In the late 1990s, the original factory was destroyed by fire. However, this internationally recognized company quickly shifted production to a new modern industrial park.

Puma Prowls On
Currently, Puma continues to expand its range of knives to include cutlery produced in their Solingen facility, knives designed in Solingen and made in Spain (Puma IP), and other edged products produced in conjunction with partners at off-shore locations (Puma Tec). When looking over the entire Puma product line at a SHOT show, both expansion and diversity were clearly evident. 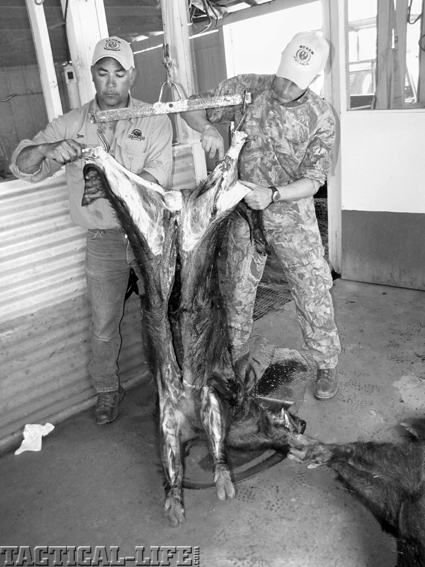 While the Puma Pro-Skinner needed some edge restoration effort during skinning, the knife performed well beyond expectations during what is a notoriously difficult assignment.

Since all of my previous experience with Puma had been limited to traditional models, I wanted to try one of the new IP (International Production) models that was made in Spain. I selected a Puma Pro-Skinner (Model 80-9022) fixed-blade. This particular knife features a 3-inch, full-tang, drop-point pattern blade crafted from 440C stainless steel, with a Rockwell hardness of 57-60 HRC. Interestingly, if you look closely at the blade near the juncture of the tang and handle, you will see a slight indentation. This is the point when the Rockwell test needle was impressed into the blade. This is something that’s done with each Puma blade and is unique to the company.

On the back of the blade, just forward of the handle, a short series of irregularities (jimping) have been cut into the steel for added thumb purchase. Furthermore, a recessed choil cut-out is located just behind the integral guard which allows for enhanced cutting management and grip control. The scales are olive wood, a natural product that has dramatic figuring. The handle itself is tapered from front to rear.

While I wanted to put the knife to work, hunting season was long past. However, coyotes and wild pigs can be pursued year-round in the state where I reside. Partnering up with a friend, we spent the better part of a day hunting predators and hogs along the edge of the high desert. As luck would have it, an hour after sunup we had both a coyote and a big old boar on the ground.

Field Test Results
The Puma Pro-Skinner sailed right through coyote hide removal chores without any edge degradation. However, working my way through porcine field dressing and skinning was somewhat more difficult. While the knife handled the assignment, the edge needed an occasional touch-up. And that’s the good thing about 440C stainless. It’s relatively easy to maintain in a field setting.

With many old-time cutlery factories having gone out of business, it’s gratifying to see that Puma knives is not only growing in the international market, but also expanding their cutlery line. The recent acquisition of this knife line by Puma Knife Company USA is certainly a step in that direction. For more information, go to Pumaknifecompanyusa.com or call 918-888-5524. 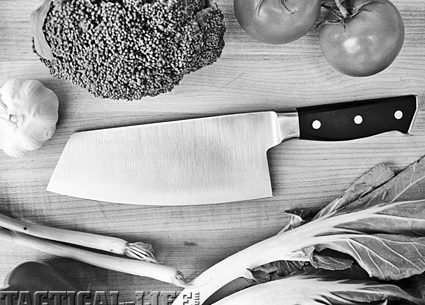 Puma knives have always held a certain fascination for me. One of my very…