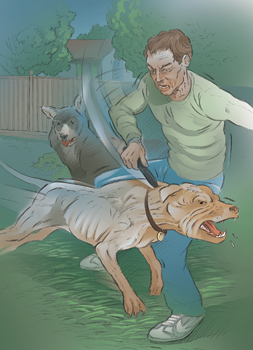 Being a subscriber to Tactical Knives magazine, I have been educated as to the prudence of carrying a knife on a daily basis. I am the proud owner of two quality tactical folders. My “Sunday-go-to-meeting” knife is a Benchmade AFCK with a blade made from D2. My everyday carry, on the other hand, is a Cold Steel Recon tanto point. Both knives share the common attribute of having a 4-inch blade. The Recon is the knife that is at my side 24 hours a day. (Yes, it has a place on my nightstand next to the alarm clock.) I rely on this knife to handle all of the utilitarian chores that one would normally expect. I found out the hard way that it can be relied upon for life’s unexpected challenges as well.

My wife and I recently adopted a five-year-old border collie/sheltie mix that came in need of a new home when her elderly female owner passed away. Not being dog owners previously, our backyard is unfenced. Knowing that this would have to be a priority we began to budget and save for this expenditure. Until then, we would take our dog outside on a leash for her daily exercise.

People, like animals, are creatures of habit. It didn’t take long before our routine was established. Immediately upon arriving home from work, I take my new best friend outside, as she yearns for fresh air and green grass by this time of day. This is quality time for the two of us as I still continue to work at developing a bond with my canine companion. For the past three weeks, every day has been like the day before—until yesterday.

We had been outside for about 10 minutes when, without warning, two large dogs entered our yard at a dead run and headed straight for us. Crossing the yard took only seconds and they arrived with bared teeth. I immediately choked up on my dog’s leash and pulled her sharply behind me using my left hand while at the same time taking a defensive posture in front of her. My right arm waved frantically in an attempt to dissuade the pair from their obvious intentions.

The primary aggressor was a female pit bull, approximately 50 pounds in weight. This dog appeared to be possessed and was totally focused on my dog, seemingly oblivious to my presence. The second attacker was only slightly smaller in size and weight, a black mixed breed of unknown ancestry. This one was following the lead of the pit bull as they worked in unison to find a way around me. My focus was on the pit’s nose as this was my best indicator as to which way the pair would move next.

Just as my endurance and patience were starting to wane, the black dog broke off and started to circle around to my left in order to gain a vantage point to our rear. At this moment I knew we were in serious trouble. I drew the Recon from the right front pocket of my jeans and, with a flick of my thumb and a snap of my wrist the blade opened and locked with authority. As I pulled my dog closer in an effort to keep her as far away from the circling mixed breed as possible, the pit bull, for the first time, turned her attention to me. She lunged, jaws snapping in anticipation. I sidestepped to the right and without hesitation, using a firm saber grip, thrust the Recon to a point of impact behind the left front shoulder of the pit bull.

Insertion was effortless and penetration ceased at the blade/handle juncture. The pit bull let out a blood-curdling yelp, at which point the mixed breed broke off the attack and ran away. The pit bull spun around and ran back in the direction from where the pair originally came. She covered approximately 25 to 30 yards and collapsed, expiring in the front yard. The attack was over. The incident was reported to the appropriate authorities and the pit bull’s owner located with the help of county animal control. He was notified by telephone. Apologies were exchanged. His regarding the animal’s behavior and for the fact that it had gotten loose, mine for having had to take such a drastic course of action. Due to the lateness of the hour and the distance the dog had traveled, the owner declined to claim the remains. I buried the dog in my back yard not more than 10 yards from where the attack occurred.

They say time heals all wounds. I’m not so sure. I will never forget that pit bull or the viciousness that she displayed. However, when I look out across my back yard to the location of her grave, I will be reminded of what the outcome of that incident could have been had I not been prepared.

My best advice: Choose your blade wisely and carry always. 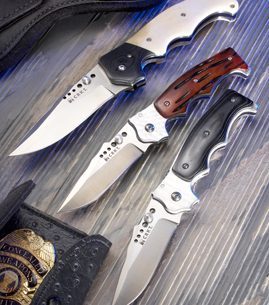 We review an array of new knives and knife products on the cutting edge.