A knife enables the only species on earth that lacks natural weapons and tools to not only survive, but to prevail. Without a cutting edge, the strongest man is hard-put to even halve a length of rope. A knife is the human solution to the problem of having been denied teeth and claws, and survival experts are unanimous that no tool of survival is more vital than a good knife.

The RSK (Ritter Survival Knife) Mk5 reflects a clear understanding of the life-saving value a good blade can have in daily life, whether the jungle you must survive is concrete or forest. Designed by survival equipment authority Doug Ritter, creator of www.equipped.org, in collaboration with custom knife maker David White—himself the creator of the Shrewd Survival Knife (SSK)—the RSK Mk5 reflects Ritter’s credo that, “If it isn’t with you, it can’t save you.” 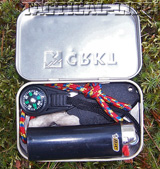 Practical Perfection
Latest in a line of survival knives that have been born of Ritter’s creativity and experience, this new survival knife defines clean, bare-bones practicality, which might explain why Columbia River Knife and Tool is its manufacturer. With an overall length of just 3.81 inches, the Mk5 is hardly a Rambo knife; as CRKT’s press release points out, this blade “is not a knife you would use all day for normal work tasks.”

But the little skeletonized knife isn’t intended to be the best survival, hunting, or fighting knife. What this knife is meant to be is a constant companion, a knife that you can forget about until a need arises and you suddenly remember that you have the means to cut a climbing rope, gut a fish, or extricate yourself from a dark urban street dilemma. Its 1.75-inch cutting edge can’t whack through the pelvic bones of an elk or properly run through an insurgent, but the RSK Mk5 guarantees that its owner can always have a functional drill, wedge, scraper, awl, and all-around cutting tool.

Probably most heartwarming, this latest knife in the Ritter-designed lineup has been sensibly engineered to be a serious tool of survival. The ergonomically contoured skeleton handle and blade are ground from a single piece of tough 3Cr13 stainless, hardened to an edge-holding Rc of 52-55, and stone-washed to a non-reflective satin finish. The Mk5 is sharp, it holds its edge, resharpens easily, and it can withstand an impressive degree of field abuse. Traction grooves at the spine and cutting edge of the blade provide sure grip and control.

With its 2.06-inch-long handle—arched to maximize grip area and blade control—held by the first two or three fingers on one side and thumb pressure from the opposite, this little knife rates being called a survival knife. Its nimbleness in the hand is actually a little surprising. The Mk5 is very capable when it comes to skinning small game, filleting fish or whittling a snare trigger. The skeleton frame of the handle can be wrapped with several yards of string or cord, increasing its girth and comfort in the hand, while ensuring that its user has a ready supply of cordage.

The lanyard that comes attached to the RSK Mk5 is a functional part of the knife. By holding the cord in your fist or looping it over one finger, the lanyard helps to keep the knife more stable in your grip. And I like that the multi-colored cord makes the knife harder to lose.

Carry Choice
Because no piece of gear is useful if it isn’t available, the Ritter Mk5 offers two habit-causing carry modes: around the neck on a lanyard, safely in place but available in a molded glass-reinforced nylon sheath, or as part of a survival kit in the included hinge-top metal box. The box, identical to the Altoids-brand mint cans but handsomely marked with the CRKT logo, exploits the compulsion of outdoors lovers to organize equipment into kits that are always at hand. Altoids and Sucrets boxes have been used as the housing for pocket survival kits for several generations, and the Ritter’s box demonstrates why these containers are already popular for survival kits.

Our test knife fit into the box with room left for a full-size disposable butane lighter, a small liquid-filled compass, a dozen fish hooks and split-shot, and a 20-foot coil of 20-pound test fishing line. A length of paper towel folded into the box’s bottom keeps contents from rattling, and two or three elastic hair ties hold the lid shut through hard knocks. The kit also contains a list of survival tips composed by Doug Ritter to help owners streamline their kits and maximize its value as a full-time companion.

Buttoned down in a breast or cargo pocket, this kit holds the basic three must-have survival tools—knife, compass and fire starter—plus a few amenities, and carries so unnoticed that you might forget you have the means to survive almost any situation. Suggested retail for the RSK Mk5 is easy on the wallet at $26.99, which includes hinged metal box, knife and friction-fit molded sheath. For more information, visit www.crkt.com or call 800-891-3100.