0
SHARES
5
VIEWS
Share on FacebookShare on Twitter
Top: The Rock Creek Eland; Bottom: the Oryx. Both knives have the classic lines of a 1960s custom combat knife. Styles may change but the job seldom does.

After you have been around the industry for a few decades, you start noticing knife styles seem to be very prone to faddish cycles. What one generation considers the ultimate design for hunting, combat, or camping, the next thinks is totally inadequate. You only have to look at the old Marble’s Woodcraft to see a classic example of this phenomenon. During the early 20th century, the Woodcraft was hailed as the perfect outdoorsman’s blade and was copied by practically every cutlery company in the business for the next 50 years. The Marble’s model was even the official sheath knife of the Boy Scouts of America before WW-II. Along came the Loveless style “4-inch drop-point” during the late 60’s and the Woodcraft pattern almost disappeared from catalogs. Did field dressing a deer radically change? I don’t think so; it was just that the new prevailing “in” style transformed another from “state of the art” to “old fashioned.”

As another example, from the 1940’s to the 1960’s you could pretty much count on a combat knife having a leather washer handle, a heavy metal guard and pommel and a medium-length, clip-pointed blade. Then came Micarta, G-10, tanto points, Kydex sheaths and serrations for everything. Did combat change so much or are these materials that are superior in the field? I, for one, don’t necessarily think so. With that in mind, I was especially pleased to see the “retro” look of Rock Creek Knives’ (a new division of CAS Hanwei) “Eland” and “Oryx.”

The Specs
The Eland offers a 6-3/4-inch blade with a clip-point and a full-length unsharpened false-edge. The Oryx is slightly smaller with a 6-inch saber ground clip-point. Both knives are forged from Hanwei’s proprietary “HWS-1K 1/4-inch-thick steel and hardened to an Rc of 58-60. Not much information is provided on HWS-1K but it is made by Hanwei and promoted as being a “high-alloy forging steel” having “excellent corrosion resistance.” In keeping with the retro look, the handguards and pommels on both knives are stainless steel and the grips, stacked leather washers. The knives come in heavy leather scabbards with steel-reinforced mouths and tips. The Oryx weighs 15 ounces in the sheath, while the Eland only tips the scales at a half ounce more. CAS’s suggested retail price for either knife is $129.

In recent years, Hanwei has made a name for itself as a producer of high quality Japanese-style martial arts blades that combine both traditional and modern methods to keep the costs down to an affordable level. Having watched a DVD of the company hand forging katanas, I’m very impressed with their desire to produce functional weapons rather than the pot metal wall hangers many sword companies offer. Their new line of combat and outdoor sheath knives shows this same attention to quality as their swords have.

Combat Sharp
While a case might be made that the factory edges on this pair of blades were “combat sharp,” I felt they were not up to my own personal standards for a knife I intended to carry. It took me around five minutes work on a combination of Norton medium-silicon carbide and fine India benchstones to have the Oryx shaving sharp. Though 1/4-inch-thick on a 1-1/8-inch-wide blade is a little beefy for good manila rope slicing, the knife did bite through the first braid without problem.

While either of these knives would make an excellent combat/utility blade as is, if I were looking for a dedicated “fighter” I would start with the Eland. It would be a very simple matter for any custom knifemaker to grind the first 3 inches of the spine back from the point to a fully functional cutting edge. You can also do this yourself by hand on a coarse benchstone but it will take a little longer. Once honed, you have both the option of using backcuts in close-combat and having a blade that will penetrate easier on thrusts. As any experienced bow hunter will tell you, it is far more effective to slice through your target than to simply push muscle and internal organs aside as a blade penetrates. For that matter, it wouldn’t be that big of a problem to sharpen the full length of the Eland’s spine, but I feel this would limit its normal utility in the field. Ultimately, the choice is yours.

Field Testing
Being a firm believer in evaluating knives by cutting something that needs cutting rather than the “simulated” workbench field testing used by some, I used the Oryx to quarter up a large poultry fryer. After all, these knives were designed to cut flesh and once you are through the hide/skin, there is very little difference in resistance between animals. The knife’s edge geometry proved excellent for the task and I quickly cut through wing and leg joints, split the breast lengthways and then those two sections into two more and finished by cutting the back into two pieces. Both the breast and the back involved some light bone cutting, which the edge of the knife survived without any damage. 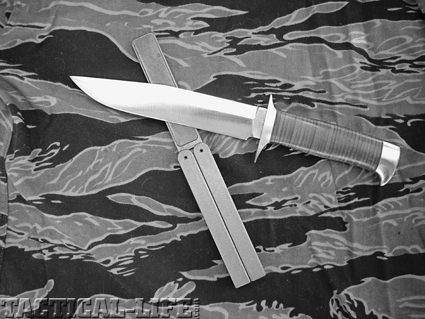 Being able to easily resharpen a blade in the field is probably more important than pure edge-holding ability for combat troops. It took me exactly 4-1/2 minutes to restore the Eland to arm-shaving sharp with this EZE-LAP diamond hone.

The Eland
Because the Eland looked like a knife I personally would have been happy to carry back in my Vietnam days, it ended up being the model I spent the most time evaluating. If all you have is a blade for a tool, you end up using it for whatever is required. As a result, military knives see all sorts of use as improvised life-savers in very abusive situations. While I personally don’t expect them to hold an edge through these demands, I do look for something that will survive without major blade damage and that can be resharpened relatively easily later.

For starters, I cut a 10-inch hole in the top of an old galvanized metal garbage can lid. Right or wrong, most combat and survival knives usually end up serving as digging tools for a wide variety of reasons so I tried digging out the roots of some sour dock sprouting in our garden. This experiment proved less than totally successful because dock roots seem to grow halfway to China, but it did dull the blade up even further. While not part of my original plan, I then attempted to cut the tops off a number of onions that were starting to bolt only to discover the knife’s edge was now too blunt for even that simple task.

Having dulled the blade beyond the point of any practical use, I timed myself using a small EZE-LAP diamond hone to resharpen the super-dull edge. In my opinion, these small diamond hones are the ideal sharpener for military and survival use. It only took me around 4 minutes and 30 seconds to have the knife back to arm-shaving sharp. Frankly, I was expecting it to require at least twice that long.

The Sheaths
While, as mentioned earlier, the sheaths supplied with both knives are of very heavy, double-stitched leather, they are not stained or treated for water protection in any way. I suspect those carrying the knives for military use will want to stain the leather black or dark brown. A thorough coating of a wax-based leather waterproofing product would also be a good idea.

Many of the theories about the ideal construction of a combat knife—stainless steel, Micarta handles, Kydex sheaths and the like, have their roots in the hot, wet jungles of Southeast Asia. I see no reason why the more retro materials of these CAS knives won’t be perfectly adequate in the hot, dry deserts of Iraq or the cold, snowy mountains of Afghanistan.