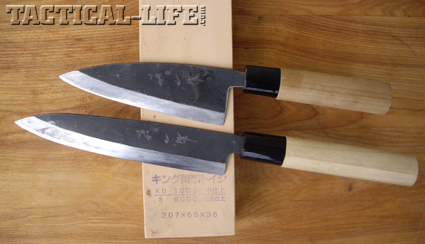 One of the truths I’ve learned over the years about cutting edges is that “sharp” can have radically different meanings from one knife user to another. For instance, everyone that has ever hunted in Africa comes back with stories of the skill shown by the professional game skinners there. While that would be remarkable in itself, it is when you actually handle the knives they use and watch them being sharpened that you really start to be impressed. The skinner on my own hunt a few years ago simply picked up a rough chunk of something like sandstone off the side of the road, opened his Okapi folder and pulled it straight up and down a few times on a semi-flat surface. When I say “up and down,” I mean something like the motion you would use if you were cleaning a bottle with a long-handled brush, not the into or away from sweeps most of us have been taught. It might be easy to assume he had some special sharpening technique known only to African skinners, but when I examined his folder, I found the freshly “sharpened” edge way beyond dull by my own standards. Dull or not, he used that same knife to quickly remove the hide from a waterbuck, an animal about the size of an American elk. The $1.50 knife may have received a couple of quick touch-ups during the job, but not much more than that.

Then there is the comparison of Chinese versus Japanese kitchen techniques. The current popularity of traditional style Japanese kitchen cutlery has created the need to learn how to use an entire battery of ever finer grit stones to polish an incredibly smooth edge on each. Cooking methods may vary but, frankly, I don’t consider the basic ingredients of Chinese cooking that much different from those used in Japan. Where the Japanese have a collection of specialized cutting tools for each item, the Chinese have one basic knife pattern—a large, square cleaver. And if you read enough Chinese cookbooks, sooner or later you will find one that states something like: “Your cleaver must be kept very sharp! Hone it frequently on the concrete street curb outside your house.” As Murray Carters’ first sharpening DVD demonstrates, a skilled sharpener actually can do a reasonably good job on common cinder block!

What’s The Difference?
Obviously, there is a world of difference between “sharp, honed on a concrete block” and “sharp, honed on an 8,000-grit waterstone.” Yet, the chefs from both countries are famous for their knife skills. Of course, maybe that is the point; just like the African skinners, it is their personal skills with a knife that really set them apart.

When it comes to sharpening Chinese style cleavers, you can’t go far wrong by simply looking around the kitchen utensil section of the local Asian grocery store. Along with the usual vegetable cleavers, there will almost always be a few large, double-grit carborundum benchstones. All are imported straight from China, so I’m assuming they are similar to what chefs in that country would normally use. What makes them especially attractive is the price. The Wok Shop of San Francisco, for instance, sells a 12-inch-long stone for $5.95.

While these inexpensive carborundum stones don’t leave the smooth, polished surface of a fine grit waterstone, I have found them to be excellent for tools like axes, machetes and other rough-use cutting tools. When used on the standard cleaver, they leave a slightly toothy edge that bites into vegetables and raw meat very well. I’m not sure what is used for a stone lubricant in China, but I have found water works adequately for me when sharpening cleavers. It is obviously nearly free and certainly creates far less mess than oil. You also don’t have to worry about it ending up on the raw foods you are cutting.

Ultimately, while skill is equally important to the keenness of its edge, for most of us, “sharp” will also make the job much easier.