0
SHARES
2
VIEWS
Share on FacebookShare on Twitter
There will be a small amount of leakage as the bottle opens, but the show is well worth a bit of spilled champagne.

In the late 18th or early 19th century, a tradition began that is still practiced today. As the story goes, Madame Clicquot, a rich young widow who had inherited her father’s vineyard, would host young officers of Napoleon’s fearsome Hussars. The young cavalrymen, always wanting to make an impression on the young heiress, would open bottles of champagne in a grand fashion using their sabers.
Today, sabrage, the art of opening champagne with a saber, is generally performed by only the most experienced sommeliers (wine stewards). Although often assumed to be a tradition of the rich and famous, sabrage can easily be performed by anyone and is a unique accompaniment to a toast. First, we will examine a historical sword that would have been used for sabrage in the 19th century. Then, after looking at a cost-effective modern reproduction produced by CAS Hanwei, there will be a brief tutorial on opening your own champagne bottles. 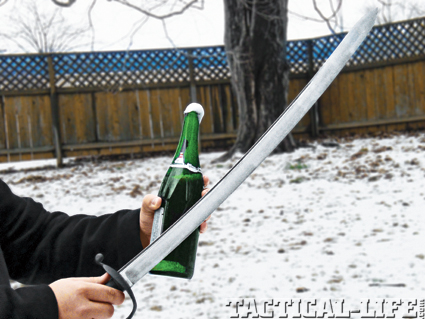 The CAS Hanwei Revolutionary War Hanger is quite effective at sabrage. There was very little spillage with this bottle, and the glass broke evenly.

Hangers
One of the swords most likely to have been used for sabrage was a “hanger.” These were short, curved swords used by both foot soldiers and sailors throughout history. Even with the massive technological revolution happening in Europe during the late 18th century, these swords continued to be very popular among regular men-at-arms. Since they were one of the most ubiquitous sidearms of the colonial era, they were also commonly commandeered by some unsavory characters (pirates, scallywags, and the like). It is very clear when looking at one of these swords why it might be useful. With a wide blade, it is both stiff and strong, clearly designed for chopping. The short length makes the sword much easier to use in confined areas, especially those found on ships or in buildings. Because it is fairly tip-heavy, the hanger effectively cuts through rigging, cloth or brush. The hanger was a weapon as well as a tool, much like our modern day machete. Featured here is a French Infantry “briquet” that was made between 1822 and 1824. This places it right after the Napoleonic wars, and is one that would likely have been used for sabrage in the early 1800s. 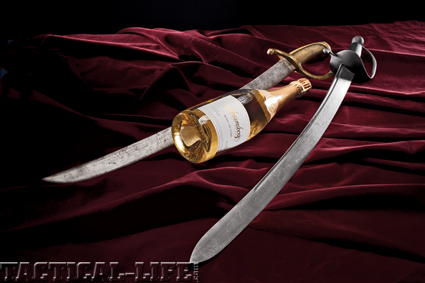 Except for a few small details, the CAS Hanwei Revolutionary War Hanger accurately reproduces a cutlass from the time period. The screw-on pommel is preferable for most purposes, and the wooden scabbard adds to the overall package.