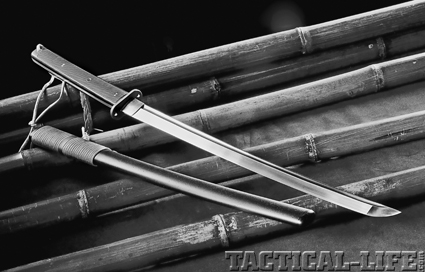 The C.A.S. Hanwei Tactical Wakizashi provides the modern martial artist with an all-purpose cutting tool that is still up to the demands of traditional Japanese sword craft.
Comment(s)

Swords have a very special allure that “calls” to a surprisingly broad audience. Whether you’re a serious arms collector, a historian, a martial artist, or even a gaming enthusiast, the idea of owning a sword that reflects your character is not at all uncommon. Although there is no shortage of long, shiny blades out there, the more serious you are about swords, the harder it is to find one that is functional and truly combat worthy. And if you are lucky enough to find such a sword, you might find yourself paying a kingly price to make it yours. Fortunately, a few companies have recognized the need for high-quality, historically authentic swords that can be offered at affordable prices. One of the pioneers of that effort—and still one of the industry leaders—is C.A.S. Hanwei.

Hanwei was founded by Paul Chen, a Taiwanese native who grew up with a fascination for swords and armor, but pockets too shallow to afford authentic historical pieces. To satisfy his craving, he became a custom maker, producing highly regarded handmade swords for discriminating clients in the U.S. and Asia. In 1991, Chen moved to Dalian, China, also known as “Steel City,” to assemble and train a group of talented sword and knife makers. In 1993, Chen officially established Hanwei and began trading under that banner. Hanwei’s early production focused primarily on Japanese-style blades, but within a few years they expanded to include authentic, fully functional European-style swords as well.

The Tactical Wakizashi
To commemorate the 25th anniversary of C.A.S., the company introduced a number of unique new items in their 2010 catalog. One of the most distinctive is their “Tactical Wakizashi,” a utilitarian take on the Japanese short sword that, according to their catalog, is intended for “strenuous outdoor use and protection.”

The “Tactical Wak” is based on C.A.S. Hanwei’s Raptor wakizashi, a traditional style of short sword specifically tuned for modern applications by renowned sword expert James Williams. Unlike classic Japanese blades that feature edge geometry optimized for cutting flesh, Williams and Hanwei designed the Raptor blades for cutting both soft and semi-hard materials. Forged from high-carbon 5160 steel, these specially designed blades replicate the thickness and weight of traditional blades, but are heat treated to be more resilient and more forgiving of imperfect cuts. This makes them ideal for sword users interested in cutting materials other than straw mat targets. 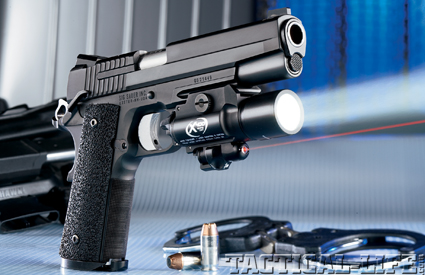 Swords have a very special allure that “calls” to a surprisingly broad audience. Whether…