0
SHARES
8
VIEWS
Share on FacebookShare on Twitter
Grayman’s first folder, the Satu, comes as close to the Holy Grail of toughness as any folder has: it is nearly as strong, in all directions, as a fixed-blade.

It’s impossible to understand the new folder from Grayman Knives unless you know the company’s fixed-blade heritage. A couple years ago, Grayman Knives burst on the scene with big, mean, rough-looking fixed-blade knives that were unlike almost anything ever seen before. They weren’t pretty or finely finished, and the company was proud of that. On the military and firearm forums frequented by active-duty combat personnel you saw pretty much uniform praise. The fact that some grind marks, for example, might be on the blade didn’t matter since the knife was going to get plenty scratched the first time it was used anyway. If a scale wasn’t perfectly fitted to the tang, it was irrelevant. The aesthetics of the knife didn’t matter; its performance did. 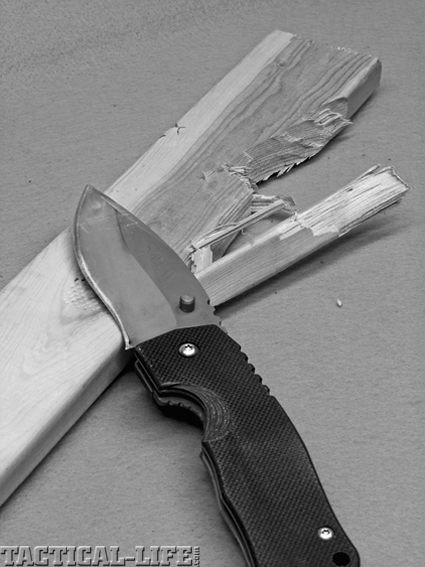 The Satu can chop, too. With no special technique, and without hurrying, I got halfway through this furring strip in about 15 seconds. Most folders don’t have the heft or geometry to chop effectively.

Battle Built
Mike, the man behind Grayman, has years of experience in and around combat, combat personnel (foreign and domestic), contractors, indigenous peoples, and NGOs in various places where you wouldn’t go on vacation. In his view, a knife may be the only tool that some freedom fighter has besides his rifle and ammo, and it has to chop and split wood, dig holes and trenches, cut things, be a quick-killing weapon if need be, function as a pry bar, clear brush, pound stuff, and even skin game. In the July, 2009 issue of TK, Andre Dall’au’s article on Grayman Knives spelled out the reasoning behind the unique, beefy fixed-blade knives he makes:

1) The knife needs to take a beating, which translates to toughness.

2) It has to be easy to maintain in the field. The knife’s ability to take an edge, not just how well it holds an edge, determines its serviceability. Grayman uses common 1095 high carbon steel, which can be sharpened with a ceramic rod, stone or any number of expedient sharpening media, such as the rim of a porcelain toilet.

3) It should have a thick spine to facilitate batoning and splitting wood, and because a field knife is sometimes used for prying and door breaching.

4) For use as a weapon, the blade should be well balanced for nimble handling, but with a wide blade for a large wound channel, and enough mass to better penetrate through the ribs, sternum and other torso bones.

5) It should be possible to pound on the butt with full force when necessary.
6) The handle shape should be secure and comfortable for someone who uses a knife for hours at a time. An index finger groove helps the user to keep a firm hold even if his grip is becoming slack from wetness or fatigue, and provides a secure shelf for the pinkie finger when the user is slamming hard with an ice pick grip. 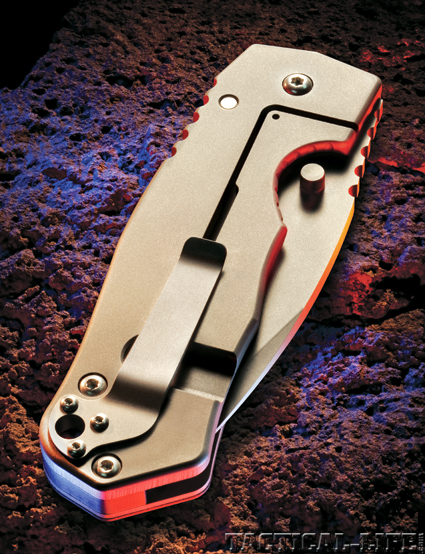 The massive frame of the Satu is matched to the massive size of its folding blade, with the result that it’s the strongest folder the author has ever used.