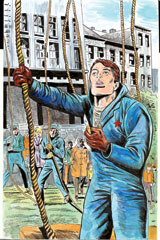 The biggest parade in the world is in New York City on Thanksgiving and this year my wife and I were in it. We had filled out the lengthy application for “balloon handler” back in the summer and were surprised to be chosen for the Hello Kitty balloon. It’s very popular with kids and is a huge balloon requiring a team of 80 people to hold it down and guide it through the city streets. Macy’s does a bang-up job on the DVD training they sent to us and it was pretty good at teaching us “the ropes” of the job.

And that’s when that little voice in my head said “ropes? Big helium balloon? Crosswinds? Crowded city streets? Lots of other folks with ropes around me?” I’ve been around line, ropes, and nets throughout my life. Racing sail boats, fishing on an Alaskan salmon seiner, ice and rock climbing, farm work, draft horses and logging, all taught me how fast things can go wrong when there’s line/rope/cable coupled with powerful forces. I knew one guy who lost his leg when he got caught in a fishing net. I’ve read about climbers who’ve gotten tangled in their lines—one guy accidentally hung himself in a fall. I was in Maine when a group of ice climbers on Mt. Katadyn were caught in an ice storm and their lines froze them to a cliff face and they all died.

I’ve been fortunate and have always managed to come through relatively unscathed from all of these experiences. The reason is “thoughtful preparedness.” I’ve learned (often the hard way) to think through the kind of situation I will be in and prepare accordingly. Visualization is a powerful tool that can give leverage in situations that might be completely unfamiliar.

The question was: What knife to carry in the parade? The answer was not straightforward. First, both hands would be carrying the “bone,” an H-shaped plastic device that coils and uncoils the line tied off to the balloon. Second, this would take place in New York City where you can’t just whip out a knife without attracting a lot of attention. Third, people in NYC are apt to get a bit hysterical when they see somebody come out with a knife. Fourth, we were wearing jumpsuit costumes I’d never seen and I couldn’t count on there being pockets in the costume.

All of this meant I couldn’t carry a belt knife, certainly no double-edge boot knife and, without pockets, my Spyderco Police model was without a perch. What to do? The answer came in a flash of insight! I had just been to a knife show and traded a couple of my hones for a Paul LeTourneau neck knife. The knife is single-edged, sheathed in Kydex and it hung at the perfect height on my chest (no bulge in the clothing).

Back to the Macy’s Parade. Sure enough, someone forgot to untie two of the sandbags holding down the balloon and they were hanging and swinging among the balloon handlers. They had to be removed and the opposing force of the balloon and the sandbag didn’t allow for enough slack to untie the knot. A discrete reach into my shirt and the job was handled. No muss, no fuss, no big shiny blade and few saw the blade come out and swiftly do its work. 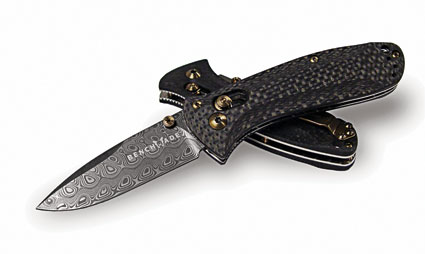 Get the latest information about tactical, survival, and hunting knives from the Tactical Knives...