Most Tactical Knives readers are familiar with the MOD (Masters of Defense) series of knives. Founded in 1998 by Jim Ray, MOD made its mark on the tactical knife world by being the only company to have all of its knives designed by real experts in defensive knife tactics. This proach proved to be a huge success for MOD’s reputation, as a high quality tactical series of knives quickly grew.

In 2003, MOD was purchased by BLACKHAWK! Products Group, which was an industry leader in nylon holsters and related gear. BLACKHAWK! wanted to diversify its product line and become a true one-stop source for all types of tactical gear, so in addition to packs, slings, holsters, lights, apparel, and entry tools, MOD joined BLACKHAWK! as what they felt was the source of tactical knives. Although MOD had already captured the attention of many elite military and law enforcement personnel, joining BLACKHAWK! gave MOD’s products wider appeal to the armed professional and with the additional exposure came a lot of feedback from the guys and gals in the fi eld. Frankly, the folks who could aff ord MOD knives loved them and really appreciated the attention to detail of their advanced designs. Unfortunately, to the street cop or lower-ranking soldier, with families to raise and mortgages to pay, the knives were either out of their price range or too expensive to be possibly lost in the fi eld. Based on this feedback, BLACKHAWK! launched a second knife brand in 2005 known as BLACKHAWK! Blades. Using the proven concept of expert-inspired tactical designs, the BLACKHAWK! Blades line included both domestic and foreign production, which allowed BLACKHAWK! to off er high quality, inspired designs at prices that the end user with bills to pay could afford.

Cutting Edge Growth
When I received BLACKHAWK!’s latest catalog in early 2008, it was clear that the company’s knife strategy had continued to evolve. To get the full story—and a chance to review their newest designs—I contacted their knife guru, Michael Janich. Mike is one of the industry’s “good guys” in that he cares not only about the product he produces, but also about the individual who will be using it. His knife defense course, “Martial Blade Concepts,” is one of the most respected knife defense programs on the planet. While I have yet to go “hands on” with Mike, I have seen all of his Paladin Press videos and what he teaches is simple, functional and it just makes sense to someone “less than skilled” like me.

Mike explained that, due to BLACK-HAWK!’s explosive growth, they have decided to move away from the idea of “brands” to focus on categories of products. Mike told me, BLACKHAWK! listened carefully to the feedback they received from their core customers—mostly military and law enforcement personnel and defense-minded citizens—and restructured their knife line-up to meet these needs: “Specifically, we’re doing three things: paring down the MOD line to eliminate slow-selling knives, re-engineering MOD’s most popular designs to make them even better, and moving a number of proven MOD designs into the BLACKHAWK! line to make them more affordable to soldiers and cops.”

The most recent result of these strategic changes was BLACKHAWK!’s introduction of seven new knives at the 2008 SHOT Show. These knives, all manufactured in Taiwan and priced under $100 retail, included both new designs and new renderings of some familiar MOD designs. Here’s a rundown of these new knives and some insights into their lineage.

The Point Man
One of the five original MOD knives was James “Patches” Watson’s “Trident” folder. Although it later evolved into the “Advanced Tactical Folding Knife” (ATFK), to hardcore fans the original version was the classic. The Point Man takes the classic lines of the Trident and renders them with new materials and several distinct improvements.

Instead of machined aluminum, the Point Man’s handles are U.S.-made G-10 with nested 420J stainless steel liners. The nested design makes the knife slimmer and stronger and works perfectly with its liner-lock mechanism. The blade is AUS8A stainless steel with a black Teflon coating and an improved grind pattern that offers even better point strength than the original. A four-position clip secured with blackened Torx-head screws also offers versatility of carry not found on the original MOD version.

The fit and finish of this knife are excellent and at a retail of $99, it is half the price of the original MOD version.

Razorback-Trocar
Inspired by Massad Ayoob’s contribution to the original MOD line, the Razorback fixed blade, this version of the knife was redesigned with the help of instructors from the ISTM (International School of Tactical Medicine). Now optimized for tactical medical applications, the Razorback-Trocar features a Teflon-coated AUS8A tanto-style blade with a zero ground cutting edge at the tip. A series of four notches on the back of the blade are carefully spaced one centimeter apart to serve as depth gauges for common medical procedures. Using these as both a visual and physical index, medics can know exactly how deep they are cutting or puncturing with the scalpel-like point.

The Razorback-Trocar’s handle is injection-molded nylon and aggressively textured for a positive grip. The knife’s sheath is molded from the same type of material and comes complete with BLACKHAWK!’s unique Total Concealed Carry Solution (TCCS) sheath system. This system includes all the parts necessary to support more than 100 different carry positions. It is also compatible with BLACKHAWK!’s holster and MOLLE hardware and is the only MOLLE-mountable sheath system I’ve seen that allows full angular adjustability.

The Razorback-Trocar with full sheath system sells for $74—less than half the price of the MOD version.

Hornet II
James Keating’s original MOD Hornet has always been one of my favorite carry knives. I carried my Hornet for five years while assigned to a Narcotics Enforcement Task Force and I used it for a wide range of cutting chores. I still carry it to this day, though I admit to working with other blades—mostly to see if they measure up to the Hornet! Its compact size and excellent ergonomics made it a near-perfect carry knife for both utility and personal defense. The only thing I didn’t like about it was the fact that its clip only allowed right-side tip-down carry. Mike Janich was a real sport about this and promised that he would consider this on any future revisions to the knife.

The new Hornet II corrects the clip problem right out-of-the-box, offering all four clip-mounting options. Like the Point Man, it features G-10 handles, nested stainless steel liners, a stout liner-lock mechanism, and a black-coated AUS8A blade. Also like the Point Man, it is roughly half the price of the original at $99.

Crucible II
I have never met Kelly McCann, but I consider him one of the best close-combat and personal security trainers in the business. His firearms, H2H combat and threat management programs are well thought out and combat proven all over the world. One of the stars of the BLACKHAWK! Blades line since its introduction, the original version of this sturdy folder was made in Japan. Although more affordable than many MOD knives, its $200 price tag still put it out of reach of many cops, servicemen and protection professionals on a budget.

The Crucible II takes the same proven design and expresses it with an AUS8A stainless steel blade, black Teflon coating, and precision-blanked 420J stainless steel liners. Instead of nested liners, the Crucible II features a layered construction that gives it increased heft and mass and a slightly more aggressive G-10 texture than the original. Per McCann’s design specs, the screws on the pivot pin and four-position pocket clip are all Phillips-head for easy user maintenance with common tools. Best of all, the Crucible II offers the same high-speed performance as its predecessor for a very affordable $89.

Garra II
Inspired by the MOD Caracara and Garra, the Garra II represents BLACKHAWK!’s, and more specifically, Mike Janich’s learned opinion of what a hawkbill fighter ought to be. Constructed with the same materials and methods as the Hornet II and Point Man, this mean folder has just enough curve to cut with a vengeance, while still maintaining a very functional thrusting point. This folder is a good choice for those who prefer slash and run defense techniques. Its full retail price is a very straightforward 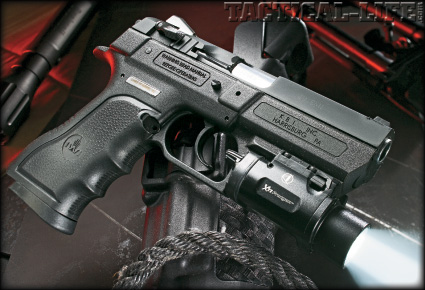