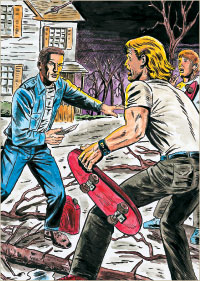 Late August brought a major windstorm to our metropolitan area, leaving in its wake the entire neighborhood sans power or telephone communications. The wind caused immense damage to homes and vehicles by tearing trees down and depositing them through windows and roofs and downing countless overhead lines. The devastation was the worst I had seen in my 50 years. My normal 10-minute ride home from work took over 40 that night. I had to continually backtrack because of tree-blocked roads and flooded intersections. When I was finally able to get to the major thoroughfare that allowed access to my side of the street, I found a police roadblock. The village emergency plans called for the blocking off of all major entry routes to the village. As my area was “ground zero” for the storm, nobody was being allowed in unless they could prove residency. The department didn’t want “undesirables” driving through looking for something to loot. I asked how many officers were actually patrolling the streets and was told “not many.”

My wife and daughter were already home safe so we started our 5,500-watt generator and ran extension cords to our sump pump, refrigerator and lamps. After securing the generator to our fence with a heavy-duty cable and a lock, I put on work boots, jeans and my Columbia River First Strike sheath knife. Scanning the area from our front deck, I found my neighbors busy clearing tree limbs and debris from their yards, and then I noticed two scruffy-looking teens that I had never seen on our street before. They were slowly walking down the sidewalk, peering down driveways and into yards. I attempted a cell phone call to the police to advise them of the roving groups, but was met with a dead line. The cell towers were obviously hit as well.

I assisted the neighbors where I could and was able to help a couple of them patch up windows with plastic and duct tape. My CRKT knife was invaluable. It performed every job from slicing plastic sheeting to cutting rope for lashing downed limbs together. Around 9 p.m. I realized my gas supply for the generator was extremely low. Several gas stations were still open, but since the streets weren’t drivable, I had to hoof it with a five-gallon fuel can.

Three blocks from home I heard voices coming toward me and could see the silhouettes of two guys. They stopped 10 feet in front of me and the bigger one said, “Hey Dude, we need some money for a cab! It’s too crappy to ’board home. Give us some, will ya!” They were both in their late teens, wearing tight black jeans and t-shirts, carrying skateboards that they held like clubs. After a short uncomfortable stare down, I slowly put my gas can down and pulled back my jacket, drew the First Strike and went into a combative stance. “Sorry son, I don’t have any money. This knife is all I have of any value. Would you like me to give it to you?” After a brief second, they both dropped their jaws and then ran into the darkness shouting obscenities at me.

The police can’t always protect you, no matter how hard they try. It’s your job to assess your own needs for emergencies. I was told that within 24 hours of our four-day power outage, there were no batteries, flashlights, matches, chainsaws, candles or generators to be had in any of the local stores. Of course, the last lesson is that a weapon in the hands of an individual trained and willing to use it will often stave off violence before it even starts.

Late August brought a major windstorm to our metropolitan area, leaving in its wake…