I’ve often been asked: “Where can I get a good survival knife on the cheap?” There are so many answers, but the choice became even harder when Camillus, makers of the Becker Knife and Tool line, went into bankruptcy due to poor management. But Ethan Becker, designer and man behind Becker Knife and Tool, isn’t about to let a pesky problem like that get in his way. Ethan joined up with the legendary KA-BAR Knife Company to produce and resurrect the highly-sought-after tools that outdoorsmen and soldiers alike have come to love. 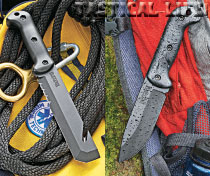 Behind The Becker Name
I have had the chance to meet Ethan on a number of occasions and love to hear about his extensive knowledge on knives. These straightforward utilitarian blades prove that Ethan knows how to cut a thing or two. All of the knives featured are made in the USA out of 1095 carbon steel, with handles of “Grivory.” Grivory is a close cousin of Zytel, and the marine industry manufactures nails out of this material for saltwater applications. If you hit the handle of a Becker knife with a coin, the slabs emit a hollow, light sound, not a thump like plastic.

All of the handles are screwed on via allen nuts, with no lock-tight involved. Did you hear that? Yes, all you outdoor cutlery-mad scientists can go about hollowing out the inside of the handle, and packing it full of survival goodies. Just don’t lose that 4-millimeter allen wrench, though! The handles also feature a large lanyard hole. Finally, something I can effortlessly put paracord through!

Snake Wrangling Knives
For about four or five years, I have been going down to the Everglades area and the Florida Keys to hunt snakes during the winter. We don’t kill or collect any of the native species of animals but we camp the entire time. This year the new Becker knives accompanied us on this trip. My friends were excited about using these cool tactical and outdoor knives in the field to cut everything possible. The knives I chose for the trip were the BK-2 Companion, a BK-7 Combat Utility knife, the large BK-9 Combat Bowie, and the chisel-edged BK-3 TacTool.

BK-2 Companion
The smallest knife of the bunch, the BK-2 knife, is Ethan’s answer to the British MOD survival knife. The BK-2 Companion knife encapsulates the same blade shape and thickness of this spear-point cutting tool. This is the MOD 4, as it should have been made, well constructed and properly heat-treated. The heavy knife is gaining popularity with the outdoor community due to the robust thickness of the ¼-inch blade and stout full-tang design. Despite the thickness, the flat grind on the knife still proved to cut well as a camp knife, and destroyed the firewood needed for the campfire. The snake guys loved this knife because it had a good heft for the size. Two of them in particular liked the weight to smash up crab shells for bait. If I were ever to want to baton through a straight piece of good, hard, pitchwood knot, this would be the first knife I would pick up. The BK-2 comes with an ambidextrous Kydex sheath with a button enclosure and has a large belt loop, should someone with a large web belt decide to carry the knife.

BK-7 Combat Utility Knife
This knife has been referred to as the “Marine combat knife replacement.” It has a wide blade with a thinner 3/16-inch spine. For its size, the knife is lightweight, something that would be appealing to someone who has to tote a 75-pound rucksack for a living while people are shooting at him. It also features a projection pommel on the back for hammering or beating stakes into the ground. We carried this knife around the camp, and it sliced carrots and trail bologna great. The knife also made its way out to the palmetto area where it sliced palmetto fronds in half for primitive shelter shingles. The edge geometry on this thinner, flat ground edge made it slice well, yet at 13.3 ounces, it still had the robustness needed to be carried by America’s finest.

BK-9 Combat Bowie
While in the Everglades and the surrounding Keys, it is not uncommon to be literally in the thick of tropical jungle vegetation. The BK-9 was right at home in the dense green hell. Moving to the deep woods, I became uncomfortably familiar with various species of vines and briars. But the new thinner 3/16-inch spine of the BK-9 Combat Bowie sliced through the vegetation like butter. The large 9-inch-blade knife didn’t stop there, as it proved its versatility when we cut a downed pine log in half so that we could flip one end and inspect it. Now I know why this large knife has won the hearts of many survivalists, being a bit smaller than a machete but still able to do many of the same tasks. At 16.6 ounces, the BK-9 weighs about 2 ounces more than its Combat Utility brother. It has a smaller false edge than the Combat Utility, but is wider overall, making it easy to choke up on the false edge to do fine work.

BK-3 TacTool
During a talk with Ethan, he informed me that the BK-3 TacTool was designed as a police entry tool. When SWAT teams use a Ram, they usually leave it at the front door, but what happens when they come to a locked door inside the house? That’s where the prying capabilities of the ¼-inch spine of the BK-3 come in handy. The TacTool also comes in handy when “herping.” Herping derives its name from herpetology—the study of reptiles. Herping is the act of looking for reptiles and amphibians, and there are tools that herpers associate themselves with to do this task. My normal piece of snake-hunting gear consists of a modified hoe that is made into a snake hook called a “stump ripper.” Now every time I go herping, I will be carrying the BK-3, too. I will admit I had a less than enthusiastic opinion about these “broken tip” chisel knives and their usefulness. My opinion of them flipped completely around when I found my first scorpion of the trip while peeling bark with the TacTool, and I realized that my fingers would have been where the TacTool was. If it weren’t for the TacTool, I would have had a nasty sting.

The hero of the trip, the BK-3 TacTool, continued to impress; it also saved me from another venomous arthropod onslaught. When flipping more rotten logs, I came upon a 7-inch Scolopendra centipede. Yes that’s right, 7 inches! This sucker was as long as the BK-3’s blade, and these large centipedes are native, not introduced by human means! I cautiously moved the quick critter out of the way. The tool proved useful to other members of the group as well. They used it for prying rocks, opening and splitting more rotten logs, going through leaf litter on the ground, and pinning down scorpion tails and snake’s heads with the large, flat blade. A piece of tin that was on the ground was easily hacked into a more manageable portion as well. While we were at it, we did notice a green iguana go up a thin palm tree just out of reach. The TacTool proved itself an acceptable chopper when we cut down the tree to catch the medium-sized lizard up top.

Sheathing the Beasts
Both the TacTool and the Companion’s Kydex sheaths feature drain holes, something that proved very useful in the swamps. The sheath’s nylon belt loop allows the knives to ride low on the hip. The other two knives, the BK-7 Combat Utility and the BK-9 Combat Bowie have nylon sheaths with Kydex inserts. The knives do bounce around a little in the sheaths, but the button closure kept this to a minimum. There is also a smaller pouch in the front of the sheath for a BK-13, a small stainless knife that comes with the package. I received early production pieces to review, so I did not have one of these small knives in my sheath.

The resurrected Becker line has brought KA-BAR much well deserved attention recently, as these blades are solid and dependable. I know I have completely revamped my snake-hunting gear due to the versatility of one of Ethan’s well-designed blades. I will continue to rely on the blades to save my fingers and help me discover animals on our wild North American continent.

I’ve often been asked: “Where can I get a good survival knife on…