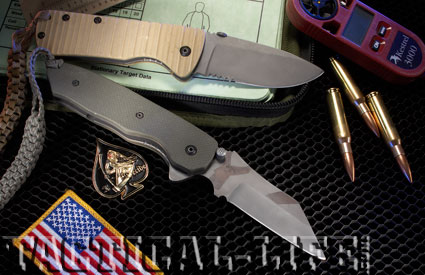 There comes a time in every man’s life when he must stand up for his principles. Even to the point of sounding like a militant, I can no longer sit on the sidelines and watch a group of citizens be discriminated against solely because they are superior to the average populace. I’m not ranting on race, color, creed or any of the other mundane differences in people, but the discrimination practiced every day against those 15 percent of us who were blessed to be left-handed. If you think I am joking, guess again. Spend a day looking at everything around you and see how many items are designed to be operated with the right hand. Everything from scissors to firearms has been made to accommodate those who wrongly use their right hands. One of the worst offenders in industry has been the cutlery companies. Very few have offered a left-handed knife to the public and most of those have been discontinued after only a year or two. I’m sure someone will correct me if I’m wrong, but at this moment I can’t think of a major factory that offers a true left-handed knife. 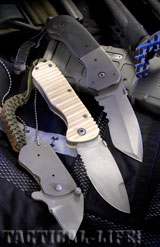 Ambidextrous Is No Excuse!
Most cutlery companies will quickly point out that the majority of fixed-blade knives are ambidextrous. Of course, their smug look of righteousness will disappear as soon as you point out the right-handed sheath they supply with the knife. If you’re talking about folders, they will tell you that the ambidextrous thumb stud to assist in opening can be used with either hand. That may help in opening a knife, but try fighting a right-handed locking system when it is time to close the blade. Before you start to second-guess me and bring up the dual mode of lock-back and slip-joint knives, look to see which side of the blade has the nail notch. It’s time for my fellow “lefties” to rise up and demand the proper attention we are due.

Do you wonder what has set me off after years of suffering in silence? The answer lies in a box recently delivered to the studio with the return label reading Southpaw-Knives. Inside I found examples of the knives created by Ira Lipson and each one was created with the left-handed user in mind. Ira, a lefty himself, started Southpaw-Knives around 2002 in the normal progression from hobbyist to businessman. Ira had always had an interest in knives but was faced with the fact that knives, like most of the products in the world, are designed for right-handed people. He would purchase a knife and then remove, replace, or alter a portion of it to make it fit his needs. At first it may have been just replacing a pocket clip or re-shaping a handle scale. From that, his work grew to where he was changing so much on a knife that he might as well have started from scratch. Other than the part about being left-handed, Ira Lipson’s beginnings may sound like dozens of other makers, but there are a couple of twists to his tale. Ira prefers folders to fixed blades and since 2002 he has made over 100 knives and has yet to make his first fixed blade knife. Ira has also started a bit later than most makers.

In 1997 he retired as a Chief Warrant Officer from the U.S. Army Reserves while continuing his career as a bio-medical engineer. As he started to look to the end of this second career, he was contemplating the time when his knife making would advance from a hobby to full time. His military experience shone through when I asked him how he would like his knives to be perceived. His answer was short and to the point: “Cool, tactical, sturdy and dependable.” While Ira has worked with Damascus steels and Ivory scales, his preferences lean towards ATS-34 and 154CPM stainless steels and G10 or Micarta scales. The last word you would use to describe his knives would be delicate. From the largest design to the smallest, they are made to be used hard.

The Southpaw Gamut
The five knives in the box had blades ranging from 3-¼ inches down to 1-3/8 inches. All of the five had ambidextrous thumb studs or an ambidextrous opening disk mounted to the top of the blade, but the liner locks were set up for left-handed use. It is nothing unusual for me to be playing with opening and closing a knife while on the phone, but it was nice to be able to do so without worrying about taking part of a finger off in the process. I was having so much fun, I felt like carrying the knives around just so I could hand them to right-handed people to watch them fumble! In the process of reviewing knives, I always pick one out for a little field testing. After all, it would be foolish to judge any knife before using it, but this time there were two knives I wanted to try. The “Sand Rat Sr.” seemed to be a good example of a no-nonsense working knife and the “Little Joe” was just too novel to pass up.

The Sand Rat Sr. is the larger of two knives offered in the same pattern. The blade is 3-¼ inches long and has a nice bead-blast finish. The handle scales are of a tan Micarta and are highly grooved to supply a non-slip grip. The blade is almost a perfect cross between a drop-point and spear-point design. The liners and clip are titanium.

In talking with Ira, his military career became obvious when we discussed the uses of this type of knife. While I wouldn’t want to face an aggressor who was wielding this knife, 99.9% of its usable life will be spent as a tool for mundane chores such as cutting bands on ammo crates or opening MREs. Knife fights are very rare in this day and time, but the day-to-day chores of the average soldier have remained the same for decades.

Sand Rat Testing
During my testing the weather here in North Carolina decided to be cold and wet. Even after three days of rain, the Sand Rat was able to find dry wood hidden under layers of wet bark. The grooves in the handle definitely help in handling the knife in what is normally a slippery operation. The blade was more than stout enough to split the 2- to 3-inch wood I was using to make a fire. Ira had mentioned cutting ammo bands in our conversation and I just happened to have a couple of cases of surplus Russian ammo sitting around. Needing to try it out with a few AKs, I thought now would be a good time to try the knife metal to metal. The metal bands around the wooden cases were easily sliced without even marring the edge.

The Little Joe
The other knife I was trying was the Little Joe. This knife is a small—about the size of a dog tag—liner lock fashioned out of titanium. The blade has a cutting edge of only 1-3/8 inches, but I was surprised to find how useful it was having a small blade always handy. I will admit that I felt it a bit heavy for everyday carry around my neck with a dog tag chain. Later I tried wearing it over the collar of my jacket and felt no discomfort. It would excel as a small knife on a key ring or attached to the D-ring on a pack strap. Pairing this knife with a larger folder or fixed blade would create a perfect duo. A blade this size is all you need for opening packages or slicing webbing.

The Sand Rat Sr. and the Little Joe are exactly what they were designed to be, straightforward utility knives. These are the knives that you can depend on to perform in the woods of North Carolina or the battlefields around the world. These two were the ones I tried, but Ira makes other patterns and is more than willing to discuss your individual needs. He will even make right-handed knives when needed.

Studies have shown that left-handed people have a shorter lifespan due to the frustration they face in a right-handed world. If you are part of the privileged few sit back, relax and check out Southpaw-Knives. If you’re cursed and use your right hand, don’t worry, Ira will still talk to you. 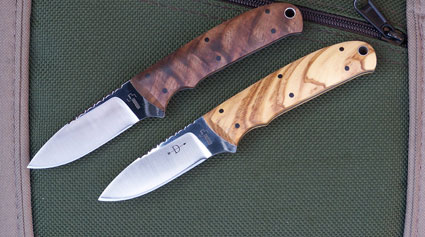 The quest for the perfect skinning knife ends with the new Cabela’s/Boker Plus Dozier...