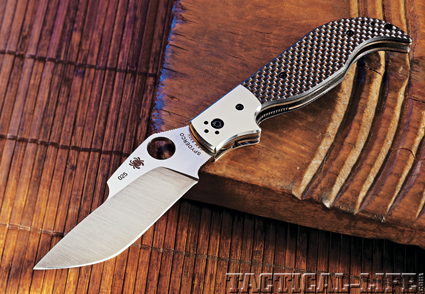 The Spyderco/Schempp Navaja brings this classic Spanish “tactical” folder into the 21st century. Talk about thinking of everything, they have even built a ratchet sound into the lock!

While folding knives have been around since the days of the Romans, early versions lacked backsprings and were held open mostly by friction. For practical purposes, these primitive examples were basically folding table knives carried during a time when the diner was often expected to supply his own cutlery.

It took the invention of spring steel and a variety of blade locks many centuries later to turn the folder into something more utilitarian. The Spanish and their “navajas” (in modern usage, “navaja” means “razor” or “pocketknife”) seem to have been the first to see the true tactical potential of the lock-blade folding knife. One version of the story is that Spanish rulers prohibited the common masses from carrying swords, so they created “sword-sized” folding knives to get around the ban. It is certainly accurate to say, once open, that many of the older navajas had the overall length of a sword. 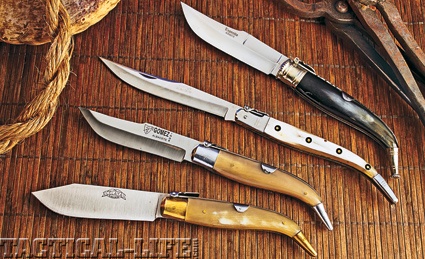 These are a few of the real Spanish navajas I brought back Albacete, Spain, a little over a year ago. The folder is still made in a wide variety of shapes and sizes there but “bull horn” remains the preferred handle material.

The navaja was taken seriously enough that there were actually schools and training manuals available to teach its use. Paladin Press (www.paladin-press.com) currently reprints one of these: Manual of the Baratero; or, The Art of Handling the Navaja, the Knife, and the Scissors of the Gypsies with a modern translation by James Loriega. While the average modern navaja has generally become a little more modest in size, my trip to Albacete, Spain, last year proved that the knife is still being made and sold in a huge variety of styles and patterns. 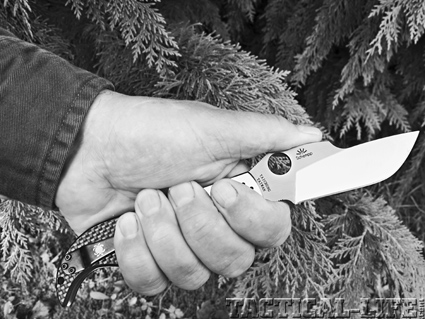 The handle frame and extended choil of the Spyderco Navaja allow the user to choke up on the blade for fine work.