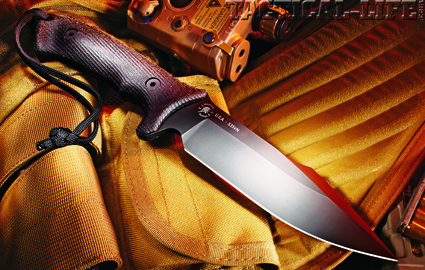 The new Spartan/Harsey II is the perfect shape and size for a serious combat knife. Big enough to be effective as a weapon without being so large it isn’t useful for everyday cutting needs.

An incident in Sean Parnell’s new book Outlaw Platoon, chronicling his tour in Afghanistan with the 10th Mountain division, reinforced something I have always felt about infantry combat. Murphy rules! Anything you think could never happen to you almost certainly will. Starting out on a patrol, he makes a point of checking that every man in his platoon was carrying the full, “by the book,” load of ammunition. I quickly noticed that basic load-out hasn’t changed much since Vietnam, around 180 rounds of 5.56mm. The first law of real combat is the guy that wrote the manual was never in a firefight, I carried around 500 rounds and I knew guys that were packing closer to 700 or 800 rounds. Parnell’s platoon was soon in a gun battle with a numerically superior force of Taliban and one by one their belt-fed weapons went dry. Far quicker than they expected they were down to a magazine or two per rifleman and Lieutenant Parnell was watching enemy troops with “8-inch knives on their belts” closing in on his position. He then mentally thought “I should order everyone to fix bayonets now!” The only problem was they weren’t carrying bayonets—too much weight, don’t you know, and no one ever uses them in modern combat, right? 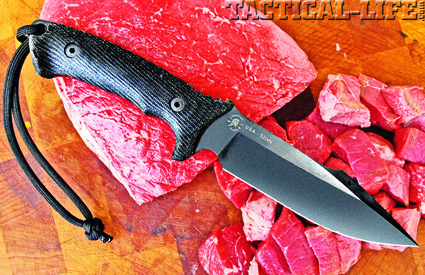 The wide, think bevel of the Spartan knife is extremely efficient at cutting raw flesh. It should make an excellent field-butchering knife for troops making use of local game and livestock.

Surprise, the next time they got into a similar firefight their ammunition load was very close to what I was carrying in Vietnam. The Lieutenant never mentioned if they went that one step farther and added cold steel to their battle rattle. While I certainly understand the need to keep your load manageable, there is no way I would go up against that kind of adversary without a serious combat knife by my side. Which brings us the new Spartan/Harsey II. Though the original Harsey was a well-designed combat blade, at 7.63 inches in blade length it was probably larger and heavier than many would be willing to hump over the hills of the Hindu Kush. The knife was also a very limited edition and the run sold out soon after it was introduced.

In contrast, the new Spartan/Harsey II is a more manageable 6.25 inches in blade length and 0.72 pounds in weight. As I’ve stated before, I’m not convinced anything much under 6 inches is suitable for military close-combat because the rules are much different than in a civilian self-defense situation. There is also the reality that an enemy soldier will probably be protected by several layers of heavy clothing, webgear, and possibly, soft body armor that must be penetrated to reach a vital target. Seven inches is about the upper end of what can conveniently serve as a utility knife for everyday field chores but something around 6 inches offers a better balance of performance. 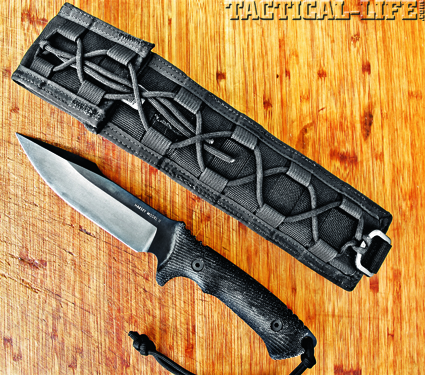 Like most serious modern combat knives, the Spartan/Harsey’s sheath is fully MOLLE compatible. 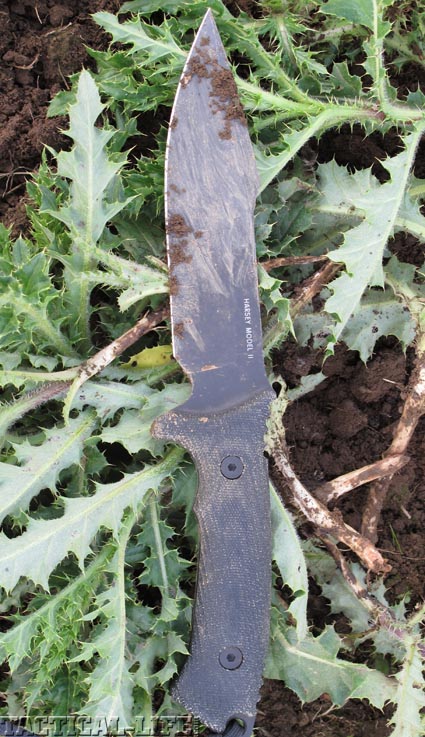 Digging out Canadian thistles with a knife only slows them down for a short while. The Spartan/Harsey quickly lost its edge in the soil but it proved very easy to resharpen back to razor keenness on a diamond rod.

False Edge
Like many commercial combat knives, the 3-inch false edge is almost, but not quite, sharp. From a civilian perspective, there is probably no reason to take that any farther, but if I were going into combat again, I think I would spend a little time honing it to a real edge. Along with making penetration that much easier, a second edge also gives you a back-cut option in close-combat. An opening for using a sharp false edge may not come up very often, but I would rather have the option and not need it than the reverse.

The Micarta handle on the knife is a roomy 5.5 inches long and is available in either black or green colors. Some may fault it for not having a wide, “blade parrying” cross-guard, but most of us who have used knives in the field have never found it to be that essential. Leave the dazzling sword work to Zorro; it isn’t going to happen in a real world knife fight.

The sheath supplied with the Harsey II is a fairly basic, hard lined nylon model available in black, coyote tan, or multi-cam colors. As can be expected from a company founded by veteran Spec Ops troops, the scabbard is MOLLE compatible and jump safe. I was especially happy to find they had used a snap closer around the handle rather than Velcro as I have yet to meet a field troop that prefer the later. The scabbard is also ambidextrous, with the knife fitting in the liner from either side equally well.

Like the first Spartan/Harsey combat knife, the new model offers the wide, flat grind I consider best for serious cutting. Way too many combat/survival knives get wrapped up in providing “unbreakable” thick blades over edges that will actually be useful in the field. I have a feeling that is why tactical folders are so popular with the troops these days. If that combat blade you brought with you doesn’t actually do anything useful, you start looking for something that will. Within the limits of their size range, folders fill a need, but the Spartan/Harsey II will meet a much wider spectrum of potential situations.

My own field-testing started with cubing a large section of steak for a French style slow simmered beef and beer stew. Unlike a lot of writers, I don’t see cutting raw meat as proving much about the combat potential of a knife, as practically any sharp blade with your full body weight behind will do that. On the other hand, I like to know, should I need to use the knife for more mundane chores like maybe butchering a Somali goat, Thai pig or Peruvian chicken, it is up to it. The wide bevels of the Harsey makes it a very efficient cutter for this type of use.

Next came more of my annual spring chore of sharpening points on fresh cut garden stakes. Anyone who has been around old barns much has probably noticed it wasn’t that long ago when most of the construction was held together with wooden pegs pounded into hand-bored holes rather than nails. I recently read a bit of American pioneer history describing how it was a normal frontier winter pastime to sit around the fire whittling these pegs from split sections of wood. 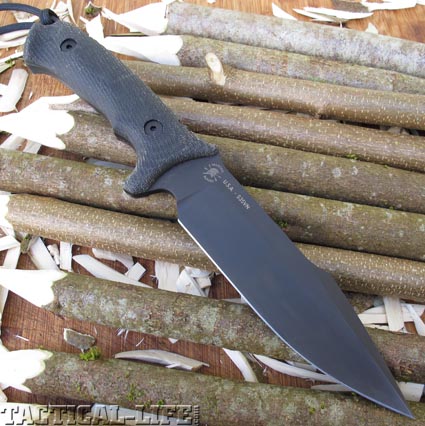 Good edge geometry makes this an outstanding knife for basic fieldwork like sharpening points on stakes. 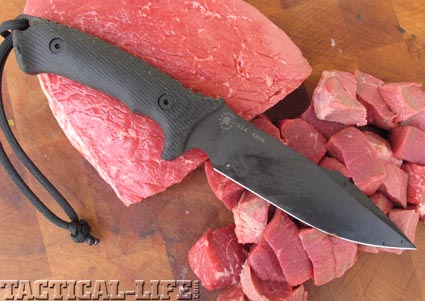 The wide, think bevel of the Spartan knife is extremely efficient at cutting raw flesh. It should make an excellent field-butchering knife for troops making use of local game and livestock.

Cutting Target
Having pointed out I don’t feel raw meat is a real test of a combat knife’s slashing potential, I tried to create a target I felt would be realistic. I took two old pair of Levis and placed the legs of one pair inside the other. After that I rolled heavy cardboard and lined both legs to stiffen them and make the target tougher. Finally, I placed the legs of this target inside a pair of 80’s vintage U.S. Army camo BDU trousers. As I already knew, producing an effective slash through heavy military gear and clothing is a lot harder than you might think. My downward slash measured about 10 inches long in the BDUs, slightly less in the two pair of Levis, and only about 4 inches in length on the first layer of cardboard. There was no damage to the second layer of cardboard on either of my attempts at this test. I think I can safely say an enemy combatant would have suffered a shallow wound that would probably not have been enough to disable him. Targeting unprotected areas like the hands and face would be more effective but not always practical under real close-combat conditions. This is why I still tend to favor straight thrusts to the body as the most effective use of a fighting knife.

“Digging” is one of those jobs most troops never mention their accounts of field time but it is something they actually use their combat knife for on a frequent basis. It may be probing for mines, burying trash, working on a fox hole or for many other reasons, but it all dulls a knife to a useless status in short order. I spend about a half hour with the Harsey II, digging Canadian thistle roots out of my garden rows. Not too surprisingly, the blade was completely dull from this abuse but there were no chips or other serious damage. The real surprise came when I went to resharpen the blade on a diamond surfaced rod. In about 60 seconds time I had the knife back to arm shaving sharp. Spartan Knives seems to have known what they were doing when they chose S35V for this knife.

At $425 the Harsey II is a serious investment that will probably only be of interest to troops that take their personal field gear equally seriously. You have to ask yourself, just how much is my hide worth? If you think you will never find yourself running low on ammo while a bunch of guys with 8-inch knives close on your fighting position, then maybe that multi-tool is all you need. Or at least until you shake hands with Mr. Murphy. 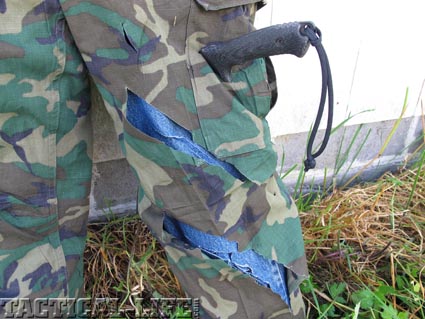 Author’s cutting target consisted of two pair of Levis and a pair of issue BDU pants stuffed with rolled cardboard. A slashing cut through all three layers of clothing but only one layer of cardboard. On the other hand, it easily sank to the hilt on a stab. 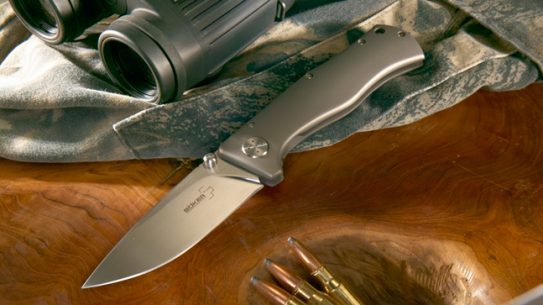