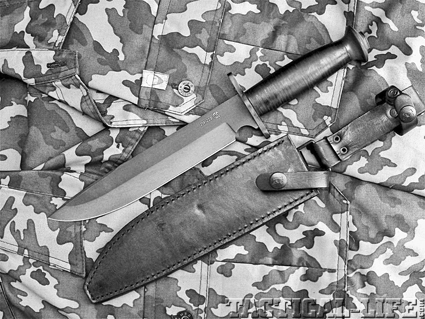 The Kizlyar DV-2 along with its sheath; camo is one of many used by Russian Spetsnaz troops.

A couple of years ago in this column I wrote about the Kizlyar Voron-3, which is the most widely used close combat knife by the Spetsnaz. Despite wide publicity, the “Spetsnaz Ballistic Knife,” though available and used for a while, was never really that popular. There was also a knife that incorporated a small pistol-caliber mechanism to fire at close range. Once again, this was never really widely used as a combat knife.
Other than the Voron-3, my Spetsnaz contacts mentioned two other knives that are widely used. One is a Kizlyar heavy-duty folder, which I would equate to some extent with Al Mar’s original SERE knife. At least one of the ex-Spetsnaz I worked with on close protection training in Russia still carried his and later sent me one as a gift. The other Spets knife was described to me as a big, heavy survival/fighting knife “like an American Bowie knife.” By the way, I should point out that there is at least one, and probably more, very good knife magazines in Russia and a lot of Russians are very cognizant of quality blades.

I could never quite get clear from my contacts which Spetsnaz units used the larger knife. One told me it was for the units that operated in forested areas where it could be used for survival, while another told me that certain Spetsnaz units had chosen it as a distinctive blade. Another one told me that in some units it was chosen instead of the Voron-3. I’m not sure of the answer, but since I am a big fan of Kizlyar knives, I had a Russian friend pick one up for me. However, the DV-2 (as the big knife is designated) he sent is the commercial version, which is similar to the Spetsnaz version but has a wooden handle instead of the compressed leather disks used on the issue knife.

Down Under
In the meantime, I was on the Kizlyar Knives Australia website where I have found Kizlyars in the past and noticed that they had available for sale DV-2 knives from a Russian military contract overrun that were the actual issue Spetsnaz knives. I quickly ordered one. 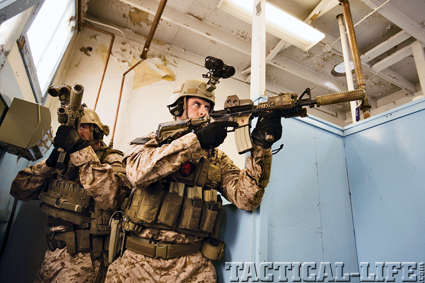 The Kizlyar DV-2 along with its sheath; camo is one of many used by…