For more than 50 years I have carried knives. When we had a riding stable, knives cleaned hooves, cut leather, opened feed sacks, and cut the twine on hay bales. As a teacher, my knife cuts the hard plastic ties on boxes of copy paper, cleans my nails, and trims, cuts and opens whatever task comes to hand. Knives are also considered for self-defense, but most of us never need to pull a knife and use it against another human. The knife should be there, though, just in case.

Nine years ago, my wife and I were living in an apartment near the local university. Power went out during the night, along with our phone service. We gathered up enough change to make calls to the phone and power companies to begin repairs, we found the proper phone numbers, and we walked to the university area, where there are several payphones. Since vagrants and panhandlers lived in the area to beg from students, some phones were always out of order and took your money, no change given. We arrived at the street just off campus, but were accosted by an aggressive, tall panhandler.

When we got to the payphone, the panhandler returned, demanding money in a loud voice, preventing us from making the call. I pulled out a large handful of change and walked away from the phone and my wife. The vagrant thought the handful of change was his! But his smile shifted to a frown when I put the change back in my pocket and pulled out a Spyderco folder, small but with a serrated hawkbill blade.

The Spyderco knife got his attention, he stepped back. I opened the blade, cleaned my fingernails with the point of the blade, and asked him to stop bothering us. We were in a hurry to use the phone, then go to work. I turned away, walked to my wife, and closed the knife and put it away, then stood with my back to my wife and listened to her while she reported our problems. After the first call was completed, the panhandler decided to try again and came our way. I reopened the Spyderco, started to “clean my nails,” while staring at the vagrant with a serious, unhappy expression on my face. This caused him to stop, and then move back to his position on the street comer. The second call completed, I put the knife away and, crossing the street to avoid the panhandler, we briskly walked home to prepare for work.

Sometimes displaying a weapon to “clean your nails” will help avoid trouble. Be ready, with knife open and in hand, and look serious. Closing the knife and putting it away can help you judge the other’s intent. If they return after you’ve pocketed the knife, simply bring it back out in the open. My wife was pleased the knife did the trick, that no violence was necessary, and that the problem was solved.

Carrying a tactical knife these days means that we must constantly appraise and reappraise the situation, consider legal ramifications, and always present the appearance that we are calm, never aggressive, and only react when given no choice and to avoid bodily harm. Find a knife that you enjoy and use frequently, so that it’s in your pocket, ready to extricate yourself or another from harm. 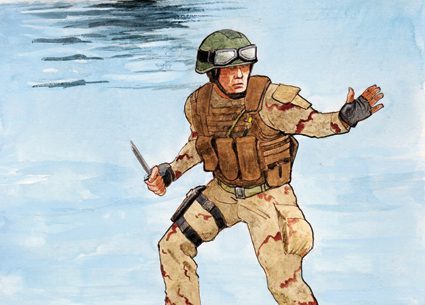 For more than 50 years I have carried knives. When we had a riding…