0
SHARES
2
VIEWS
Share on FacebookShare on Twitter
The SureFire Dart is a simple nuts and bolts design. No crazy bells or whistles, it’s just a quality-built EDC knife designed for easy carry.

In an industry inundated with tactical gear, it’s sometimes easy to forget that often the simple things in life still work just fine. While there is definitely a place for heavy-duty folders and gizmo-laden gadgets, often all we need is a basic tool for doing the mundane things that we encounter every day. A simple single-blade folder was the choice of cops, working stiffs, and gentlemen for ages, well before multi-tools, assisted openers, and folding fighters became the norm. SureFire delves into that realm of the practical EDC piece with their new Dart “Compact Folding Utility Knife,” but like everything SureFire does, the Dart is anything but pedestrian in nature.

Less is More
If you’ve followed the SureFire line, you’ll see that the Dart shares some features with their well-received Crank folder, but strips it down to a sleek, lightweight cutting machine. The Dart carries a top-quality 154CM blade that’s 3 inches in length. It has a drop-point configuration with a long slot in the spine to facilitate one-hand opening and an integrated bottle opener, which is exposed for use when the knife is closed. 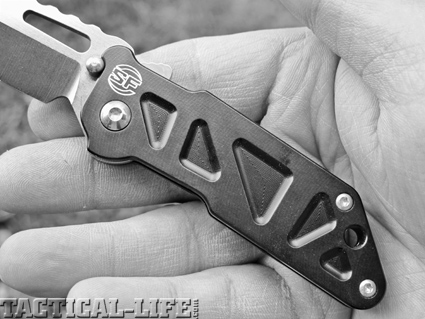 The Dart’s hard-anodized handle features a set of triangular inserts along either side. In addition to providing a modern 21st century look, they also add traction to the handle and help provide a secure grip.

The frame does away with the tools located on the butt of the Crank and replaces them with a shortened, angled pommel that’s sleek and compact. A high-retention pocket clip is affixed and set up for tip-up carry. The frame itself is made from Mil-Spec hard-anodized aluminum and encloses a steel bar lock. The bar lock is disengaged via a release button located on the spine just above the pivot pin. The Dart is 6.2 inches open and 3.7 inches closed. Weight is a mere 2.8 ounces. The SureFire logo is etched just above the pivot pin on the frame of the knife and a serial number adorns the spine. The angular butt proudly wears the “Made in USA” stamp. The frame itself carries a series of triangular indentations which are both aesthetic and help provide some traction to the otherwise smooth anodized aluminum. 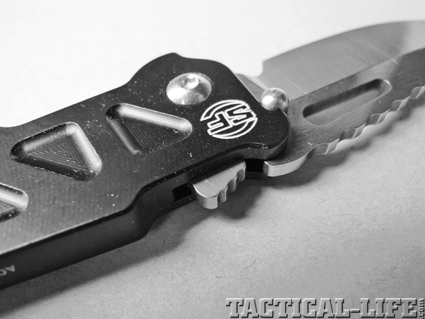 A steel bar lock is situated at the base of the Dart’s blade. To operate the lock, the user simply pulls back on the release lever with the thumb or index finger.