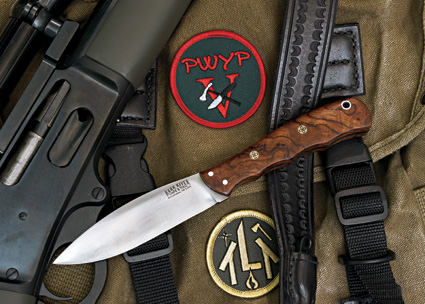 Beware when you start a joke. There is no telling where it may lead. Those that have logged in to the various knife-related forums on the Internet may have noticed that you can be whoever you would like to be. While you sit in the solitude of your home or office, you can claim to be “The Expert” on any subject being discussed. 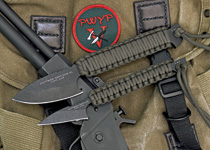 A little over five years ago I was taking part in a discussion on outdoor survival on a cutlery forum. There were one or two participating in the online conversation claiming, that given a good knife, they could survive any conditions that might arise while in the wilderness. It didn’t take long before I couldn’t resist putting my foot in my mouth. I offered an open invitation: Come on down to my place, try a little camping and practice what you preach. It wasn’t until the next day before I realized what I had done. A proposed date had already posted before I started thinking about the Internet being world wide! I spent a few weeks waiting for the appointed time, wondering who (or should I say “what”) would show up.

I will admit to being a bit surprised when four showed up for our weekend camping trip. The main result of the weekend was that total strangers found that you can make new friends practicing outdoor skills. Thus, the annual Practice What You Preach (PWYP) outing was spawned. What worked that first year has now worked for six years in a row. We surpassed 50 attendees in the fourth year and hit a total of 70 for this year. Even with the event being in North Carolina, less than 20 percent of those present were from Carolina.

Before you start picturing 70 guys roaming the woods eating bugs, let me explain a few facts of life. Being an old Eagle Scout, I learned the motto “Be Prepared” years ago and take it to heart. You don’t have to put yourself in an actual survival situation to practice your outdoor skills. Nothing says you can’t practice starting a fire with flint and steel while your dinner is cooking on the Coleman stove. You can make a debris shelter and still climb into your tent for the night. 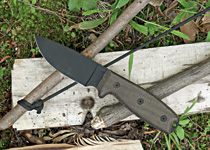 Gathering of Experts
In the past six years we have had some very knowledgeable people take part in the outing. Ethan Becker of Becker Tool and Knife has become a regular and this year Doug Ritter of the Equipped to Survive Foundation took part. Marty Simon of The Wilderness Learning Center has been sharing his knowledge for a couple of years. While a good many of those present could be classified as experts, some were learning outdoor skills for the first time. Expert or novice, we were there to practice what we preach.

The two major functions of the weekend are sharing knowledge and testing equipment in actual field situations. As to the latter endeavor, knives are our primary victims. We have had the personal knives of those present and knives sent by various companies wanting feedback on performance. Buck and Gerber have taken part in the past, and this year Condor, Bark River, Tops and Ontario all had products available for us to try. Various custom knifemakers such as Jerry Hossom, Charles May, Brian Goode, and Scott Gossman have found the outing to be a good testing ground for their latest custom models. It takes a brave maker to put his knives to the test in front of this group!

The formal activities did not start until Friday afternoon, but there was a sizable contingent present as early as Wednesday evening. But get a group of knife nuts together and one can spend a serious amount of time comparing new purchases and products. Our testing procedure on knives is very simple. All knives are kept at a central location under the main tarp near the campfire. Anyone can take any knife for whatever task is needed. You can try one or several and compare. The only obligation is to give an honest evaluation of its performance.

Back to the Basics Theme
This year we decided to go “Back to the Basics.” We had classes in various fire-starting methods, map and compass, plant identification, fishing and shelter-building. These are some of the activities one may face if lost in the wilds. They are also a good test for any knife carried in the woods.

Friday afternoon started off with a class in map and compass. I had already laid out a compass course prior to everyone arriving and found the Condor Bush Knife to be ideal for sharpening location stakes for the practice course. The Bush Knife and the Condor Wilderness Tool would get plenty of use during the weekend whenever heavy chopping was required. 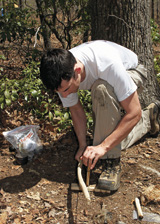 Saturday morning at PWYP has become a tradition. George Hedgepeth of the Briar Patch Outdoors School has given a plant walk for the past six years. This year Marty Simon, along with Kerry Pittman, a forester from Mississippi, assisted him. Food and water are at the top of the list for outdoor survival and a good medium-sized knife comes in handy for gathering edible plant life. When digging is required, simply cut yourself an appropriate digging stick.

That afternoon, fire was the subject and the medium-sized and smaller knives were put to the test. Large amounts of firewood can be found on the ground, but the best tinder usually is fashioned with the use of a knife. The Ontario Rat 3, Bark River Canadian Special and even the TOPS Hoffman Harpoon worked well in cutting fuzz sticks and splitting small tinder. Short of striking a match for your gas-powered stove, a good knife can help in building a fire no matter what method you use. If you do need to hack away at some larger materials, the Condor knives or even the Becker BK9 would be the tool to use.

You can’t camp next to a pond without having a fishing class and contest. We hit the timing perfectly this year, and the bass were biting. If you ever wondered if keeping a few hooks and a little line in your kit was worthwhile, the answer is yes. By the end of Saturday evening, everyone had tried the fresh fish along with their normal fare.

Sunday wrapped up the events with a class in shelter-building, and the value of carrying larger knives was proven again. You can get by with just a medium to small knife, but a large blade will speed the process of protecting yourself from the elements.

PWYP VI was by far the best of the six years. We not only had the chance to test various knives but had a well-rounded sampling of activities to put them to use. Nothing will build confidence in your number one survival tool more than actually using it in the field. If we weren’t trying the knives, we were talking about them.

Of course, learning the proper use of knives is always easier when you have that many makers and designers present. The concept of surviving in the wilds with just one knife may be possible, but the overall consensus of the group was that it is easier if you match your knife to the task at hand. The larger Condor Bush Knives, Becker’s BK Series and machetes present were perfect for the gathering of large firewood and shelter building. The medium blades such as the Bark River Knives and Doug Ritter’s Benchmade Mk.3 will do wonders for most of the typical chores around camp. Even the smaller blades were needed when it came time to clean game and fish.

The Knives Selected
As a side note, one of my personal objectives was to learn more about what this group expects out of an outdoor/survival knife. I asked those that attended to answer a few questions for me as to what they wanted in a knife. Some of the answers were expected while some surprised me a bit. 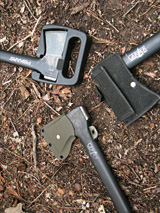 Everyone favored the concept of having more than one knife on hand during any outdoor adventure. However, when it came time to voice their opinions on what style knife would get the most use, they had formed definite opinions. A 5-inch blade length was the most common mentioned with only one going as far as to say he wanted a 9-inch blade. All wanted a blade thickness of 1/8 inch to 3/16 inch with only two mentioning 1/4 inch. All but one thought that having a full tang was an important feature.

As to the blade style, most mentioned, at least two options. Some listed either a drop-point or clip-point style, but just about everyone had a spear-point as one of their choices. Man-made materials such as G10 or Micarta were the handle materials of choice. A few picked stabilized wood as an option. The major surprise to me was the steel types desired. The field was split between carbon steel and stainless almost on a fifty-fifty basis. Very few stated that it had to be a certain steel. Most were concerned with the attributes of the steel more than hype of one steel over another. When it came to factory versus custom, they all thought that both types had their merits. The advantage of having a custom knife was the ability to work with the maker in selecting the design points on a given knife.

If you are wondering what happened to those knives we played with, the raffle at the end of the weekend was as exciting as ever. Everyone went home with a new toy. It may have been slightly used by the end of the trip, but they all carried the memories of sharing the outdoors with friends. Yes, next year I will make the same open invitation over the Internet for the seventh year. When the time comes, old friends and some new ones will gather to “Practice What You Preach.” 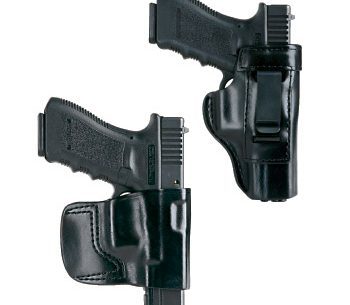 Beware when you start a joke. There is no telling where it may lead.…