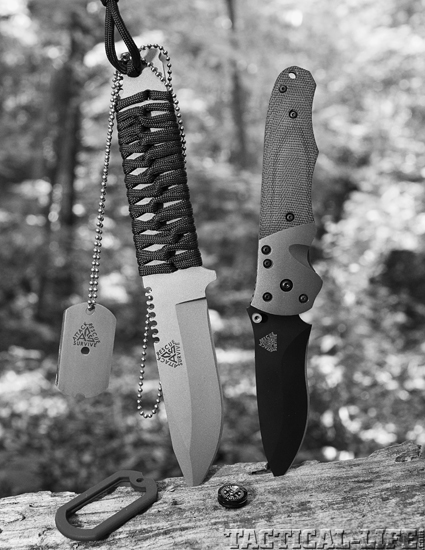 The DogTag Knife, Survival Blade and Utility Folder are common sense designs created by A.R.S. to fill a niche in the survival and tactical operations market.
Comment(s)

In my hometown of Gallant, Alabama, there’s a small post office, a volunteer fire department and a country store that probably sells more diesel fuel to farmers than it does gasoline to motorists. Around here it’s a safe bet that anyone over 40 has a pocketknife in their jeans or overalls. In fact, if you don’t carry a knife, then we figure you’re just not from around these parts. So, when I found out there was a custom knife maker moving in only a few miles from me, I assumed he would be at home here. I was right.

Alex Shunnarah has been making knives for more than 10 years but it all got started long before that. It was at the young age of 14 that he saw his first automatic knife and decided that someday he would make knives for a living. Fast forward to the late 1990s. Alex decided to set out doing his life’s work by building custom knife conversions—transforming folding knives into automatics. This alone helped him to learn about the physics and geometry associated with high-quality folders. As his experience grew, so did his customer base. Alex now has a small CNC machine shop and does small production runs with quality being his motivating factor. He also farms out some of his work, but all of his blades remain 100-percent made in the USA under the A.R.S. (Attack-Rescue-Survive) brand.

Company Lineup
The company’s lineup currently includes the Urban Protector double-action auto, the A.R.S. Utility Folder, a fixed-blade knife named the A.R.S. Survival Blade and the unique DogTag Knife. With more than 15 years seriously studying the Martial Arts and a lifetime in the outdoors, Alex’s A.R.S. brand is more about a philosophy on what works in particular environments than being an identity for a knife company. If I had to come up with a one-line description of A.R.S., I’d say they’re working knives with a custom flare.

While I don’t feel qualified to speak on the fighting capabilities of any knife, I’m more than capable of putting my two cents of wisdom on survival- and utility-style blades. About the time that Alex dropped some of his knives off to me, I was beginning to harvest vegetables from the garden, so the two folders got a pretty good workout cutting beans and potatoes for canning. I believe this world will eventually be separated between those who grow and preserve their own food and those who don’t; so a knife that works for a variety of chores will always be a valuable tool. Now, I realize that using a “tactical folder” in the garden is not as macho as testing knives for fighting and combat capability, but the fact is there are very few people that will violently cut human flesh in their lifetime. In our world, no matter how “uncool” it may be, utility and food processing will always be the biggest use of sharp edges. To be honest, the only reason I even care for “tactical” style folders is the convenience of one-hand operation and a pocket clip. They come in handy when you’re holding something with one hand and need to extract your knife to make a cut, which happens a lot when you live a self-sufficient lifestyle. 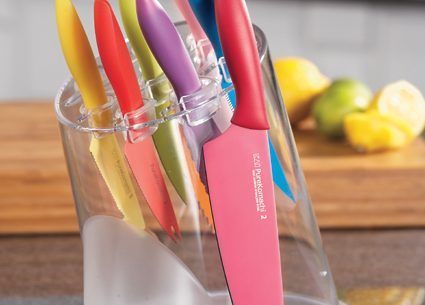 Not just pretty in pink, these new colorful Kershaw Komachi 2 knives will keep...