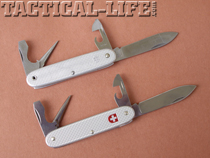 Despite the millions and millions of little red plastic-handled folders we all call “Swiss army knives,” none have ever been issued to the Swiss military. The first Swiss Army pocketknife in 1891 was a fairly basic tool with plain wood handles. Its handle scales were changed to “Fibre” in 1908 and aluminum in 1961. For a brief period between 1961 and 1965, the aluminum handles were red but this was again replaced with a “silver” color that remained standard issue up until late 2008. Which brings us to the really important announcement—the Swiss Army has a new issue pocketknife!

The previous 3-1/2-inch closed M1961 issue model offered a single spear-point blade, leather punch, combination bottle opener/small screw driver and a combination can opener/large screw driver. In the past, production was split 50-50 between the two Swiss knife companies, Victorinox and Wenger. Now that Victorinox owns Wenger, this agreement seems to have been discontinued. While the military models were in no way as elaborate as the hundreds of civilian variations offered by the two companies, they were good, inexpensive field knives that would stand up to a lot of hard use.

About a decade ago the German army replaced their issue folding knife (which just happened to be a Victorinox model too) with an updated hole-in-the-blade opening Victorinox folder, called the “One-Hand Trekker” in its civilian version. This liner-locking knife is 4-1/4 inches long closed and offers a 3-3/8-inch spear-point blade, 3-1/2-inch saw blade, the locking combination bottle opener/screw driver, a combo can opener blades/small screw driver, plus a Philips screw driver and leather punch that fold out of the back of the handle. Probably the most controversial feature of the knife is the fact that the blade is serrated for 2 inches back from the point. While putting the serrations out at the point seemed like a good idea to some, many American users felt the knife would have been more useful with a conventional straight edge. The other feature that drew criticism was that the liner-lock release functioned best left-handed. It is my understanding that the German army wanted a knife they felt was easy to open one-handed but that they didn’t really care if it took a little extra effort to close.

Civilian Variants
A number of civilian variations of the German issue knife have appeared in the last few years, including a few made for the American market with straight edges. Apparently, the success of the One-Hand Trekker eventually impressed the Swiss Army enough to take a closer look at it. In late 2008 they adopted their own version of the knife. The basic blade combination on the new Swiss military knife remains the same as the German army folder. Rather than the flat-sided oval hole used on the German knife, the Swiss model features a much easier to thumb semi-round oval. Other changes include 10 soft textured inserts on the handle for better gripping and a Swiss cross rather than a German eagle on the scales.

All of the One-Hand Trekkers are basically slip-joint folders with a liner-lock as a backup safety. Because of this, there is a certain amount of play between the blade tang and the locking bar when open. Once you accept this as normal, it doesn’t in any way affect using the knife as a field utility tool.

I think one of the most useful improvements in the new Swiss Army over the M1961 model is the addition of the 3-1/2-inch saw blade. As anyone who has ever used one will tell you, the saw blades in a Swiss Army folder will outcut 99% of the sawback survival knives on the market by a wide margin.

As much as I like the original M1961 model, I carry a “Farmer”—the issue knife with a saw blade added—on a frequent basis. You would be surprised how many uses you can find for that little pocket chainsaw! The new knife appears to be a much more versatile tool for military use. I’m sure the average Swiss trooper is going to be very happy with this upgrade. 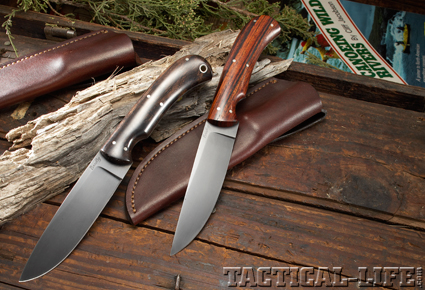 A living legend finds a new sheath knife that covers all camp and trail...