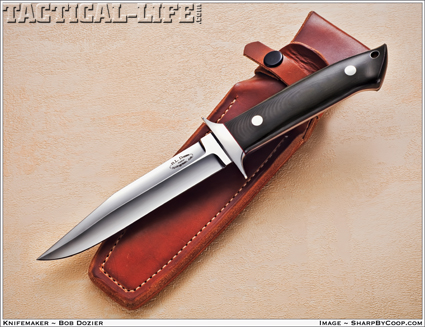 One of the real high points of the New York Custom Show was having a chance to handle Bob Dozier’s new classic Loveless style fighter. That is the sort of thing you can only do by meeting the maker in person at an event like the two under discussion.

Since the last issue of Tactical Knives, I have attended two knife shows on opposite sides of the country. The first was the “USN G2” (Usual Suspects Network, Gathering 2) over Labor Day weekend in Las Vegas. This was followed by the “New York Custom Knife Show,” which was forced to move to New Jersey due to a statist liberal Manhattan district attorney’s creative new interpretation of 50-year-old state laws. As it turned out, both shows equally proved that the public’s interest in the blades that make Tactical Knives go around is actually on the increase.

The USN “Gathering” is unique on the show circuit in that it is a hybrid combination of tactical gear and knives. That said, knives still dominated the tables of most displayers. USN members tend to be younger than the crowd that frequents some of the better known eastern knife shows and, if you want my opinion, more enthusiastic. They like knives because, well, they like knives; not because they think buying this or that maker’s work can be “flipped” at a better return than the stock market currently offers. And if you are a fan of tactical blades, you have Emerson, Strider, Spartan, Pro-Tech, Spyderco, Laci Szabo and many other well-known names to choose from.

The show turned out to be a very good venue for the magazine and it gave us a chance to meet many of our readers. Naturally, it is hard to beat Las Vegas for after-show entertainment and I think everyone that attended found ways to make it a memorable trip. I see this show as having a great future with lots of room to grow, though I wish the promoters could find a way to have the event on a weekend other than Labor Day. Buzz on the show floor was that all were looking forward to coming back in 2012.

Then it was New York’s turn. While no one was looking for a chance to go to jail in the Big Apple, many makers were skeptical about how well a show would do in Secaucus, New Jersey. An unknown number chose not to attend because of the move and at least one showgoer pointed out to me that there seemed to be a higher custom knife dealer-to-maker ratio than in the past. For some custom makers, it only takes a handful of well-heeled buyers attending a show to make it a success, but for a magazine like Tactical Knives, head count is everything. Apparently, moving to New Jersey was highly acceptable to the residents of the New York City area as, not only did the show have its largest crowd of recent years, I saw most of the same familiar faces I would have seen in Manhattan. The ease of parking at the New Jersey show compared to Times Square was often mentioned as a prime advantage of the new location. Everyone I talked to seemed to be having a far better show than they had expected.

Can the show be improved? It would be nice if some of the makers that seemed to have shied away this year would return. I’m a big believer in the more diverse the selection of makers and companies, the stronger a show will be in the long run. A show focusing on a small group of art knifemakers will eventually only appeal to an equally small group of art knife collectors. If the New Jersey show could look a little more like the USN Gathering and the Vegas show could find show dates besides a major holiday, life would be perfect! 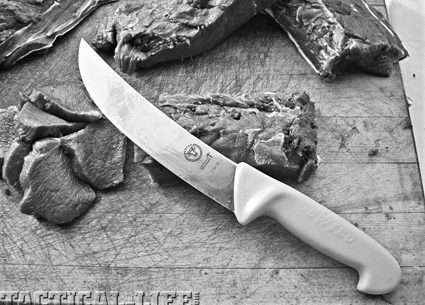