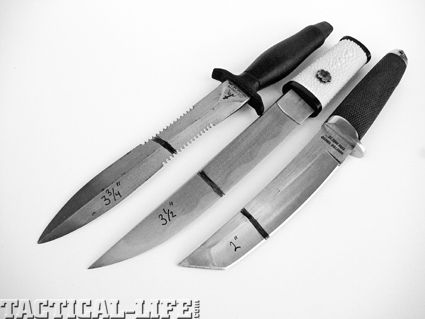 Stacking them up! When tested against a double-edged dagger and a traditional Japanese aikuchi, the Americanized tanto had the shallowest penetration. Its real advantage is the strength of its point, not its penetration, as many believe.

Attending tactical trade shows is a fun and educational way to interface with the end users of tactical knives. It’s also a great way to get a feel for the preferences and beliefs of those end users, both right and wrong. One request that I hear a lot is for tanto-style knives because, the users claim, they “are stronger and penetrate better than other designs.” To ensure that I’m on the same page with them, I usually ask these customers to sketch an outline of what they consider a tanto to be. Invariably, they identify what has become widely known as an “Americanized tanto” with a sword-style point, rather than the classic Japanese-style blade. Enter the myth of the tanto.

Tanto Roots
The popularity of the tanto in the U.S. can be traced back to two basic sources: the late custom knifemaker Bob Lum and Cold Steel founder Lynn Thompson. Lum, a supremely talented custom maker, was the first to marry the distinctive kissaki (the faceted tip of a Samurai sword) with smaller Japanese-style blades to create a distinctive hybrid. Although not true tantos by Japanese standards, they were very striking blades and planted the seeds of the tanto craze. Lynn Thompson watered (some might say fertilized) those seeds with his original Cold Steel tanto, which featured an even more pronounced katana-style point. Designed from the ground up as a production knife that would meet the demanding standards of ABS (American Bladesmith Society) testing, Thompson’s tanto needed a stout point to survive the ABS test that required the tip to be pounded into a piece of seasoned maple and twisted out sideways without breaking. A sword point did this very well, truly launching the tanto era and establishing Cold Steel as a major player in the knife industry.

For the record, traditional Japanese tanto are knives with a tsuba (disk-shaped crossguard) that typically measure about 12 inches long. Their kissaki are usually more rounded and taper more gradually than sword points. There are also other closely related patterns like aikuchi and hamidashi that differ from tantos in very specific ways.

Japanese vs. American
The true benefit of the Americanized tanto design is the strength of its “armor-piercing” point. When thrust into a protective layer, its strength allows it to penetrate and its shape allows it to achieve the full cross-sectional dimension of the blade very quickly, allowing the rest of the blade to slide in easily behind it. That’s why it performs so well on car hoods and other extreme penetration demonstrations. However, when thrust into a homogenous material (one with a uniform consistency), the American tanto does not penetrate as well as other blade designs because its point profile generates more drag. 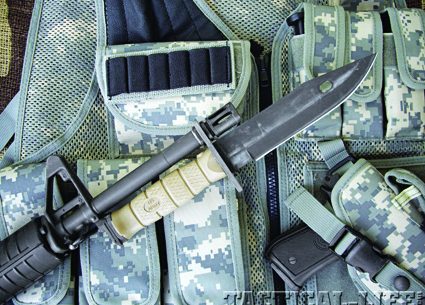 Stacking them up! When tested against a double-edged dagger and a traditional Japanese aikuchi,…