If you’re like my editor, you probably think you could go a good long time without looking at another Nessmuk design. But sometimes you have to think a little bit outside the box and keep looking, even when you think you’ve seen it all. Such is the case with the new Nessmuk from Dan Koster. The minute you pick up the shipping box, you know that you’re not about to handle yet another retread of George Washington Sears’ now famous skinning/hunting knife. For one thing, the box is a lot bigger and weighs a heck of a lot more than anything needed to handle Sears’ thin-bladed, hump-backed blade. Let’s take a look at Dan Koster and then see what exactly it is that he’s come up with.

About Dan Koster
Dan Koster is a 35-year-old knifemaker from Bentonville, Arkansas, which is in the northwestern part of the state. Dan brings a background in computer-aided design and a degree from a private liberal arts college to his work and he teaches CAD and design at a local community college. He makes knives part-time during the school semester and full-time between semesters. Dan says that he’s been fascinated with knives most of his life and came to knifemaking through a burning desire to create things with his own hands and the need to break free from the cubicle work environment. He sees himself as filling the niche of making practical knives for customers who want to use their knives, not simply collect them, and he strives to keep his prices reasonable and looks for ways to make that happen. He’s increasingly interested in doing mid-tech knives so that he can work on knives in larger batches but still keep most of the work in-house. He says this is the way to keep costs down while increasing production speed without adversely impacting quality. Dan said that his designs are heavily influenced by ethnic knife styles from around the world that have stood the test of time. While he takes inspiration from these pieces, he doesn’t simply make copies of them, but rather creates his own new designs using those influences. The Koster Monster Nessie is certainly one of those pieces!

The Creature Awakens
When you pull Koster’s Monster Nessie out of the box, you’re immediately struck with both the size and the weight of the piece. This is no thin-bladed skinner! As you draw the beast from its sheath, you can see its sinuous Nessmuk-influenced hump gliding from its leather covering like the mythical beast of Loch Ness rising from the depths. In fact, I think that Koster’s Nessie has more in common with the great lake serpent than Sears’ diminutive fixed blade!

While you can see the traditional Nessmuk influence in the humpbacked blade, that’s where the similarities between Sears’ classic design and Koster’s end. The Monster Nessie is a beast of impressive proportions. Dan starts with a 14-inch blank of 1/4-inch-thick 5160 steel, which is a great choice for a large blade that’s going to be used for heavy chopping. The blade is 8-1/4 inches long and a full 3 inches high at the peak of the Nessmuk hump. Dan puts a high flat grind on the Nessie that cuts down on weight somewhat (although this is still a stout piece!) and allows for the Monster to slice much better than its size would indicate. If you’re expecting an obtuse chopping edge on a blade like this, you’ll be pleasantly surprised to find that Dan finishes off the Nessie blade with his trademark “scary sharp” edge. The handle on my test sample is of natural canvas Micarta and is hand-filling large. It has a bit of a beak to the pommel to keep the hand in place while chopping and is fitted with epoxy and two brass pins and a brass-lined lanyard tube. The sheath provided with the Nessie was one by a local leathermaker and is of excellent quality. It has a pleasant basketweave pattern to it and excellent attention to finished details such as stitching and a finished welt.

Wood-Eating Monster
I had the opportunity to test out the Monster Nessie on a couple of spring camping trips, including Terrill Hoffman’s Practice What You Preach (PWYP) weekend. Now, on any larger blade I generally do a bit of chopping just to see how the knife handles, but with the Nessie, chopping is what it’s all about. Yellow poplar sapling seemed to just fall before the Monster and trimming poles to length took no effort at all. While I’ll generally try some batoning with a blade to see how it’ll do for fire and kindling prep, there was no need to do so with the Nessie. I found that I could split 3- to 4-inch diameter logs of approximately 8 inches of length with one blow of the Nessie! That’s pretty impressive performance. It’s much more axe-like than knife-like. I did notice a few hot spots while chopping from the squared-off edge along the rear of the handle scales, but this should be easily remedied by either asking Dan to knock off the corners a little more or even by just hitting it yourself with a file and some sandpaper. It was minor and only really noticeable after chopping for a while.

The Nessie’s big broad blade worked well as a draw knife, too. Simply grasp the knife at the base of the handle and hook your other hand behind the blade’s distinctive hump and you could comfortably plane down pieces of wood for various camp projects such as fire boards. Tent stakes were quickly made. You basically could sharpen a point on a tent stake with 3 to 4 quick chops rather than whittling as you’d do with a smaller knife. Speaking of whittling, I did try some finer work with the Nessie, too. While its edge is actually well suited to woodwork and it can work for more delicate tasks, I have to say that isn’t the Nessie’s forte. It’s a big blade and it handles like one. Luckily, Dan makes a few other blades that would nicely complement the Monster Nessie in the field.

Koster Bushmaster
Another Koster blade I had the chance to test out at PWYP was a prototype blade that Dan calls the Bushmaster. This is a larger knife than his Bushcrafter model (see sidebar) but certainly shares its lineage. The Bushmaster is 10 inches in overall length and sports a 5-inch blade of 3/16-inch-thick O-1 tool steel. The example that I used had a tapered tang and beautiful Desert Ironwood scales with red liners. It’s both an attractive and practical field knife. Whereas the Monster Nessie is a heavy cleaver of a blade, the Bushmaster is nimble in the hand and light on the belt. The Bushmaster came with a well-made bushcraft-style sheath made by JRE Industries that carried the knife high on the belt.

Since the Bushmaster lacked the size and the mass of the Nessie, I did baton with it to cut tent stakes down to size and to split smaller wood suitable for fire starting. I also used it to do the finer whittling that the Nessie was less suited to. The Desert Ironwood handles were comfortable in the hand and the 5-inch handle length provided plenty of space for a comfortable grip in a variety of positions. The Bushmaster will be available by the time you read this. Dan plans on offering a budget version in O-1 steel with Micarta handles for $145 and an Elite model in CPM 3V steel with Desert Ironwood handles for $235.

Whether you’re looking for a big brutal blade to use for campsite prep or even quartering game, or you need a finer blade for detail work, you’d do well to drop Dan Koster a line or check out his excellent website. In addition to the models discussed here, he has a number of other field and kitchen designs, including a smaller, more traditional sized Nessmuk knife, and he has a great photo tour of his workshop as well. Probably best of all is the fact that Dan stays true to his goals of creating great working blades at prices that the average working guy can afford. Even the big Monster Nessie is listed at only $245, with a plain sheath running $75 or a tooled one for $95. 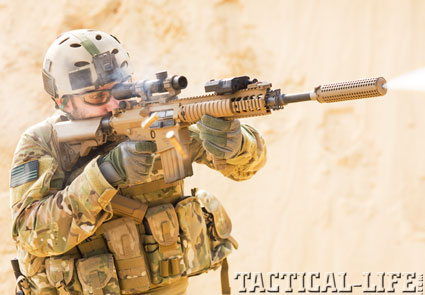 If you’re like my editor, you probably think you could go a good long…