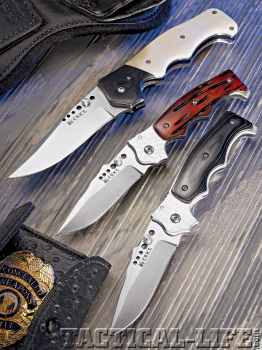 While I know as well as anyone that all of the marvelous new synthetics—G10, carbon fiber, Micarta, Zytel, Delrin and the like—are far more durable under extreme conditions than wood, bone or antler, I still have an affinity for natural knife handles. To be totally truthful, I’ve had a few organic handle scales shrink and occasionally one has cracked when dropped but I’ve never really had a catastrophic failure that would prevent me from continuing to use a knife. Natural materials simply have more soul than the sterile synthetic handles. They also tend to age better, developing a patina that you will never find on Zytel. Either that is important to you or it isn’t. It then goes without saying that Columbia River Knife and Tool’s new line of “Naturals” immediately drew my full attention.

The Marauder
Actually, these Pat and Wes Crawford designs started out as the “Marauder” but they liked CRKT’s designation better than their own, so the name of the custom version was also changed. The custom is a straight, one-hand manual opener, while the CRKT’s utilizes the company’s patented “Outburst” assisted-opening mechanism. Currently, the Columbia River line consists of four models: the full-size 4-inch blade Natural with white bone handles, and three versions of the 3.25-inch blade Natural 2 with a choice of white bone, brown jigged bone, and black Micarta (how did that one slip in there!?). The bolsters on the model 7085 and 7080 are both black Micarta, while the 7080J and 7080M are bare stainless steel. All have 8Cr13MoV stainless (a Chinese alloy) blades at a relatively hard HRC of 58-59. Each is opened by using the ambidextrous thumb pegs to push the blade partially through its arc. At about 45 degrees the Outburt mechanism takes over and swings the blade into the locked position. A heavy duty liner-lock bar secures the blade open. Suggested retail prices run from $89.99 for the smaller version up to $99.99 for the full-size model.

There is one thing for certain: At 10.4 ounces, the larger Natural is not something you want to walk around with clipped to the pocket of light dress slacks. This is a serious blue jeans, Carhartt, BDU and full battle rattle, LEO duty-belt kind of a knife. Given I’m pretty much an outdoor guy, this wasn’t a problem for me but the knife probably isn’t going to go over very well with the ultra-light backpacking crowd. The three smaller versions, on the other hand, tip the scales at a much more manageable 6.3 ounces. Maybe a little heavy for some but still light enough to have some crossover appeal for urban EDC carry. Over the last few months I’ve carried both sizes on a daily basis (sometimes with one in each pocket) and have been very impressed with their performance. 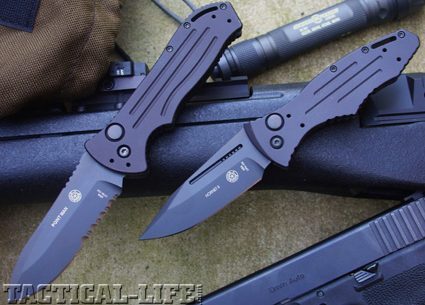