THREE FOR THE BUSH

0
SHARES
20
VIEWS
Share on FacebookShare on Twitter
The Habilis Bushtools have evolved rather quickly since their debut at the 2010 Blade show. The simplicity of the tools has remained the same; however, the materials have changed and they have been augmented by some new features. The new steel is 1095 versus the original 440C, the handle scales are now made of G10, features have been added to the Hand Axe, and the Bushtool sheath now offers multiple carry options.

Habilis Bushtools is a newcomer to the cutlery world, with their début having been the 2010 International Blade Show in Atlanta, Georgia. In fact, the company is so new that their line of products was still evolving even as the original designs were sent to us. I have since been provided with some samples of the second design evolution for testing, as well. I think, while their knives are made using modern materials and processes, some of them might best be described as retrospective innovations, as the design inspirations for some of their tools are a few thousand years old. Habilis makes a small variety of tools and the samples I received are their Bushtool and Hand Axe of both designs, and their original version of the Fire Tool.

The Bushtool
The Bushtool is first and foremost a knife, yes, but it’s not just a knife. It has an overall length of 10.25 inches with a blade that is 5.25 inches long, 2 inches wide, and 0.125 inch thick. The steel used for the original design, which debuted at Blade, is 440C stainless steel, hardened to 58-59 courtesy of Mr. Paul Bos, and it has a grey Duracoat finish. However, the new models currently in production are made of 1095 hi-carbon steel, which is hardened to 57, cryotreated for toughness, and protected by a coating of marine-grade epoxy. The handle scales were originally made of canvas Micarta; however, on the new design they have been upgraded to G-10 and it now comes in two colors: tiger-striped grey and black, and tiger-striped orange and black. 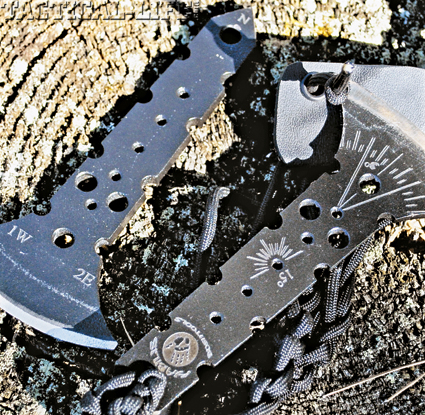 The new Hand Axe has distance, direction, and angle-finding tools engraved to the sides. On one side there is a simple clinometer and an angle finder. On the other side there is a physical reminder of how to make a solar compass to find true North, and the evenly spaced line of holes down the center gives the user a primitive mil-dot system.

In knowing that food prep is a primary task of any knife while in the bush, and having a fondness for cooking himself, Habilis Bushtools founder, Steven Staten, first started with his favorite Santoku and based his ideal bush knife loosely around that shape. The high handle and gentle rolling belly of the knife work very well together when preparing meals from scratch using fresh ingredients. The knife was fun to use for slicing mushrooms and onions, and dicing potatoes and meat to make a nice pot of stew over an open fire. Steven also added in a few elements to make the knife multifunctional in the woods. For fire-starting capabilities there is a notch in the spine for sparking a ferro rod, and there is a divot in the handle so the knife can serve as the bearing block for a spindle when using a bow drill. There is a scallop in the spine out near the tip that not only provides secure purchase for the thumb or forefinger when using the tip for finer work, but also works to keep a baton from sliding off the end of the blade when using that method to split wood. Even the tang extension is designed to multitask. The extension itself gives the user something to strike with if trying to crack ice to get to water, and it provides an area to strike when using the knife in chisel fashion. The upper area of the extension is rounded so as to be comfortable on the hand when using the knife with a rearward grip for chopping, and it can also be used as a scraping tool for troughing.