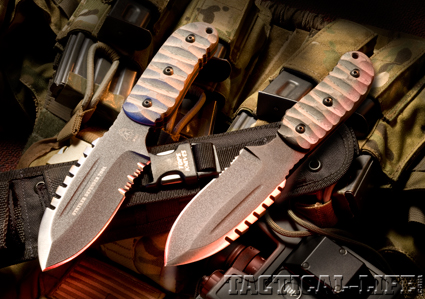 Highly mobile and lethal Stryker soldiers have been bred from controversy and bloodied in the non-linear conflicts in Iraq and Afghanistan. The Stryker armored vehicle is a mix of sweat, steel and rubber that dominates its battle space. Sergeant First Class OJ Bailey II, USA-SF (Ret.), spent the last eight years of a 20-year career working with Stryker soldiers at Fort Lewis, Washington. As an experienced Green Beret, he saw that they were missing an essential component in their kit, a tool for a mobile soldier, a supplement for the commuter warfighter. OJ called on TOPS Knives to design and produce not just another knife, but a tool that would meet the Stryker soldier’s demands. What was produced was the TOPS SDT (Stryker Defender Tool). The SDT is made for use in any possible environment, under the harshest conditions imaginable and always ready for the next time the operator needs it.

Medal of Honor Heritage
The SDT is named after two enlisted soldiers that were awarded the Medal of Honor for actions during WWII and Vietnam. Private First Class Stuart S. Stryker, U.S. Army, 513th Parachute Infantry, 17th Airborne Division, was dropped east of the Rhine River near the end of WWII. PFC Stryker ran to the head of a platoon of pinned down paratroopers in full view of a fortified enemy position while under direct and continuous enemy fire. PFC Stryker rallied the platoon and joined them on an assault of the position, only to be killed 25 yards from the objective. Other elements of the company were able to surround the position, capturing more than 200 enemy soldiers and freeing three members of an American bomber crew being held prisoner.

Twenty-two years later near Loc Ninh, Republic of Vietnam, Specialist Fourth Class Robert F. Stryker, U.S. Army, 1st Infantry Division, was with a unit that was suddenly met with a hail of rockets, automatic weapons and small-arms fire from concealed enemy forces. Sp4c Stryker repeatedly fired grenades to silence enemy positions and enabled his comrades to prevent an attempted encirclement. He was mortally wounded when he threw himself on an enemy command-detonated mine just as it went off, saving the lives of at least six of his fellow soldiers.

In 2002 the U.S. Army honored both soldiers’ heroic service by naming the M1126 eight-wheeled Light Armored Vehicle that can carry 11 soldiers and weapons at speeds of more than 60 miles an hour after them. The Stryker, the only successful American armored vehicle named for enlisted warfighters, is fast and quiet and draws on reconnaissance drones, eavesdropping equipment and the Army’s most advanced communications gear to outflank an enemy rather than outslug it.

Built From The Battlefield
To make sure that TOPS conceived a blade that was worthy of the Stryker soldiers, OJ went directly to the “subject matter experts,” the GIs themselves. Accessing real world combat experience, SGM Pete Motta (an original Stryker soldier) told OJ and TOPS the straight skinny on what a soldier faces on the mobile battlefield today. The modern warfighter wants a tool that can dig, saw, cut, pry, snap wire, and be fully functional wet or dry. It has to be big enough to be an effective tool or weapon but not get in the way while strapped on the warrior’s IOTV (improved outer tactical vest). It has to be handy but not a burden, easily grasped and designed to not slip out of your hands when force is applied. It needs to be used knowing that the edge can be easily resharpened and it will not break when leverage is applied. With those conditions set, SGM Motta and SFC Bailey drew up the design that TOPS Master Craftsman Polo translated into cold steel.

To start, TOPS used their unique Rocky Mountain Tread Grip for the 3/4-inch thick handle. The textured Micarta is impervious to oil and moisture and provides for a firm grip with wet or dry, bare or gloved hands and is colored to blend with the Army’s ACU camouflage pattern. As a user option in a survival situation, the removal of three screws in the handle allows the user to take off the grips and wrap the butt with 550 cord, giving the user up to 25 feet of useful cord. The blade is 1095 carbon steel, a time-proven material for combat and utility knives, well known for its ability to take a beating in the field. TOPS wants their knives to be used for a lifetime and the 1095 steel can be resharpened frequently to provide durable quality for a tour or two or three! The 1/4-inch spine of the blade has a very deep and serious sawtooth pattern cut deeply into the steel. Butchering wood, plasterboard and aircraft aluminum pose no problem for a motivated user. The cutting edge is beveled with serrations just behind the 2-inch forward strike zone for slicing any kind of rope or strapping. The spine of the knife has a 3/8-inch-thick false edge. A fully sharpened false edge would have disallowed the strength needed for tip prying, a very common use during breaching or during combat situations. Once again, a useful knife is a strong knife that will not fail during critical use.

Fit For Combat
The SDT I got was a stubby, sharp battle implement that was well balanced and comfortable to hold. Either in a blade up, blade down or ice-pick grip, the finger grooves in the SDT ensure that the operator controls the orientation of the blade no matter how it is held. As designed, the back edge made short work of an aluminum shed wall that doubled as a helicopter fuselage, while the serrations on the back half of the blade went through a length of half-inch rope like Congress goes through money, effortlessly and wanting more. The choil at the base of the blade made it easy to choke up on the SDT for fine work. The ability to resharpen the durable 1095 steel makes this a perfect field knife for skinning and hard camp chore work. The thickness of the blade made it easy to split 14-inch pine board, either with one blow with the grain or a stab and twist in the middle. Very tough, indeed! The shortness of the blade makes it easy to carry either on your belt or a vest, while the optional TOPS sheath gives you the ability to mount it up or down on your MOLLE gear or IOTV.

TOPS purposefully made the Stryker Defender Tool to serve as a durable, strong, edged individual breaching tool for American soldiers. The SDT can be easily wielded in cramped confines to cut and free trapped people or hack your way out of a burning bird. Recognizing the tool’s effectiveness, the Army has contracted to buy hundreds of SDTs for soldiers that need an improved, edged battle tool. All the tasks GIs have been doing for years are contained in the Stryker’s mission statement. It can and will be used to pry doors, dig out roots and cut open letters from home. It is not meant to be pretty, but the broad blade, firm grip and thick spine give it an all-Army look that means all business. And that makes it pretty to me.