0
SHARES
12
VIEWS
Share on FacebookShare on Twitter
The two sizes of the Nighthawk cover most potential user’s needs. While the smaller knife is very handy for outdoor use, the larger model would be author’s first choice as an infantry combat blade.

If there are two things the cutlery industry is overrun with it is “genuine issue SEAL knives” and guys claiming to be the “official knife-fighting instructor to the SEALS.” You would almost have the impression that the SEALS spend about 90% of their time picking a new knife and training with the latest subject “expert” on how to use it in close-combat. Still, there is no denying most cutlery companies would dearly love to be able to say their knife was the primary issue edged weapon of Naval Spec Ops. With that in mind, many have provided prototypes to the Navy for testing and others have put a lot time into trying to meet the military’s design requirements. For whatever reason, the Navy seems to be an extremely difficult customer to convince. While many interesting prototypes are never released to the public, a few go on to be commercial successes on their own. One in particular I was personally involved with from the very early stages was the Buck Nighthawk. 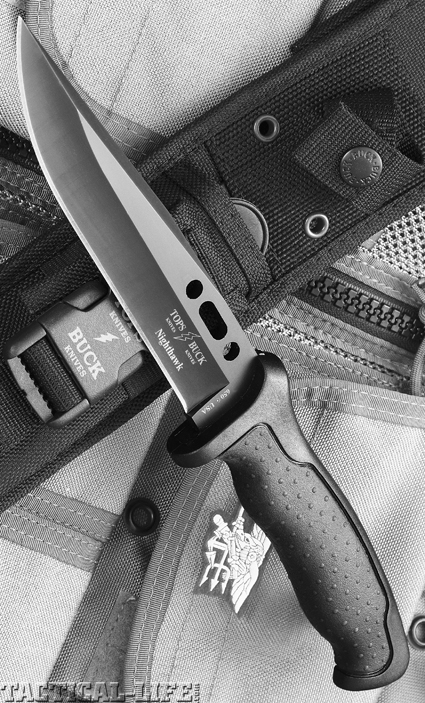 Why the Navy rejected the Nighthawk for use by the SEALs is beyond the author, as he has long thought it to be one of the better commercially made military type blades on the market. Buck and TOPS latest version is an excellent example of this. This is the larger 6.5-inch blade model that would be his first choice for ground combat.

Early Work
It has been almost two decades since Buck first tried to work with the Navy on this particular knife development project. Using the same basic handle, the company offered the SEALs a choice of blade lengths, point styles, serrations and other options. At the time, Buck sent me samples of the several versions to evaluate on my own. I was impressed, as two or three seemed to be very practical field knives at a potentially reasonable military acquisition price (it always pays to remember the military likes to buy things in large quantities at low per unit cost). In the end, the Navy appears to have decided to not decide, a common enough problem with all new equipment programs.

Buck went on to introduce the knife to the public as the “Nighthawk” and, over the last couple of decades, has offered it in two blade lengths and several point styles. The latest versions are a joint design project with TOPS Knives. Maybe I should start by pointing out I’ve long felt the Nighthawks were true sleepers when it came to potential military/survival knives. They are of reasonable size, lightweight, durable, practical design, and priced right. For all those troops out there that feel they can’t afford a fancy custom on an E-4 salary, you could do a lot worse than adding a Nighthawk to your gear. 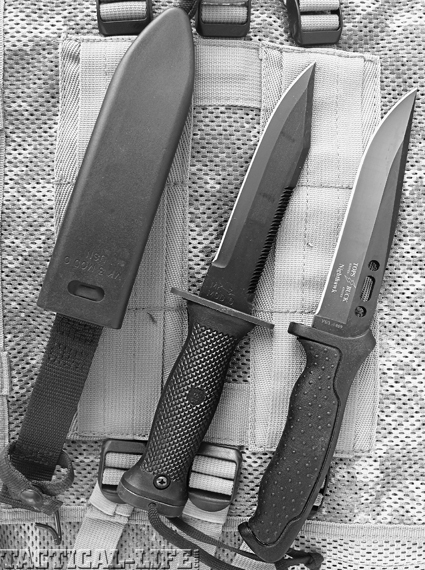 If it had been adopted, the Nighthawk would have been a replacement for the USN MK-3 that, in turn, had replaced the MK-II (KaBar) first fielded during WW-II.