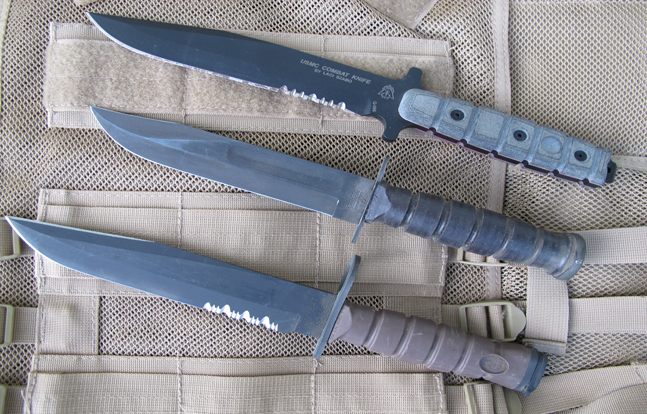 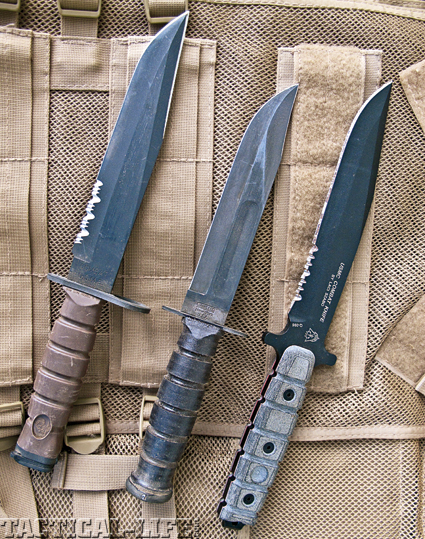 Left, USMC OKC3S bayonet, center, US M-7 bayonet, right an Onatrio product improved version of the M-9. The M-7 was USMC issue from Vietnam up to the adoption of the OKC3S in the early part of the last decade. Ontario’s OKC M-10 simply replaces the less than useful round grip of the standard M-9 with an oval model. A simple change but a major improvement.

In virtually every army of the world, bayonets are thought of by the troops in the field as just extra weight that some chairborne commando decided to make them carry. This is because, while they may look like knives, very few models are actually designed to serve as functional cutting tools. One of the classic examples of this is the Russian AKM-47 bayonet. At first glance, it appears to be a very practical and reasonably lightweight weapon with a built-in wire cutter. A closer examination will quickly prove that they are ground with a single-bevel chisel-edge that, as issued, is duller than the average butter knife. Good luck trying to sharpen it in any kind of real life field situation. I have yet to find a used AKM bayonet that was ever honed to a serious cutting edge by its original owner.

Since the adoption of the M-4 bayonet for the M-1 carbine during World War II, U.S. troops generally have been much better off than those in most armies. The long series of weapons based on this blade pattern—the M-5 for the M-1 Garand, M-6 for the M-14, and the M-7 for the M-16 family—were all at least marginally adequate for use as hand-held knives. The army’s more recent M-9, adopted during the 1980’s, was one of the first really serious efforts to give the troops a weapon that was a knife first and “spear-point” second. I know not everyone loves the M-9, but it is a whole lot better weapon than most of our enemies have access to. 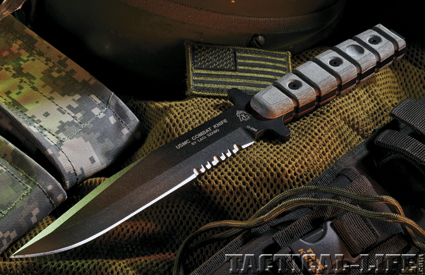 Laci Szabo’s prior service in the Marine Corps was instrumental in his creation of the TOPS/Szabo USMC Combat knife. Keeping the design within the basics of use, form, and fit—this knife was made not only for the military, but also as a great general use outdoor tool. STEVE WOODS PHOTO

Though the U.S. Marine Corps took a serious look at the M-9, and actually issued several thousand for testing, they eventually adopted an entirely different weapon, the Ontario OKC3S. Let me go on record here as saying that I think this is the best bayonet currently issued to any military organization in the world. At 8 inches in blade length, the OKC3S is the longest standard model since the 10-inch M-1 for the Garand. The blade and point style are reminiscent of the legendary USMC fighting/utility (kabar) with the addition of modern serrations at the base of the blade. While I’m not a big fan of this last feature, it is certainly true that the troops in the field are sold on them. The cutting edge on all the OKC3S’s I’ve handled was sharp enough for most field use and it was no problem to make them still sharper if needed. Like the blade, the comfortable grooved handle is similar to the time-proven USMC combat knife. Probably the only really negative thing I can say about this bayonet is that, like all of the M-16 family of blades, it requires a large muzzle ring to fit over the rifle’s flash suppressor and a heavy latching mechanism in the butt of the handle. This isn’t the end of the world, but it does make the bayonet a little awkward as a hand-held knife in some situations. 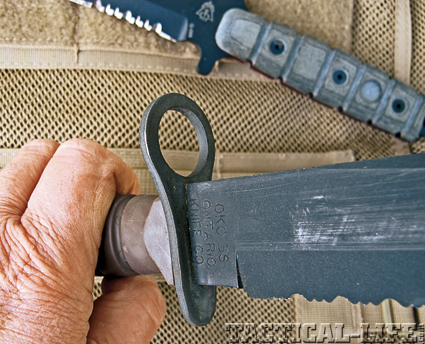 One of the main problems with any of the M-16/M-4 family of bayonets is the large metal ring required to fit over the muzzle flash suppressor. While most learn to live with it, the ring tends to be in the way when using the bayonet as a hand held knife.

Szabo’s Answer
As a former Marine, knife designer Laci Szabo had a solution to the muzzle ring problem. Working with Mike Fuller of TOPS Knives, they created a new model that is simply being called the “USMC Combat Knife.” While the blade follows the basic pattern of the OKC3S, it is a full ¼-inch thick, as opposed to the 3/16-inch spine on the issue weapon. Like many of TOPS’ combat and survival models, the Szabo USMC is plain 1095 carbon steel at a tough but practical 56-58 Rockwell hardness. The grooved USMC-style handle is black linen Micarta and the sheath is ballistic nylon. Its weight is 17 ounces and its suggested retail price is $179.95.

While the thinner blade of the OKC3S means it is a little lighter (14 ounces) than the TOPS, obviously a ¼-inch thick blade will be stronger than the issue 3/16-inch. Ontario’s blade offers the fully sharpened false edge of a true fighting knife but the TOPS version is only ground to a steep, “almost” sharp edge. Though I fully understand “double-edged” points can cause legal problems in some areas, I really think they should have ground this down that extra fraction of an inch. As it is, a little work with a file or a skilled hand with a belt sander could quickly correct the problem. Civilian users, on the other hand, probably have little need of that extra cutting surface for normal field use. 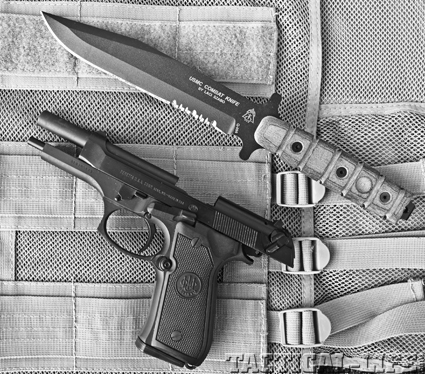 No matter how many mags you carry for that handgun, there can still be a time when it locks back dry. TOPS USMC will never run out of ammunition.

Along with not having the bulky bayonet mounts, the TOPS knife offers a beveled projection at the base of the handle that can be used as a light pry bar. In all honesty, given the thickness of the blade itself, I probably wouldn’t hesitate to use either end for light prying if the situation called for it. It is just a matter of using common sense, as anyone should know when they are pressing their luck prying with their knife and when they aren’t. For all those people out there that insist any field knife should also serve as a firewood splitting froe, this is one knife that certainly won’t let you down.
My own first use of the TOPS was to cut down and chop up a large patch of sweet corn stalks for composting. You can pretend this was all “elephant grass” in a South Asian jungle if that will make it sound more romantic, but from past field experience I would say the two are about equal in toughness. The 8-inch blade gave the knife enough length to perform this task with excellent efficiency.

Heavy Duty
The knife worked equally well for chopping down small saplings and clearing various kinds of brush and vines around the pasture. While the primary edge is a little thick in cross section for rope cutting, the short section of serrations allows you to saw your way through most lines when needed. In all honesty, this is not a knife that is overly suited to delicate cutting chores. As infantry troops are fond of saying, their sole reason for existence is to “break things and kill people.” Laci’s design is perfectly geared towards that goal. Knives like this are for when you need to do the job in a hurry with no concern for finesse. You can dig, chop, pry, slash, and stab with your full body weight behind the blade without fear of it giving up before you do. In other words, you can easily do the kind of activities that the Marines have always been famous for. 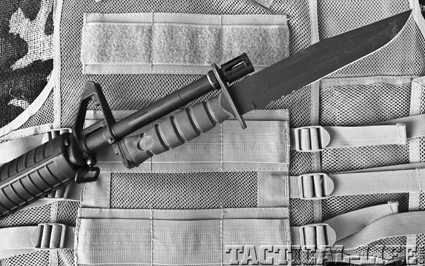 The Marines are one branch of the service that still believe in the importance of being willing to close with the enemy down to cold steel distances. The lethal appearance of the OKC3S bayonet reflects battle theory.

Probably my only complaint about this knife is with the sheath. While it is made of high-quality ballistic nylon fiber and offers a hard plastic liner for jump safety, TOPS has went with double Velcro loops around the handle to secure the knife in the sheath. Velcro closers have many legitimate uses, but I really think it should be left off knife sheaths, especially heavy battle blades like this one. It simply doesn’t secure the knife in a manner I would ever trust on a parachute drop.

And you don’t make a lot of friends by showering the guys below you with sharp objects on a jump. And then there is the issue with the noise Velcro creates when opened. It might not seem like a big thing to a civilian, but it can sound very loud in the dark when you are ten feet away from that Taliban sentry. On the positive side, the sheath is totally ambidextrous. Add a couple of snap loops and I would be much happier with it. 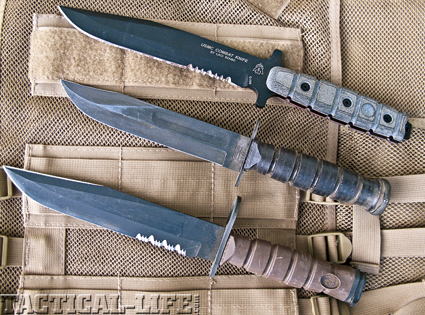 The TOP/Szabo (top) and the Ontario bayonet (bottom) are both intended to carry on the legendary traditions of the USMC Fighting/Utility (center). All are first class combat/utility knives for the conditions an infantryman really faces on the battlefield.

Some may want to ask why a troop would want to buy the TOPS/Szabo if the Corps will issue him the bayonet for free. For starters, bayonets are normally reserved for those issued rifles as their primary combat weapon. If you are the man behind the M240, M249, or M27, you will need some other edged weapon. Traditionally, that has been the USMC “Fighting/Utility,” but for those that want an extra margin of performance, the TOPS knife is there to provide it. Handier than the OKC3S and stronger than the kabar, this is a knife to cross that last few meters of ground with. 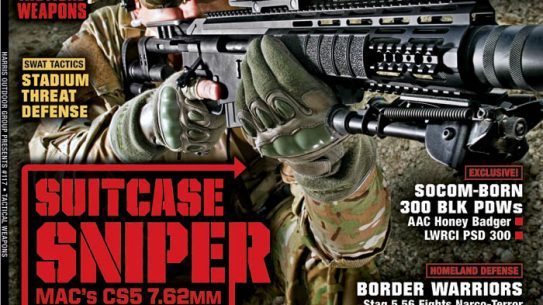