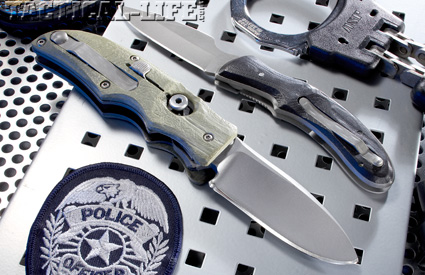 The weapon retention method I learned many years ago basically consisted of locking down the handgun in the holster with the strong hand as someone tried to snatch it, then pounding on the “boob’s” arm with the support side fist. With experience and other training, I developed some variations on this theme. I still normally practice locking down the handgun with my strong-side hand, but now I would tend to either stick a backup handgun in the “boob’s” ear or start slashing at his arm and hand with a knife drawn from the support (left in my case) side pocket. Some agencies actually teach the use of the blade in weapons retention training. One that I know of even had a local machinist cut a hook in the backs of the blades of issue folders and taught officers how to use the hook to catch on the back pocket and open the blade as the knife is drawn. I’ve had a demo from one of their personnel and the presentation is very fast. 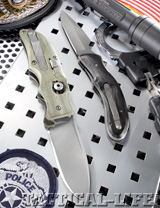 Clip It Or Not?
Basically, I wanted a pocket clip sometimes and not other times. I dealt with this in a couple ways. I tried using a small screwdriver and removing the pocket clip if I wanted to carry the knife in my pocket or reattaching it if I wanted to carry the knife clipped to the pocket. Yeah, that was dumb! Usually, one or more screws would end up on the carpet of a hotel room where I would not want to black light the area and certainly didn’t like crawling around. I also sometimes had a pair of the same knives, one with the clip removed and one with it present. That worked okay.

What works best, though, is Dan Valois’ patented “Stow-Away Clip.” This clip is inset into the grip panel when not in use but is easily deployed to affix the knife to a pocket by just depressing a button that flips the clip open. After only operating the “Stow-Away Clip” a few times, I found that I could easily slip the knife in a pocket or remove it with one hand and clip it to the outside of the pocket. That is a useful feature for any time you don’t want to draw attention to the fact that you have a good-sized folder.

Key-Lock System
Valois incorporates a couple of additional useful features into his folders. His “Key-Lock” system, for which he has a patent, is an extremely strong lock. On his website, Valois has photos of him hanging from one of his knives with the lock applied, and he’s a big guy! The lock actually works in conjunction with an interesting deployment system on the Valois folder that I am currently carrying. There is a button located on the bottom grip panel for those who are right-handed. Operating the lock slides a pin beneath this button, thus securely locking the blade. This same button, when pressed with the lock off, flicks the blade out about a half-inch or so, allowing it to be deployed by a quick flip of the wrist. Should the knife be carried on the left side, as I sometimes do, then the button is pressed with the thumb and the knife is opened by a flick of the left hand. I actually like this system better than having to shift my thumb to operate a stud or a cutout to get the blade started. That’s personal preference on my part probably. The folder does incorporate small studs on each side of the blade for those who want to use the thumb after the lock releases the blade.

Valois also makes the same basic knife as an automatic with the button located in the same place. On my test example, I find the button rather stiff and I have difficulty operating it with my right hand. I must point out, though, that this is a prototype knife sent to me primarily to evaluate the “Key-Lock” and “Stow-Away” clip. Dan told me the button release would be stiff. I’m confident that it will work in over time.