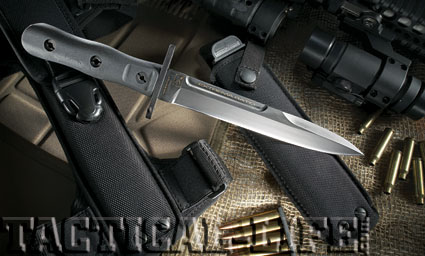 Modern tactical knives owe much of their origins to the machine gun-dominated “no man’s land” of World War One. As the battlefront became stalemated in deep trenches behind vast fields of shell craters and barbed wire, launching nightly raids on the other side’s positions became SOP. The long bolt-action rifles and sword-length bayonets of the period were less than ideal for fighting in the close confines of a muddy ditch. Instead, hand grenades, pistols, entrenching shovels, clubs, and a new weapon, the “trench knife,” became the standard tools of the trade. For many armies, this was the first time a combat knife had actually been widely issued to ordinary infantry troops. 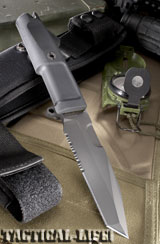 Given the dumbed-down version of history taught in modern schools, it is easy to forget this wasn’t simply a war of England, France and the U.S. against the “evil Germans.” Most of the other European countries fought on one side or the other, with the Austro-Hungarian Empire being one of Germany’s primary allies. While it is probably one of the least known knives of the war, Austria issued what I personally consider the best infantry combat knife to serve on the western front.

Austro-Hungarian Trench Knife
Unlike useless fantasies like the triangular-bladed US M1917 knuckle knife, the Austro-Hungarian knife looks like it was designed by an experienced combat soldier. It featured a straight, single-edged, spear-point blade 8-1/2 inches long, a modest, double steel cross guard and a very plain wood handle. Large enough to serve as an effective weapon, handy enough to serve as a useful tool, and simple enough to be produced in massive quantities at a modest price, what more could you ask for in a combat knife?

Apparently, the Italians on the other side of the Austrian trench line felt the same way. Not only were large numbers of captured knives used by the Italians during WW-I, they made a few small improvements in the design and reissued it to their own troops during the next world war as the M1939 Paratrooper. Though I know the Italians were not known for their cutting-edge military technology (no pun intended) during this period, I would have to rate their combat knife right up there with the legendary U.S.M.C. “kabar” for practicality.

With the help of the Italian C.O.F.S. (Comando Operativo Forze Speciali) and its commander Gen. Bertolini, Extrema Ratio has introduced a modern version of the “Pugnale da paracadutista assaltatore Mod. 1939” (Italian parachutist knife Model 1939). One of the little known facts of military history is that it was the Italians in WW-I that made the first combat parachute jumps, dropping from English bombers behind Austro-Hungarian lines.

Modern M1939 Paratrooper Knife
While the new model follows the general lines of the M1939, it utilizes totally modern materials intended to make the knife even stronger and more functional. The Austrian-made Bohler N690 steel blade (Rc 58) has been shortened down to a more manageable 7.5 inches. While not actually honed to a cutting edge, the 3.5-inch swedge on the spine could easily be taken the rest of the way if the user felt this was desirable. One of the original advantages of the Italian M1939 over the Austrian version was that the handle was contoured to fit the hand better. Extrema Ratio has carried this design forward and improved it for modern combat by changing the handle slabs to “Forprene,” a NATO Mil-Spec elastomer.

Another strong point of all of the Extrema military fixed blades is the thought and high-quality materials they put into their scabbards. Being able to safely carry the knife in a position compatible with your other web gear is nearly as important as the knife design itself. The 39-09 actually comes with two sheaths; the first is a low ride, double leg-strap drop model of the type favored by modern Spec Ops units, and the second is a more conventional belt scabbard. Both are hard plastic lined and completely jump safe (after all, this is a paratrooper knife!). The low-ride model, in particular, has three different retention systems to hold it in place during the opening shock of a parachute. The main body of the scabbard clips over the knife hilt, a double-snap loop wraps around the handle (Hallelujah! No Velcro!), and a removable nylon flap drops over the entire handle and snaps into the front of the sheath. I should probably also point out that the scabbard bodies are completely ambidextrous. Before all you right-hand guys start discounting this, I’ve noticed a trend in recent years of going back to the old WW-II theory of carrying the handgun on the strong side and a knife on the opposite hip.

Bohler N690 Steel
Bohler N690 is said to be a European version of 440C stainless with cobalt added. Its 1.07% carbon and 17% chromium content make the alloy relatively high in both of these important steel ingredients. There is also a bit of vanadium in the mix for finer grain structure. One source I’ve read said it felt N690 was very close in performance to VG-10 and 154CM. In recent years, this alloy has been the preferred steel for most of the high-performance military cutlery made in Europe.

Given the winter weather extremes we were having during my evaluation of the Extrema paratrooper, I didn’t have any problem putting the corrosion resistance of N690 to the test. Rain, snow, ice, mud, the knife was left out in all of these without any signs of damage. Needless to say, that is a strong virtue in a military knife.

The knife proved large enough for light chopping work and the edge geometry functioned well on green and seasoned hardwood. On the other hand, it would probably need roughing up on a coarser benchstone to slice manila rope efficiently. The upside here is that most modern synthetic ropes and webbing are much easier to cut than manila.

I have never understood why the full double-edge British commando style of knife was so popular in WW-II. As many have pointed out in the past, about the only mission the Fairbairn/Sykes is ideal for is stabbing someone in the back and you had better not hit bone or metal while doing it! It would have been so simple for them to design a stronger single-edge knife like the M1939 that would have performed the same functions plus a lot more. With a fully sharpened false edge, penetration is not going to be a problem and I seriously doubt the wound would be any less lethal. Even in the most elite units, sentry removal situations are always the rare exception to military knife use. While it is always a good idea to be prepared for Murphy to rule the day, having a useful tool the remainder of the time is more practical.