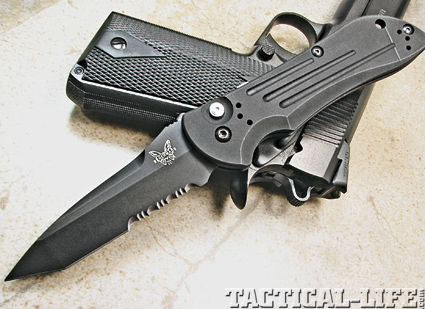 The Auto Stryker has a robust blade, comfortable handle and the tactical heritage to claim a position at the top of the tactical automatic food chain.

The 910 Stryker is one of Benchmade’s most famous and prolific tactical models. The potent package was developed by the Lone Star state’s Allen Elishewitz during the bloom of the tactical knife renaissance and it has many of the features that set a true tactical knife apart from the pack—a contoured, comfortable handle with a built-in guard area, a strong blade designed to take the pounding of hard use, and a pocket clip that is reversible and handy for everyday use.
Originally designed as a one-hand opening liner lock in 1998, the Stryker quickly morphed into a service-oriented button-lock automatic, where it has been a perennial favorite of those who serve in and out of uniform for many years. Recently, Benchmade updated the Auto Stryker, and the revisions they have made are well executed and nicely improve on the classic design.

Elishewitz Ingenuity
Allen Elishewitz worked with Benchmade for several years and designed some of their best tactical models. The Stryker is perhaps the one he is best known for. Allen morphed many of his early, hard-use tactical folders and his military and martial arts background experience into the Stryker, and the resulting knife was a runaway hit. The Auto Stryker quickly received accolades and became a common knife in the pocket of many cops and soldiers looking for a fast-handling, ergonomic pocket folder suited for hard work. It’s not a huge knife; it has a 3.6-inch blade that is easy to carry, and the whole package, with an aluminum handle, weighs in at a portable 4.2 ounces—less even than many G10-handled “lightweight” tactical folders. The blade of the Stryker is a very functional modified Tanto that is double flat ground on both sides and super thin at the edge, and the result cuts quite well. The tip is strengthened for tough thrusting tasks and is ground to a needlepoint.