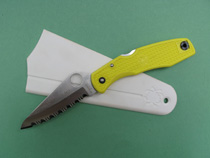 In 1910, Adoph Coors, better known for a liquid refreshment brewed in Colorado, invested in the Herold China and Pottery Company. Shortly after WW-I it was renamed Coors Porcelain and in 1986 the name was again changed to Coors Ceramics. I have been told their products now play a critical part in the space program for use on reentry nose cones. What I don’t know is who first discovered that Coors ceramic could be used as an abrasive for sharpening cutting edges. During the early 1970s, one cutlery company marketed a ceramic “Moon Stick” knife sharpener, which I assume was a reference to the material being used in the space program. At the time, I was extremely impressed with the effectiveness of the rod at putting razor-keen edges on blades but, for some reason, it didn’t seem to catch on.

It took the promotional skills of Sal Glesser of Spyderco around a decade later to really bring ceramic sharpeners to the public’s attention. Soon, thousands of knife users were singing the praises of the “Triangle Sharpmaker” and its Coors rods. Spyderco has continued to expand their line of ceramic hones since that time. The most recent editions include the 307F “Slipstone,” the 306UF 3X8 “Ultra Fine Wide Benchstone,” and a ceramic version of their earlier diamond-coated “Duckfoot” multi-angle sharpener called the “Golden Stone.”

Ceramic Makeup
Technically, Coors ceramic is a form of aluminum oxide. Natural forms include corundum, ruby and sapphire. It is given a rating of 9, second only to diamond, on the Moh’s scale of mineral hardness. There are also several manmade forms of the material, including that used in the famous Norton India stones.

As with most synthetic abrasives, Coors ceramic can be produced in a variety of grit sizes but, in general, all tend to be on the finer end of the scale. Spyderco’s gray ceramic is said to run around 800-900 grit, while the white is 2000-3000 and super-fine white around 4000-6000 respectively. I assume this is on the Japanese grit scale, as the normal American system doesn’t run much above 2000.

Given these relatively fine grits, I have always found that Spyderco’s stones are best used to maintain edges before they actually get dull and to periodically touch up blades while in use. This isn’t to say you can’t hone a really dull blade on any of them; it is just going to take a while. 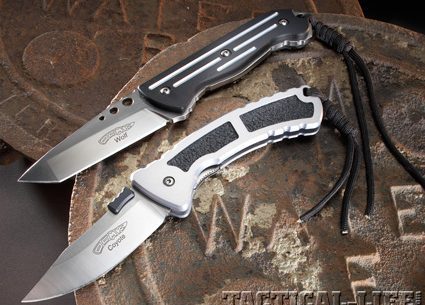