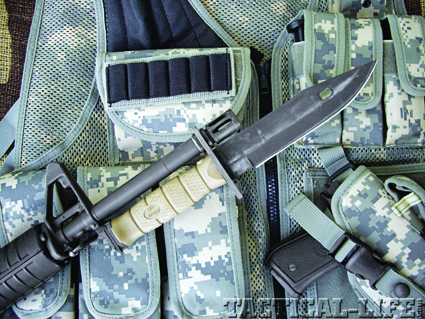 If it comes down to hand-to-hand combat, which would you rather have, a three-hour block of “Bruce Lee” kung fu instruction or a M-9 on the end of your rifle?

Only a few weeks ago the news media made a major story out of the fact the Army had announced they were dropping bayonet instruction from basic training. For those of us who have been around for a while, this really isn’t all that startling, as most of the Army’s training programs go in cycles. Bayonet drills were also one of the first things they dropped during the “kinder and gentler” period right after the Vietnam War. Some have spun this press release into a statement that the military was dropping the bayonet from issue to combat troops army wide. From everything I have been told, that is far from the truth.

As any infantryman, tanker, artilleryman, ranger or Special Forces troop will tell you, basic is barely a prologue to real combat training. All enlistees, no matter what their future role in the army, go through basic as an introduction to military life. Combat MOS’s (Military Occupation Skill) then go on to long periods of advanced training to learn their serious fighting specialties. Obviously, it is probably a waste of time and money to train the future post librarian to use a bayonet. It would seem much more logical to save bayonet and hand-to-hand skills for the dedicated combat training programs.

Many vets of the current Iraq and Afghanistan conflicts have also been quoted as saying they personally were never issued a bayonet. To assume from this that these weapons are no longer in the system would be incorrect. There is a matching M-9 on the “TO&E” (table of organization and equipment) for every rifle issued in an infantry company. For practical purposes, this is also considered the issue combat knife when one is required. The problem has long been that the army categorizes bayonets at the same level as rifles or handguns and requires much closer control over them than, say, combat boots. Having a troop lose or break a bayonet doing something stupid, and then not be able to account for it, can have serious repercussions for the careers of all involved. Using the “better safe than sorry” policy most officers work under, they simply don’t issue the bayonets stored in the arms room without an extremely good reason.

It is also a fact that combat in Iraq has been scaled back to something more like heavily armed police patrols than conventional warfare. Applying the lessons learned on your last battlefield to your future one doesn’t always work. While the M-4 carbine might have been ideal for street combat in Iraq, it is proving less effective at the longer ranges in Afghanistan. While the “low intensity asymmetrical warfare” may be the watchword of today, that doesn’t mean tomorrow’s troops won’t be standing off combined infantry/armor attacks by full divisions of the North Korean army. If and when that happens, bayonets might once more become very useful. 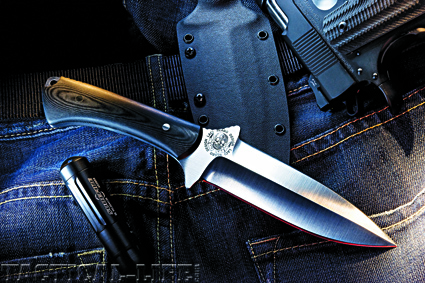 ALL ABOARD THE SZABO EXPRESS | Szabo Express Knife Review