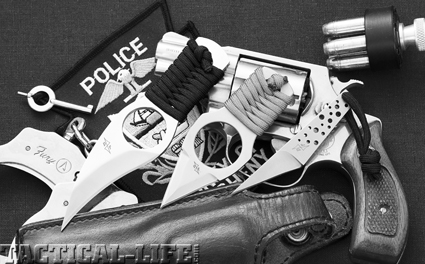 Left to right: Meyerco’s Claw, Broadhead and the sneaky little Thumb Drive. Great last-ditchers for when you’re in a bind.

After awareness, simplicity is the key to personal defense. If a given tool or technique is not simple enough to perform during training, does anyone really think that it will get easier in a fight?! In addition, I am not an advocate of the knife “duel” where two people square off and exchange slashes and jabs until one gives up due to injury or blood loss. The winner of such an affair is the one who gets to go to the hospital! To me, the knife is a last ditch, close-quarters tool that can be used to get an attacker to stop if the application of deadly force is reasonable based on the circumstances at hand. Blades are best deployed in situations where your opponent does not expect it. Several slashes can be more effective than a stab as many people have stated that they did not know they were stabbed during a fight, they merely thought they had been punched. A few slashes across the hands and arms might not be as fatal as a stab, but suddenly seeing your own blood leak from your body can have a very telling effect.

If the element of surprise appeals to you in regard to your individual security, then you really need to think hard about what type of knife you are going to carry for that purpose. Keep in mind, I am a big fan of folding knives, but to me they are EDC tools that are not intended for rapid deployment. Yes, with practice the folder can be used for combative purposes and Crucible’s Kelly McCann has documented a number of actual confrontations when the user of a folding blade deployed and used same to save their life and did not remember doing so! The common denominator here is repeated practice and how many readers are going to practice deploying their pocket folder to the point when it can be done without conscious thought?

Inexpensively Effective
Dirk Pinkerton operates a small shop in Wilson, North Carolina, where he makes his knives “hands on” one at a time. There is no CNC machining—just a love of knifemaking that was a result of Dirk’s fondness for knife collecting and friendships with law enforcement officers, firefighters and members of the Special Forces. Discussions with these professionals got him to thinking about what should go into a knife that would be used for “serious social purposes.” This has led to an interesting line of new blades being introduced by Meyerco Knives. Known as the Variable Series, these knives are tough enough to handle life’s challenges, but inexpensive enough ($15-$40) that you won’t want to cry if the knife is lost or left behind on an operation. Pinkerton and Meyerco have collaborated on six knife designs that span a range from the small keychain-size Thumb Drive blade to the self-defense-oriented Persian, an 8-inch knife with a uniquely curved blade, thus the name. 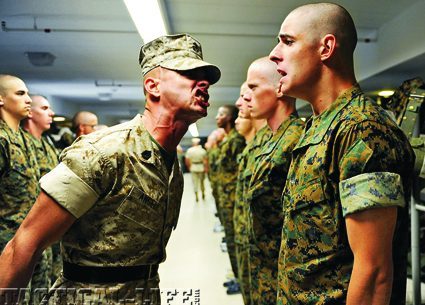