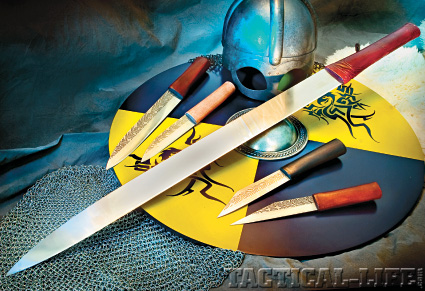 While arms and armor references frequently mention them, trying to pin down what a typical Viking period sheath knife should look like is a very difficult task. For starters, there is the spelling—seax, sax, hadseax, scramaseax or scramsax, take your pick. I’ve been told that “seax” is considered the English Anglo-Saxon version of the word. But according to many historians, the Saxons are supposed to have been named after the knives they carried, which would lead a person to think “sax” would be the preferred spelling. Given how few, if any, written records from this period exist and how much all of these languages have changed over the last thousand or so years, there is probably no way to ever really know.

Style & Size of the Times
After the name, the next big mystery is what a classic seax/sax should actually look like. If you visit many European museums, you easily find hundreds of knife blades varying from maybe 3 inches to over 2 feet long labeled as seax/sax. Unfortunately, the survivals of original handles, on the other hand, are few and far between. It appears very plain wood was the most common, with stag running in second place. None of the knives I’ve seen in exhibits utilized a handguard. Point styles vary from a basic spear to what is now known as a “broken back” clip, with all being single edged. Modern researchers tend to consider knives from 3 to 7 inches in blade length as everyday work knives and those over 12 inches as backup side arms for warfare. If I had to draw my own conclusion, I would suggest seax/sax was a generic term for many different single-edge style sheath knives much like “hunting knife” or “Bowie knife” is today.

Short or long, spear or clip, one of the best sources for a modern custom seax replica is from the forge of Michael Pikula. Michael tells me his interest in hand-forging Viking period knives began when he took a blacksmithing course in college. He met a full-time smith and discovered that it was actually possible to make a living forging. Other than that class and observing a number of other blacksmiths at work, he is self-taught. Michael is a classic jack-of-all-trades blacksmith, and as his website states, he can be “your one-stop source for gates, railing, fences, interior décor, tables, chairs, benches, fireplace accessories, sculptures, knives, swords and more!” 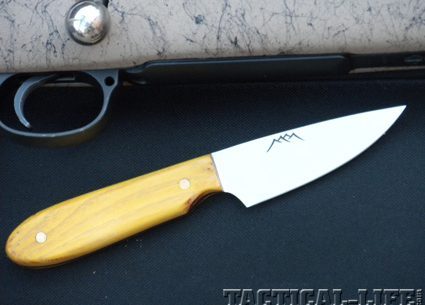 While arms and armor references frequently mention them, trying to pin down what a…