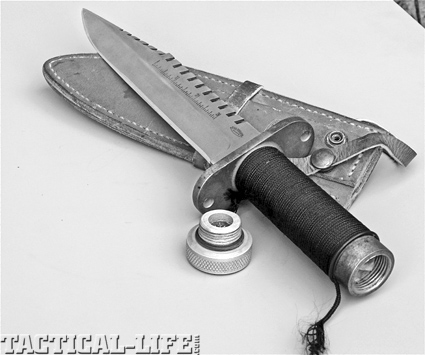 Mike England’s Model 1S has a compass in the butt cap and a cord-wrapped hollow handle. Note the 3-inch scale on the blade and its saw teeth.

The hollow-handled survival knife probably gained the most popularity from the Rambo films, especially the first one. Jimmy Lile’s First Blood knife was virtually a co-star in the film and became an immediate commercial success. I owned a First Blood knife and thought it showed good quality, though I thought it was too large to be practical and found its radical saw teeth not especially useful. But then again, I wasn’t Rambo, who was larger than life and needed a larger than life knife!

I had actually read First Blood in the Philadelphia airport waiting for a delayed flight to London when the book came out in 1976. The knife did not play as large a part in the novel. Ironically, I think I may have had a hollow-handled survival knife in my luggage, as I had a Randall Model 18 I used for some years during the later 1960s through the 1970s.

I’ve never been quite sure whether I liked the idea of the hollow-handled survival/combat knife or really considered it a useful blade. During the 1980s, when I was working with foreign counterinsurgency units, I used a Robert Parrish Survival Fighter. It was an excellent knife with the best saw teeth I’d used, and the blade stood up well to hacking. I had an E&E kit in the handle, the sheath’s pocket, and on my belt. I never used most of the items in the kit, though occasionally something would prove useful, but I did keep myself entertained at home when I wasn’t traveling by tweaking the kit. In retrospect, it probably would have been better to carry survival/E&E items in a couple of pouches on my belt along with a heavy-duty folder and a multi-tool. 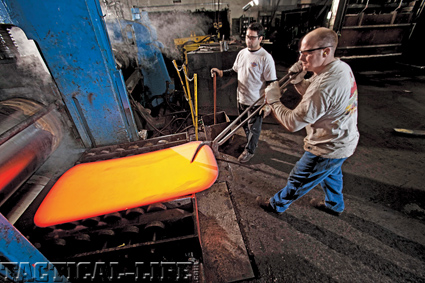