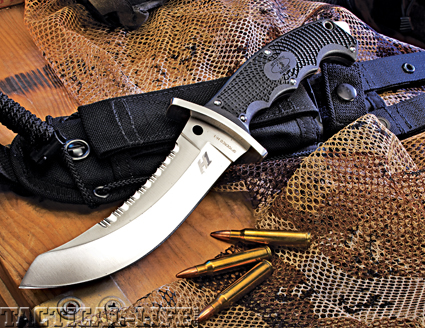 The Warrior has a long and interesting history. Having been developed from the ground up as a combative implement, recent input from Israeli Commandos to Spyderco has resulted in an enhanced battle blade for those who go in harm’s way.

The history…the why, how, what and evolutionary process of any piece of defensive gear is worth knowing and such is the case with the Spyderco Warrior. When Spyderco decided to introduce the most current rendition of this legendary blade, they tasked Special Projects Coordinator Mike Janich to find the truth regarding the knife and turn it into a pamphlet. “The purpose of the pamphlet,” Mike related, “is to document the evolution and history of the Warrior knife, to dispel the many myths that surround it.” The biggest misconception regarding the Warrior is that many believe the design was the work of famed defensive arts trainer Michael Echanis, but it was not. Echanis did see the original design model and provided some minor input, but it was not his design. The confusion is likely due to the knife’s developers naming one of the first production versions the “Echanis Warrior Knife,” due to his untimely death (actually murder) in 1978 while working in Nicaragua.

The idea was Randy Wanner’s, who trained with Echanis and acted as a mentor. Wanner was a senior instructor in Hwa Rang Do with a martial arts school in California. Wanner achieved an incredible level of skill and developed an exceptional understanding of human motor skills. Due to his edged-weapon training (as well as his training with Enchains), Wanner developed a distinctive knife design in 1977. It maximized Hwa Rang Do’s reverse-grip but also included blocking, cutting, and thrusting with the blade and a variety of hooking/ trapping techniques.

Echanis made his one and only contribution when Wanner showed him his original drawings. Wanner explained the blade would have a double edge like a conventional dagger, but Echanis suggested that the back side of the blade should have a serrated edge that would cut more efficiently, giving the blade greater field utility. Wanner met Bob Taylor while buying a holster for his Detonics .45, and he ultimately became the driving force behind the knife. Taylor, also a lifetime martial artist with combat experience in Vietnam, hit it off with Wanner and they quickly became training partners. Wanner told him about the knife and Taylor was instantly interested. 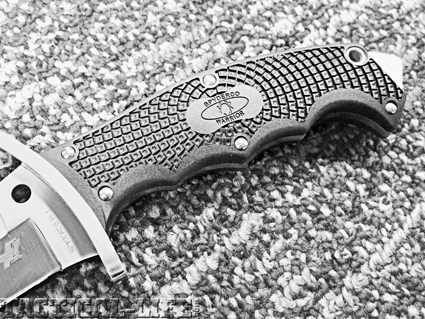 One size fits all! The finger groove grip of the Warrior is designed to fit a wide variety of hands in both a forward and reverse grip.

Taylor acknowledges 80 percent of the design was Wanner’s, but made three primary contributions to the knife. First, he suggested that the pommel be made of solid metal with angular surfaces to focus impact strikes. Taylor’s second contribution was the concept of a soft handle. Though the contours of Wanner’s handle design were ergonomic, it didn’t fit all hand sizes. To provide a superior grip when the handle was wet, Taylor suggested a handle material that would compress slightly under pressure. His final contribution was his investment of time, effort, and capital to make it a reality.

Over the years, Taylor commissioned a number of prototypes, few of which made it to any level of production. Taylor met a computer programmer with an interest in knives and explained the features of the knife design as they related to human motor skills. Using DaVinci’s famous “Universal Man” as a core reference, the computer expert wrote a 300-page COBOL program that analyzed the range of motion, leverage, and angles of the human arm. The program compared this data to the curves and angles of the knife design to optimize its functional ergonomics across the broadest possible range of human sizes and physiques.

The Warrior has a long and interesting history. Having been developed from the ground…