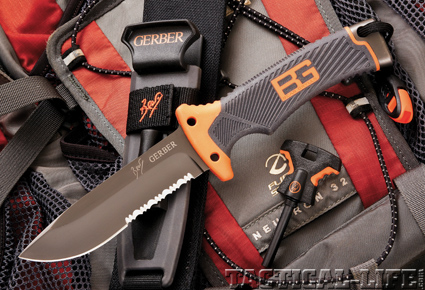 Unlike others, we put our review of the Gerber Bear Grylls Survival Knife on hold until they had a chance to address its early problems.

From the start, we have received letters occasionally from readers questioning the credibility of one writer or another’s evaluation of a new knife. In the old days, it seems like most comments came from people that had actually bought the product and felt their experiences didn’t match our story. Then came the web, followed by dozens of forums focusing on survival, bushcraft, or cutlery in general. Tactical Knives has its own website at www.tactical-life.com and, more recently, we added a Facebook page.

Now we seem to be receiving a whole new breed of complaint letter, email or post on our websites. One I received yesterday is a classic example. The reader was considering buying a DPx HEST folder after reading our feature in the November issue of Tactical Knives, but he did a web search for more information. What he found was a number of posters complaining about the “quality control” on the knife—whatever that means. I know I’ve personally run into many web experts that feel the materials and workmanship on a $10 Mora should be the equal of a $500 custom. To quote from the letter: “This is contrary to Griffin’s review. The only thing more disturbing than that is what appears to be the whitewash in light of the ‘overwhelming’ evidence of problems with this knife.” Overwhelming evidence? Let’s start with the fact that before Brian ever held that knife it was sent to my office for photo work. I did not observe any major problems with its workmanship.

One of the things you quickly pick up reading the forums is that posters seem to receive far more “street cred” for negative comments than positive ones. And street cred among their little cult groups appears to be the main goal of many of these people. You gain even more recognition if you manage to break the knife despite the fact you are doing something any reasonable person would consider over-the-top abuse. How many times have I read where some genius broke a pocketknife battoning firewood? Add to that the fact most posters use web names to stay anonymous and a few go so far as to wear hockey masks and other silly costumes to hide their identities. Who are these people that have the money to break one expensive knife after another to prove their points? Are they little rich kids with nothing better to do with their time, or is web fame so important to them that they will spend large amounts of hard cash to obtain it? Either sounds kind of pathetic to me.

A good example of how we really work at the magazine is the Gerber Bear Grylls Survival Knife. Yes, Gerber had problems with the butt cap on the first run and every “bush monkey” on the web had a field day breaking his knife. This magazine, on the other hand, put the article on hold until Gerber had a chance to correct the problem. We ran a reasonably favorable review of the knife, but old web posts never go away. Ten years from now people will still be doing “searches” and up will pop all those broken knives. And most will be from anonymous sources that have since moved on to other pastimes. After 18 years on the newsstand, Tactical Knives is fast approaching its 100th issue. Other than the “It Happened to Me” column, the stories written under a pen name have been virtually non-existent in this magazine. So, when you are doing those searches for valid information on a knife you would like to buy, just remember who was willing to sign their name to the story and who wasn’t. —Steven Dick

Florida bystander with pistol comes to rescue of Marine and wife.

Unlike others, we put our review of the Gerber Bear Grylls Survival Knife on…