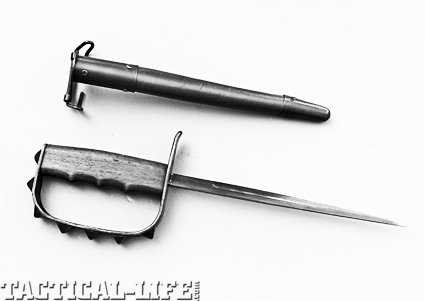 The M1917/18 Trench Knife along with its scabbard; note the “1917” pyramid-shaped guard protrusions and skull crusher.

One of the things that I found especially interesting was the array of edged and impact weapons used in close combat in the trenches. Even now, these many years later, the term “trench knife” evokes the idea of deadly cut and thrust at very close quarters. Since I was living in London when I first became interested, the first trench knives I purchased were some of those from Robbins Dudley. Over the years I’ve had others, including German and French ones, but my favorites became those used by U.S. “Doughboys.” Pershing’s American Expeditionary Force had an array of weapons designed for use in trench warfare, including the Colt 1911 pistol, Colt and S&W 1917 revolvers, Winchester Model 97 and Model 12 trench guns—among others. Sometimes, though, fighting was at such close quarters that a shotgun could not be brought into action, and use of the pistol might endanger other U.S. troops. That’s when trench knives came into action.

U.S. Model 1917/18
I had reason to get out my favorite, the Model 1917/18 U.S. Trench Knife, to shoot some photos for a book I’m doing in the Osprey Weapon series on U.S. military shotguns. For one of the artist’s plates we were going to portray use of the 97 Trench Gun, but I also wanted to show one of the Doughboys wielding his Trench Knife with an arm-pumping upward stroke at a German’s midsection. 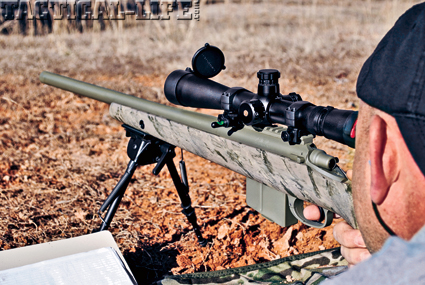 The M1917/18 Trench Knife along with its scabbard; note the “1917” pyramid-shaped guard protrusions…