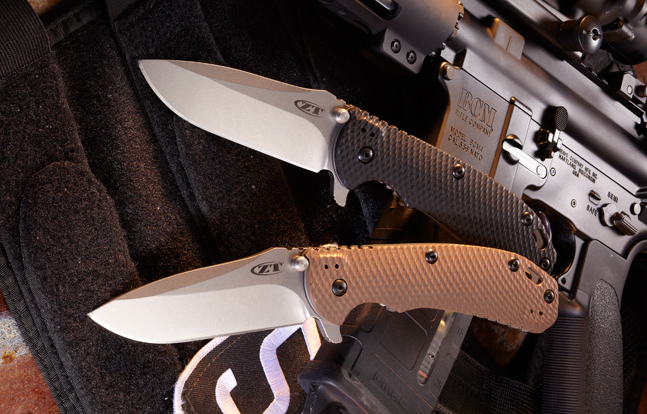 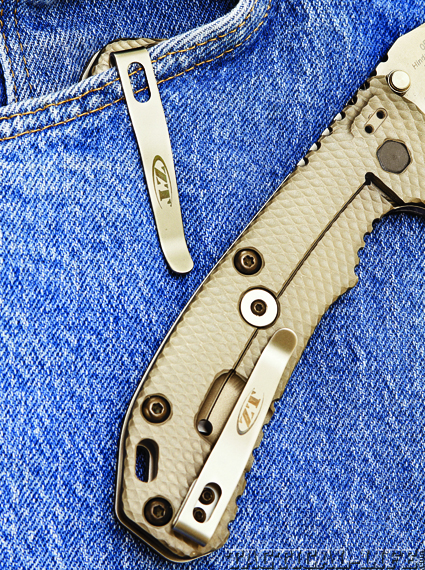 The deep pocket carry-clip is a welcome addition to the ZT Hinderer and helps maintain a low profile.

Zero Tolerance, the high-end tactical division of Kai USA, has hit one homerun after another with a flurry of folding and fixed-blade designs geared specifically for the warfighter. Using famed industry designers like Ken Onion, Strider and now Rick Hinderer, ZT is at the tip of the spear for small-production but near handmade quality tactical bladeware.

Having known custom maker and designer Rick Hinderer for many years, and wrote the first feature about his knives in TK. I was always impressed by Rick’s grasp of knifemaking technology and how to merge that into his highly technical but practical handmade knives. Rick’s direct experiences in rescue and firefighting have given him a practical edge over his competitors. He knows the design elements that a hard-use knife requires to be useful in the field.

The 0560 was announced at the 2011 Blade Show with much fanfare and the award for “Best Collaboration of 2011.” The 0560 is based of the XM-18, a custom combat folder that has quickly become Rick’s “signature” knife. The XM-18 is one of those pieces of tactical bladeware that are always seemingly unavailable at practically any price. The winning combination of a smooth, flipper actuated rugged framelock has been well received by end-users all across the globe. 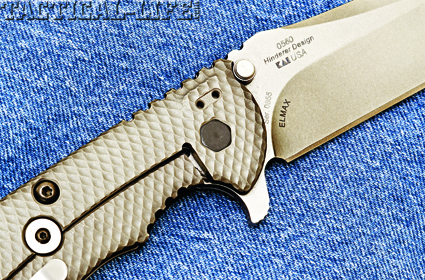 The lock bar stabilizer prevents the frame lock from being overextended when opened.

I had practically given up on trying to find an XM-18, and since Rick is several years behind on orders, I was thrilled to get a sample of the production ZT 0560 knife, which has a nearly identical shape but a few innovations of its own.

Zero Tolerance has had a pretty simple mantra since Thomas Welk, sales manager of KAI USA/Kershaw, envisioned the brand to develop hard use tactical knives designed by the best custom makers of the genre, built in the USA of the latest materials and using the best cutlery technology. That is exactly what ZT has done. From tip to stern, the 0560 exhibits some pretty radical materials and engineering that takes limited production knife performance to a very high level.

This is not Hinderer’s first rodeo with Zero Tolerance—Rick also designed the 550, a workhorse folder that bears a resemblance to the 0560, but has a more utilitarian flavor and feel. The 3.75-inch long blade of the 0560 is a brawny slice of 0.156-inch thick, laser cut ELMAX powdered stainless steel, and saber ground to a practical dropped profile. This useful blade profile has a reinforced tip, thick center spine for rigidity, and an overall edge contour that should prove easy to re-sharpen in the field.

ELMAX is very impressive steel for a hard-use knife. Basically, in my testing and the testing of others, it is stainless steel that behaves like the high-carbon tool steels but without the rust. This means it gets sharp, stays sharp, and can be easily resharpened. And it is brutally tough-without the potential for much corrosion. It is quite possibly optimum steel for a heavyweight tactical folder. A product of Bohler-Uddeholm, the European steel conglomerate, ELMAX was originally developed for the manufacturing of high-end injection molds in the precision plastics industry where corrosion and wear to a high-speed mold can cause thousands of dollars in damages to a manufacturer processing parts. Many modern plastics are using fillers and stabilizers to dramatically increase their toughness and these additives are highly abrasive and often corrosive-this is where ELMAX shines. A third-generation powdered metal, ELMAX is also a high Vanadium steel with 3% added to the alloy blend. ZT is so enamored with the performance of ELMAX they plan on using more of it in the future. A close friend of mine who makes a living forging carbon steel says ELMAX is among toughest blade steel he has used-surpassing most carbon tool steels in his testing. At RC 58-60 it is nearly unbreakable in normal use. The smooth tumbled blade finish is non-reflective, easy to clean, and resists speckling. The edge is thin and polished to a hair-shaving sharpness. Slicing challenging items like newsprint or nylon rope is no problem. 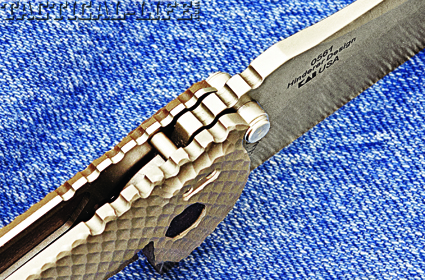 A massive frame lock bar holds the blade open under any and all field conditions.

ZT has utilized a unique and proprietary pivot bearing that opens incredibly slick with zero blade play. The flipper requires no wrist motion to open the blade-a quick trigger finger flick is all that is needed. This new bearing system, dubbed the KVT (Kershaw Velocity Technology), is silky smooth and friction free since the blade rides on captured ball bearings in nylon raceways instead of sandwiched with conventional washers. The blade wears thumb studs that can also be used to open the blade, but the flipper works so well and intuitively you will likely never go that route. The blade flies so quickly that beware, when you unlock the Titanium frame lock there is so little resistance on the blade it can fall on your fingers simply from gravity. I am positive you can get a decent cut if you aren’t paying attention. 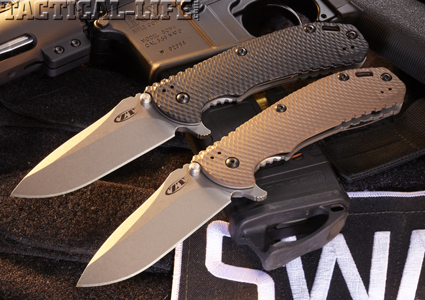 The Titanium frame locking side is marvelously 3D CNC-machined with a diamond pattern that is smooth to the touch but gives an enhanced grip when wet or oily. The Hinderer lock bar stabilizer is added to prevent over-extending and weakening the integral lock bar tension. To conserve weight and cut production costs, ZT opted to use a stainless liner and sculpted black or brown G-10 scale for the non-locking side of the knife. This keeps the weight of the 0560 to a somewhat manageable 5.8 ounces, which is about the upper limit of my personal tolerance for a sub-4-inch folding knife. Heavy knives aren’t always stronger and they have a nasty habit of being easier to lose, gravity can dislodge a heavier folder from your pocket more easily than a lighter blade. To alleviate this, Kershaw has redeveloped an excellent deep-pocket clip that brought back a few memories for me.

The deep-pocket clip was an innovation developed by a short-lived tactical knife company called Edge Design Inc. in 1998. I was a consultant on EDI’s folding knife project and part of our design parameters were to have a pocket clip that buried the knife deep into the pocket to prevent accidental loss. When training with the late combatives expert Bob Kasper, I learned why he stressed the importance of the deep-pocket carry clip as a way to hide the visible signature of the knife without any real loss of speed of withdraw. Since Edge Design’s demise, many makers and companies have since developed a deep-pocket clip and I am happy to see it on the 0560. It also happens to be reversible for right, left and tip-up or tip-down carry. The knife ships tip-up for the fastest draw stroke out of the pocket. 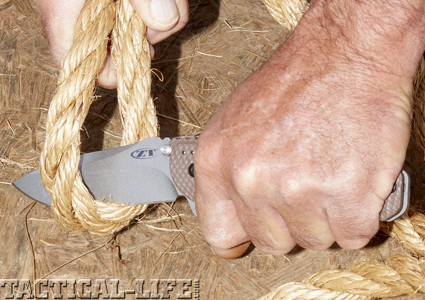 Using the 0560 brought out many of the nuances that Hinderer and ZT have incorporated into the design. The edge geometry is superb for a large knife as well as the pocket signature, it is just a little more than a half inch thick and the slightly oval shape, makes it feel smaller and more contoured than most other knives of its size.

In the field this knife is a workhorse. Every trooper I showed it to was impressed by the ergonomic feel and ease of opening. The overall build quality of this knife is higher than most “handmade” folders costing more. It is certainly better designed than the vast majority as a working tool. Unlike thumb studs and some blade holes, the flipper is easy to actuate with most types of tactical gloves-a big plus for the 0560 as a tactical tool or weapon.

The 0560 moves fast into action. Pocket draws are quickly executed and fast-the flipper really works well in conjunction with the stout blade’s inertia to open as fast or faster than an assisted knife. The lock is precisely fitted to the blade tang and there was no slipping or popping from use. Heavy fasteners, dual blade stops and the large pivot bearing ensure that this knife will hold up well in the long run. Drawing and hitting a practice target is easily executed under stress since there are multiple methods to open the knife and the bearing pivot gets the blade moving quickly. The flipper is also a large integral guard. It would be difficult for your hand to slip over the flipper and get cut.

The Zero Tolerance 0560 is a tremendous combat folding knife geared towards the professional adventurer and warfighter. It has all of the latest internal and external cutlery innovations and a design that has been shaped by decades of the highest-quality practical knifemaking by the designer and manufacturer alike. 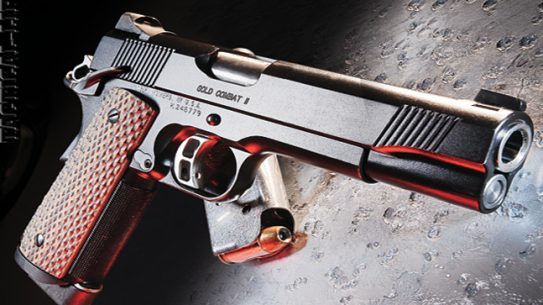