9mm terminal ballistics will always be a hotly debated topic online. Youtuber Garand Thumb put several popular rounds to the test against a ballistics gel torso, with some interesting results. 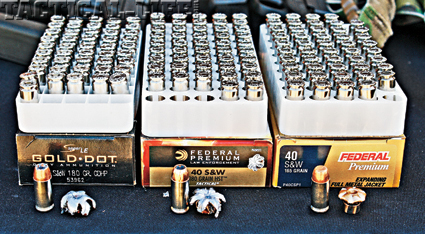 T​o properly understand 9mm terminal ballistics, it’s important to first understand handgun wounding mechanics. Due to their relatively low velocity, handgun projectiles can only wound by impacting tissue. In simple terms, to destroy tissue, a handgun bullet must touch that tissue. That’s why shot placement is king with handguns. Once we know that handgun bullets only cause damage by physically crushing tissue, it makes understanding their effects on the human body easier.

This also helps us understand the role of expanding projectiles in 9mm terminal ballistics. In theory, a properly made jacketed hollow point like a Speer Gold Dot or Federal HST will expand when it impacts tissue. The expansion means it will crush more tissue and in theory cause incapacitation faster than a smaller diameter, non-expanding round. Of course, a jacketed hollow point that doesn’t strike any vital structures won’t be as effective as a full metal jacket that pierces the heart. Remember, shot placement is king.

Ultimately, the test depicted in the video is a fun way to learn more about defensive ammo. While certainly not scientifically rigorous like the FBI protocols, you can still pull valuable information from Garand Thumb’s video.