First, let us recognize that people in the gun industry and America’s law-abiding gun owners are mourning this tragedy alongside every other American. And we want these senseless massacres to end. People misusing guns pose a huge threat to society, as well as to our Second Amendment rights. For example, Biden pushed more gun control in his speech following the Uvalde tragedy that requires some fact-checking. 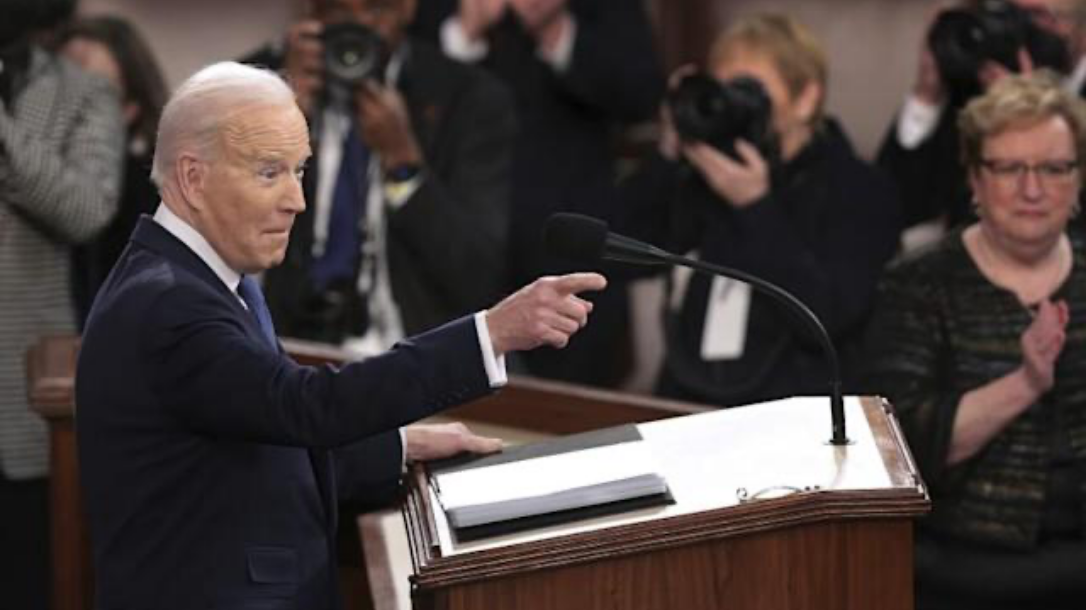 Following the horrible tragedy in which an evil young man murdered 19 children and two adults at a Uvalde, Texas, elementary school on Tuesday, gun-ban advocates across the country and around the world went into overdrive calling for more and stricter gun-control laws.

And as usual, the country’s head gun-ban advocate—President Joe Biden—joined the chorus. He could have presented a sober, fact-filled discussion of the problem that could prove helpful in protecting America’s children. Biden instead chose to concentrate on lies and half-truths aimed at vilifying American gun owners, gun manufacturers. Not to mention, just about anyone who is engaged in the battle to save the Second Amendment.

However, screaming for more gun laws in the wake of tragedy is completely misguided. Important issues like this aren’t solved by a series of political sound bites. Psychopaths killing children bring forth a very complicated, difficult problem and solution.

Now, let’s look at a few of the president’s errant “facts” from yesterday’s speech. We’ll take them one at a time to understand how he constantly deceives the public to reach his gun-control goals.

“As a nation, we have to ask: When in God’s name are we going to stand up to the gun lobby?”

Biden is directly calling out the National Rifle Association. Even though the group has done the most to protect gun rights over the past half-century. That so-called gun lobby is actually several million normal, law-abiding Americans who understand the Second Amendment. Likewise, these are people who have joined together to protect their essential liberties.

In fact, Biden and others did nothing but push for more gun control after the 2012 Sandy Hook murders. However, the NRA actually put together an entire program with the goal of protecting school children.

One of the NRA School Shield’s (nraschoolshield.org) recommendations is to harden our soft-target schools.

Yet Biden’s only answer is to ban guns for the law-abiding and make schools so-called “gun-free zones.”

These are nothing more than laws that violent criminals completely ignore.

NRA has also protected far more children than Biden or any anti-gun politician through its Eddie Eagle Gun-Safe program, which over the past 30 years has taught more than 30 million pre-K through 4th graders what to do if they find a firearm, likely saving thousands of lives.

“It’s been 340- — 3,448 days — 10 years since I stood up at a high school in Connecticut — a grade school in Connecticut, where another gunman massacred 26 people, including 20 first-graders, at Sandy Hook Elementary School. Since then, there have been over 900 incidents of gunfires (sic) reported on school grounds.”

This misleading statement is designed to make people believe there have been over 900 incidents in which crazed, armed individuals rushed into grade schools and killed scores of children. The vast majority of those are, however, are far less serious than Biden wants you to know.

Truth is, if there were 900 mass murders in schools you would have heard about every one of them in the anti-gun “mainstream” media. Most “school shootings” are more like these actual reports:

St. John’s University, Jamaica, N.Y.: Three men were attempting to rob a student inside of a dormitory when one fired a shot from a .45-caliber handgun into the ceiling, attempting to scare the victim of their robbery attempt.

University of Southern Mississippi: While sitting in his car in a campus parking lot, Blake Ballard, 22, unintentionally fired his handgun, hitting himself in the thigh.

While these are shootings on school property, they are far from the picture painted by anti-gun advocates.

“Marjorie Stoneman Douglas High School in Parkland, Florida.  Santa Fe High School in Texas.  Oxford High School in Michigan.  The list goes on and on. And the list grows when it includes mass shootings at places like movie theaters, houses of worship, and, as we saw just 10 days ago, at a grocery store in Buffalo, New York.”

In fact, such “gun-free zones” are inherently dangerous unless you are a criminal and take a gun there anyway.

Researcher John Lott, president of the Crime Prevention Research Center, summarized the effect of such zones in a 2018 Op-Ed in the Twin Cities Pioneer Press when he wrote: “Most gunmen are smart enough to know that they can kill more people if they attack places where victims can’t defend themselves. That’s one reason why 98 percent of mass public shootings since 1950 have occurred in places where citizens are banned from having guns.”

Actually, a congressionally mandated study of the federal “assault-weapon ban” of 1994 to 2004 found that the ban had no impact on crime. It concluded, “Should it be renewed, the ban’s effects on gun violence are likely to be small at best.”

That being the case, any rise in mass shootings afterward could not be attributed to the ban sunsetting.

“The idea that an 18-year-old kid can walk into a gun store and buy two assault weapons is just wrong.”

First, at the time of Biden’s speech it was not known how the murderer obtained his firearms. Despite that, the fact the gunman was 18 means he could join the military, vote and practice other constitutional rights.

As Judge Julius Richardson recently wrote for the majority following the 4th Circuit Court of Appeals striking down a law banning 18- to 20-year-olds from owning handguns:

“What in God’s name do you need an assault weapon for except to kill someone?”

The vast majority of the millions of AR-15-type rifles—what Biden calls “assault weapons”—owned by lawful Americans have never killed anyone, nor have their owners. Instead, they are commonly used for sport shooting, competition and range fun, as well as hunting and home defense.

“Deer aren’t running through the forest with Kevlar vests on, for God’s sake. It’s just sick.”

Not a lie, but this statement is patently stupid. Biden has repeated it over and over again in speeches in the past year and a half. Thus proving he doesn’t understand that the Second Amendment is not about hunting.

Another lie. In a 2015 study, the Crime Prevention Research Center compared the annual number of mass shooting deaths per million people in the U.S. to that of Canada and several European countries from 2009 to 2015.

The result? Norway led the world with 1.88 deaths per million, followed by Serbia, France, and Macedonia. The United States ranked eleventh.

“Why are we willing to live with this carnage? Why do we keep letting this happen? Where in God’s name is our backbone to have the courage to deal with it and stand up to the lobbies?”

Agree. Why doesn’t the president insist that every public school lock most doors when students are present, have at least one armed guard on every campus and implement other security measures that really would help stop shootings?

Sure, it’s expensive, but we protect our banks with armed guards. Is our money worth more than our children? That $40 billion we just sent to Ukraine could go a long way toward starting the school campus hardening process.

Biden and other politicians want Americans to believe more gun laws will be some magic wand to end these killings. However, the truth is that they are using these tragedies for personal gain—to get reelected.

Let’s stop them from trying to convince people that there is some simple solution. Instead, let’s demand they dig in and find solutions to the subtle, deeply rooted factors really at work here. We gun-rights advocates want these killings to end, too.

RELATED STORY: Joint Statement From SAF and CCRKBA On Uvalde

Legitimate, law-abiding American gun owners are today as outraged and saddened as everyone else by the horrible acts of a crazed murderer in Uvalde, Texas. The Second Amendment Foundation and Citizens Committee for the Right to Keep and Bear Arms join our fellow citizens to grieve the unimaginable loss suffered by the Uvalde community and the citizens of Texas.

The past 24 hours have allowed us to learn far more about the killer and the circumstances surrounding his deplorable act of violence. Unlike anti-gun-rights politicians including Joe Biden, who quickly exploited this horror to push an agenda aimed at diminishing the Second Amendment and shifting blame to millions of gun owners, we waited for more information.

If there is blame beyond that of the killer, it must be shared by political leaders whose policies have turned our public schools into soft targets, and by self-appointed activists and school boards that have resisted school resource officer programs, opposed and prohibited programs that train teachers and staff to provide armed first response in an emergency, while perpetuating dangerous “Gun-Free School Zone” laws.

President Biden demanded “commonsense gun laws.” We believe it is time for common sense, period. We spend billions of dollars on foreign aid. Likewise, we can provide millions of dollars to local law enforcement agencies for school resource officers. We protect our politicians with armed security. Let’s protect our schools to the same degree.

Taking Advantage of A Great Resource

Let’s take advantage of a great resource: our retired military and law enforcement professionals. They protected our nation and our communities. They can easily protect our school children.

Instead of demonizing gun owners and the firearms industry, bring them to the table and benefit from their knowledge. Together we can succeed where the gun prohibition agenda has disastrously and repeatedly failed.