Some weapons platforms have an inexplicable impact on you. They catapult you to somewhere else, make you feel like you’re better than you are and sometimes completely alter your shooting course. I am a precision long range-focused shooter with an insatiable interest in bolt-action rifles. I only morphed into this after shooting a semi-automatic rifle chambered in .300 Win Mag, much like the Petra that Falkor Defense offers. It’s funny how life works out because on top of producing that Win Mag beast as well as other top-of-the-line gas guns in other chamberings, Falkor Defense now produces one of the finest bolt-action rifles available on the market. 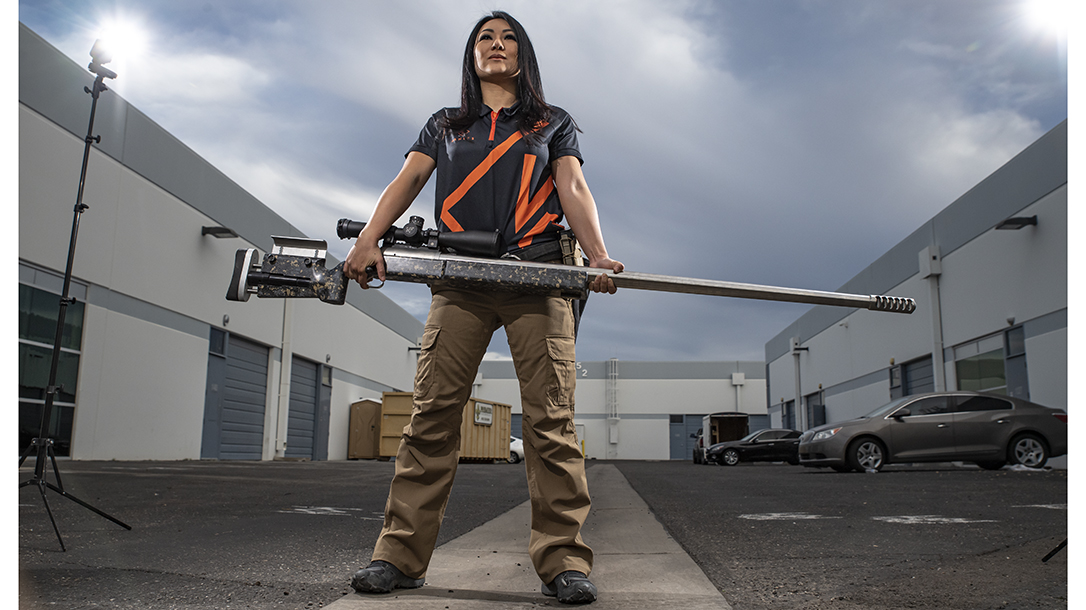 Falkor Defense’s founders are Jason and Melinda Sonju. Falkor, an offshoot of their main business at Sonju Industries, was born out of their love of firearms back in 2006—a story like many others. Originally called SI Defense, they rebranded to Falkor Defense in 2014.

There are many firearms manufacturers, and many good ones at that, but some have other advantages over others. In the case of Falkor Defense it stems from their longstanding experience in the aerospace industry where they provide critical components for DoD. Parts for missiles and other weapons and even parts for jet fighters such as the F-22 Raptor adorn Falkor’s CV. It doesn’t take a rocket (or missile) scientist to figure out just how critical—if not mission critical—proper design and engineering on such products is. Beyond that, the execution of manufacturing must be precise as well. They have done this for quite some time, and that ability to provide high-level components carries over into the Falkor brand and product line.

“When it comes to aerospace manufacturing, I think it brings a huge advantage when it comes to delivering a firearm…we’re taking all of that knowledge that we’ve learned over the last 20-plus years and we’re introducing it into Falkor, which ultimately leads to the consumer,” Jason Sonju said.

Without a doubt, Falkor exploded on the scene with the release of their .300 Win Mag semi-auto called the Petra. Ironically, I reviewed the Petra back in 2019 and found it to be an amazingly accurate and manageable rifle. In fact, it’s soft shooting, which is a mannerism you don’t associate with .300 Win Mag. This is no easy task because of the pressures associated with the Win Mag cartridge. It wants to destroy everything around it, including the firearm that it’s discharged from, so some serious engineering and design comes into play. “When it came to the Petra, it really separated us from a lot of companies building ARs,” explained Jason Sonju. “When it comes to big calibers, whether you believe it or not, it affects people. To be able to take a round that size and put it in an AR platform was huge for us.”

Outside of the devastating Petra, Falkor also produces other, smaller AR-patterned rifles, carbines and PCC’s. The high standards associated with Falkor’s ARs embodies accuracy, reliability and stunning good looks. Falkor’s design is just different from other companies, and it’s immediately apparent. This is no easy feat. Once you go down this path, you must stick to it in order to maintain brand and product consistency. In the end, it’s time consuming and well, expensive. “I believe that our designs are very sexy and I think that it’s geared towards what I believe most people want. They want a sexy, hot looking, different gun that they can be proud to say this is mine,” said Melinda Sonju. “When you start putting curves into things, all of a sudden, the price and the value of the product goes up…straight lines are way cheaper, typically. So, we didn’t cut any corners.”

It’s easy for any manufacturer to stick with what it knows. A formula that has been well honed makes for easy work, comfort and predictable efficiency in the manufacturing process. This can also lead to the lack of innovation, a near death sentence in the current firearms arena. Falkor has taken on a new endeavor, and they’ve done so with zeal, literally throwing caution to the wind in an effort to pursue a longtime passion while staking formidable claim within a space that is difficult to conquer.

In 2020, Falkor introduced their 7even bolt-action receiver. It’s an amazing action even in the company of other longstanding, deep-rooted manufacturers. It won our sister publication’s Ballistic’s Best award for best bolt-action rifle in 2020. While it was a complete rifle in conjunction with their CSS chassis, the action carried the load by outshining the accompanying chassis and the other actions from competitive manufacturers.

You may wonder why Falkor Defense would take such a risk as entering the precision space. The answer is a simple one. Passion. Melinda Sonju grew up using bolt-action rifles. “When I was young, we were out in the South Carolina/Mississippi area shooting .22s. So, I grew up shooting .22s (bolt-actions). I love ARs now, but they are very intimidating. It’s something I didn’t grow up with. When I started hunting, I obviously felt incredibly comfortable with bolt-actions. Bolt-actions are my love. I love the way they feel…. I would have a hundred different ones from other manufacturers if I could,” Melinda Sonju said.

Jason Sonju is developing a love for the platform, admitting that the undertaking was challenging to say the least. “Bolt-guns are something we always wanted to do…It was scary…because there’s so many awesome brands. We had this mentality and we still have it to this day, if you’re going to come out with something, it has to come out and it has to be one of the best.”

It Takes Time to Get Things Just Right

The 7even underwent two years of development. Along with that time came lots of money invested into the project along with much personal and company time investment. I, along with many of you, likely lacks understanding of what is needed to develop a new product at this level. At face value, it seems like a walk in the park especially when the product isn’t “new” per se. I mean the bolt-action has been around for many decades so how hard can it be? The Sonjus answered that question.

“It looks basic but, let me tell you, there is nothing basic about it when you start engineering and designing it and trying to get it to work. We did it alone. Without drawings or models. We had no one telling us exactly what to do,” Jason Sonju said.

“This wasn’t something that just fell in our laps, there was some blood sweat and tears on this. A lot of money was put down to make something that I would love for someone’s great-great grandchild to go shoot something with,” Melinda Sonju said.

The 7even action is but only part of the precision equation. In my personal opinion and based on what I’ve seen inside the Falkor skunkworks lab, I believe they will be known for making some of the industry’s finest precision bolt-action rifle parts, accessories and components.

The ROE chassis just released, and it brings the type of adjustability you’d expect from a competition-type chassis, but Falkor has taken things a step further by adding a forend that can be lengthened and shorted. The forend was the most technologically advanced for a short period because Falkor was the first to adopt the new RRS R-LOCK attachment interface. This is basically a series of circular cut-outs in the forend that allow a bipod or tripod to lock into each slot, providing security for the attachment. The ROC chassis also features weight kits for placement all around the chassis to provide optimal balance and weight, adjustable mag release, thumb rest, top cover and even rail skins.

We had the ROC chassis available for this year’s Ballistic’s Best competition, and all the evaluators loved it. It scored high marks and really shined among its competitive peers. The package was enough to land it in a solid second place out of 10 rifles, being beaten out by only the Accuracy International and by fractions of a point. That’s a strong showing for a newly developed platform.

The future looks bright for Falkor’s precision pursuit. A new action, the MT 7 is set to debut soon. It features the insane slickness of motion as the 7even. But, is de-featured a bit to reduce cost for the more cost-conscious buyer. The top rail has been removed and the user can install their own.

There is also an even larger endeavor in the works, one that no one will see coming, and will set Falkor up to cover just about every precision bolt-action segment that exists. On top of that, Falkor continues the composite-wrapped Dracos barrel lineup along with muzzle devices as well.

It looks like the only real challenge Falkor will have is making sure that everyone knows about the breadth of their lineup. When a company steps into territory that they are not known for, people find it hard to grasp. We are unfortunately creatures of habit—more psychological than actual. Part of the fun for Falkor will be re-educating not only their dedicated customer base. Additionally, educating the precision masses as well.

Falkor truly brings a unique set of qualifications to the table. They are a major aerospace manufacturer, able to bring that know how to the firearms industry. Whether it’s gas guns or bolt-action rifles, Falkor designs at the highest levels and executes with a relentless passion. This shows in their entire product offering. For more information, visit falkordfense.com.

This article originally appeared in the March/April Edition of Tactical-Life, which is available online for purchase! You can also purchase additional back issues or a print subscription at our web store.