Pistol compensators. They’re extremely popular right now, to the point that several manufacturers are now offering in house compensated guns. But do they actually work?

All compensators work in largely the same way. The ports in the comp redirect some of the expanding gas behind the bullet. This helps flatten recoil and keep the gun on target for faster follow-up shots. We know that comps work well on rifles, and thanks to years of competition shooting, we know they work well on hot-rodded race guns. But what about “normal” rounds?

The Difference Between Compensators and Porting

Pardon a bit of technical jargon here, but this is also important. Compensators and barrel porting are not the same things. Barrel porting are cuts into the barrel that go all the way through. Theoretically, they should work the same as a compensator. The problem is that in actuality they often don’t. If done poorly, barrel porting can shave lead and copper off the bullet and make the gun less accurate. On the other hand, a compensator is an unrifled portion of barrel or attached to the barrel. It has what’s called an “expansion chamber” which is larger than the diameter of the barrel as well. Proper compensators don’t shave lead, and are even safe to use when shooting from retention, although they might be more exciting.

Many firearms related tests are subjective in nature. “This feels better” or “this seems like a better trigger” are often our measuring sticks. That’s the case as well when talking about pistol compensators. However, thanks to the ubiquitous slow motion camera in everyone’s pocket, we can add a bit of objectivity to our test.

In the video, we use a slow motion camera to compare the muzzle flip on three guns. All three are S&W revolvers firing .357 Magnum ammo from Remington Ammo. The first is a 586 L-Comp, which features a single port expansion chamber compensator built into the gun. Second is a 686+ Deluxe, which is identical to the 586 L-Comp but lacks the comp. Last, for comparison purposes was a 686+ Pro Series with a 5 inch barrel. The on camera test is simple: fire two shots from each gun. The first, the shooter won’t control recoil and let the gun ride. The second shot, the shooter will control the recoil. Then using slow motion, we can compare which gun recoils the highest, and which gun returns to target fastest.

Yes. As you can clearly see in the video, the compensator pistol has less muzzle flip and returns to target faster than the other two pistols. That’s as clear a case as you can make for the effectiveness of these compensators. Subjectively, I’ve fired well over a thousand rounds through the compensated 586 L-Comp and about 600 through the un-compensated 686+ Deluxe. The felt recoil impulse on the comped gun is noticeably. This is also true when comparing my compensated Beretta APX Combat vs my standard Beretta APX.

Regardless of whether you’re shooting super high pressure magnums or just regular old 9mm or .38 Special, pistol compensators work. Whether or not you want one is up to you. 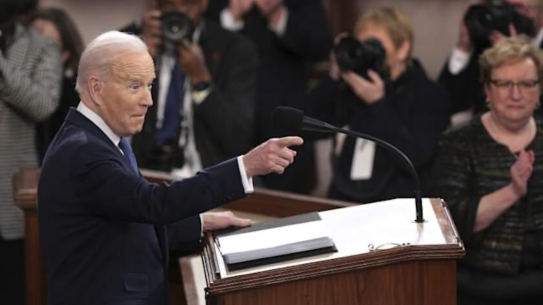 Fund the Police. In the State of the Union, President Biden reversed the anti-police...