In the final quarter of 2021, the International Defensive Pistol Association (IDPA) released a survey regarding the topic of appendix carry in IDPA. The results are in and the majority says yes! 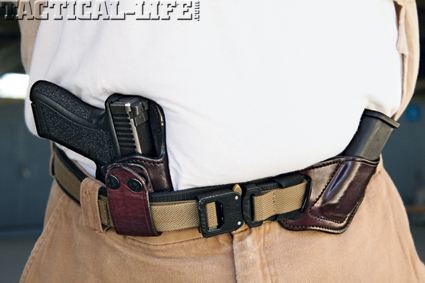 Why Does Appendix Carry in IDPA Matter?

Appendix carry (AIWB) is the practice of carrying a firearm forward of the hip bones, for example at the 1 o’clock position. It’s an extremely popular method for carrying a concealed firearm. In fact, the history of AIWB dates back for as long as people have been carrying firearms. As such, it would make sense for the defensive shooting sport to allow AIWB.

Unfortunately, there were some pretty significant road blocks to getting appendix carry in IDPA. Members of the sport’s leadership were openly critical of the idea, going so far as to say it will “never happen.” But near the end of 2021 it appeared like something had changed.

The AIWB Survey and Results

Shortly after Thanksgiving, competition shooters started posting about a survey on IDPA’s website about allowing AIWB in the sport. News spread rapidly, with state and national champions encouraging their follows to participate. The fact that IDPA’s leadership was willing to hear from their members on this issue was encouraging for a lot of shooters.

Last week, IDPA HQ announced the results. 68% of survey respondents indicated they wanted to allow appendix carry in IDPA. That’s a greater than 2/3rds majority of responses. Additionally, the 2/3rds majority also favored keeping the holster on the body during loading and unloading. One of the survey questions had asked whether or not, for safety purposes, the holster should be detached from the belt then re-attached when loading and unloading. Since loading/holstering is when most people are likely to accidentally shoot themselves, it made sense that IDPA would want to mitigate that risk. However, the proposed method of mitigating that risk didn’t make sense. Taking the holster off the body and putting the gun in it is likely less safe than just carefully holstering at the appendix position.

The Future of Appendix Carry in IDPA

Does this mean that AIWB is coming to the defensive gun game? Maybe, but also maybe not. While the survey is encouraging, IDPA is under no obligation to actually enact a rule change allowing appendix carry. It’s possible that the sport’s leadership could say that only a small percent of the members actually responded to the survey, so it doesn’t really represent the interests of the membership. However, many members are hopeful that leadership will listen. AIWB is extremely popular for concealed carry. It would only make sense for the defensive shooting sport to incorporate it at this point.